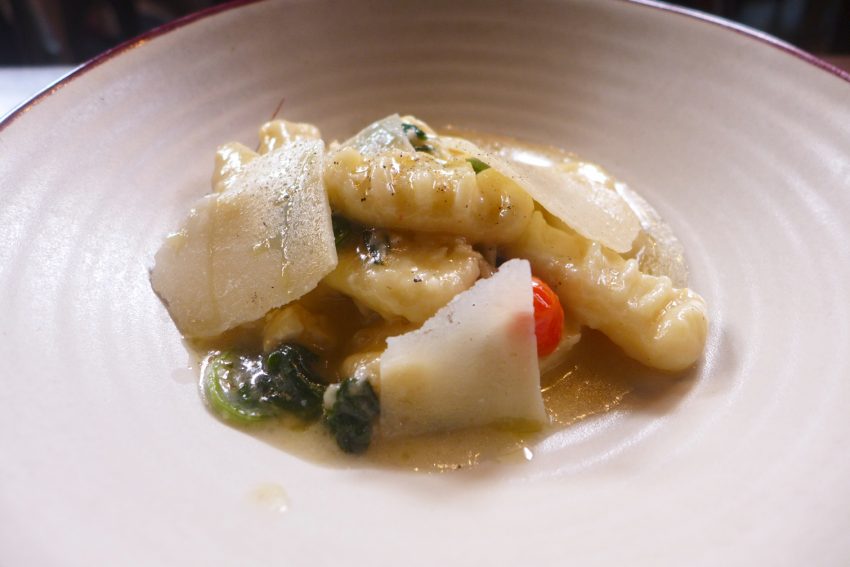 I had meaning to try Prologue for the longest time, but parking had always been a problem. No matter how late we attempted to have lunch at this place, it had always been full. Then one fateful Saturday, we discovered that opting for an early lunch was a brighter idea. Don’t be too early though, as they only serve lunch from 11 onward.

As small as I thought it was from the outside, the restaurant was very spacious on the contrary. I loved how this food place had been converted from what I presume was a former residence, from the bar by the entrance to the high-ceiling main dining space. The kitchen was open for everyone to see and admire, including their very own pizza oven.

There was such a warm welcome upon our entry, as though we were regular customers instead of first-time guests. We were immediately directed to an empty table, which I thought was cramped at first but I later appreciated as its location allowed us to admire the entirety of the restaurant, including a direct view of the kitchen. After placing our orders, we were provided with some complimentary bread. I didn’t try it as I prepped my tummy for more delicious things to come, but Mr. B enjoyed it.

Our appetizer was some arancini (P280), or some fried risotto balls. I loved their arancini, with the oozing mozzarella. Although I felt it lacked some salt, it was creamy and crunchy. It also paired well with the pomodoro sauce.

The potato gnocchi (P390) was served next. These potato dumplings were very pillowy and delicate, and I enjoyed the creaminess that the parmigiano shards provided. I also loved the punch of garlic in the sauce as it made its presence known without being overpoweringly so. I appreciated the saltiness that the feta provided too. I only wished there was a bit more cherry tomatoes to cut through the fattiness of the dish, but all in all, I loved it.

Our prosciutto rucola pizza (P550) came last, and frankly, it was a dish that took quite some following up to be served. I loved the pizza dough, which was thin enough without being cracker-style (I’m not a huge fan of cracker-style pizzas). The prosciutto slices were indeed very generous. The arugula sitting atop the pizza, surprisingly, was not bitter, which was not exactly what I was hoping for as I wanted that peppery bite provided by these greens. However, I appreciated that the pizza was cut before the arugula was placed on top. It was very thoughtful, as doing so made it easier for us diners to separate one slice from the other.

I also enjoyed my cold mixed berry tea (P85), but it was served unsweetened. They were kind enough to provide some sweetener upon request though.

I truly admired the quality of food that they served, along with the wonderful service, a great ambiance and reasonable prices, that it wasn’t long before we were back.

It was a Sunday morning when we headed to Prologue for breakfast. Not only was our favorite breakfast spot was sadly damaged in a fire incident, but we were also on the lookout for new breakfast places.

As with our first visit, the staff were warm and welcoming. Contrary to our previous experience, the space was empty, and we were allowed to choose our table, and opting for one despite having a reserved sign on it.

Our cups of coffee (P150/cup) arrived quickly. Each was served with a biscotti on the side. It was, by far, the best coffee among the many coffee shops or breakfast places we’ve tried: it was neither sour nor bitter. It was just right; it was perfect for me. Mr. B’s latte was very similar to my cappuccino, although I would say his latte edged out a bit.

I was surprised to find that the pastrami on rye (P450) was a breakfast item, and I debated internally whether to order one as it felt more like a lunch meal. It had been some time since I had some pastrami so I went for it, but I immediately regretted it upon first bite. The pastrami was sweet, and never in my life did I have pastrami like that. It was more akin to ham, rather than those gloriously-thin slices of spice-crusted cured beef that I was hoping for. I was very disappointed with the dish, but the only saving grace was the truffle chips that were indeed very good (and very crisp!).

Mr. B’s croque madame (P390) was very difficult to eat, as the bread was too difficult to slice. It was less creamy than I wanted it to be, and the cheese in the bechamel did not stand up to the stronger flavors of the ham. The side salad was not dressed too.

After having had an amazing lunch with them, I couldn’t help but feel dismayed with the breakfast that we had. I wonder whether we just didn’t make the best picks from the breakfast menu (except from the coffee), or if it would be better for us to stick to lunch meals instead. I’m sure that this wouldn’t be the last of our visits though, as I’d like to try more of their dishes in the future.