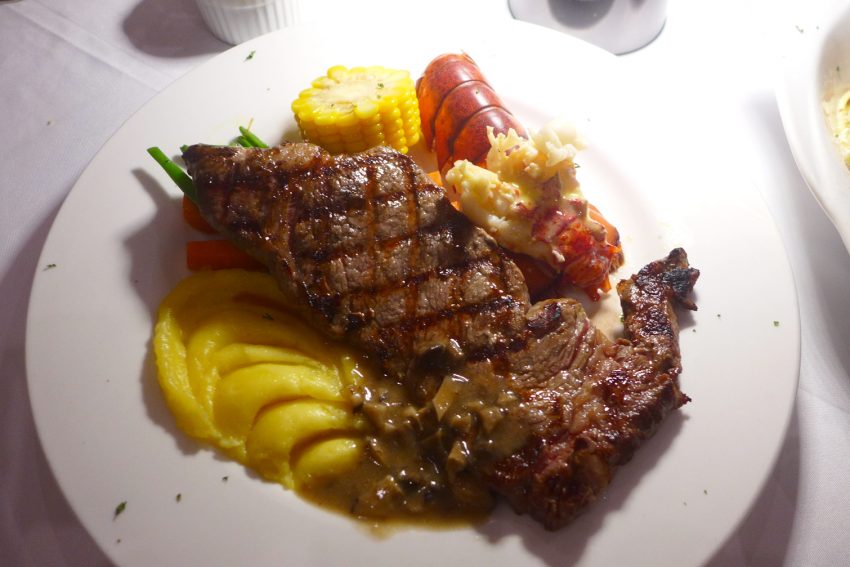 We put off having meal at Melo’s for something special, and that wonderful day finally came. We didn’t make any reservations, and boy, there really was no need for one — the restaurant was empty. The restaurant had an old school charm that was quite visible upon entering, although frankly, it wouldn’t hurt for it to update its decor. Never had I experienced dining in an empty restaurant, and we remained the only patrons during the entire course of our meal. With a very romantic ambiance and two servers at our disposal, it was certainly a very memorable dining experience.

We began our meal with some pate, served with Melba toast. It was amazing. Its flavors quickly reminded me of haggis, a Scottish specialty of sheep innards. This was rich and peppery too, and the crunchy toast complemented the smooth texture of the pate.

The bread was also very soft and very good overall, but I was a bit disappointed that the butter that came along with it was not as spreadable as it should have been. The cream of mushroom soup was indeed very creamy. It lacked the flavor of mushrooms though. The Caesar salad had too tart a dressing; I wished there was some saltiness to cut through the sourness.

But the highlight of all this was the ribeye steak. Admittedly, the steak was seasoned very well. As the restaurant was dimly-lit, I couldn’t see the cooking properly. We requested a medium-rare one, but from what I saw, it was medium. I was a bit disappointed that the steak was unevenly cooked as some portions were rarer. It was, however, tender. A tender steak that’s well-seasoned was a winner for me, and for that, I really enjoyed this main dish.

Since our lunch course was a surf and turf, a lobster tail came along with our steak. This one had a very strange taste — I wasn’t sure whether the lobster had gone bad or there was a spice or an herb that they used that didn’t sit well with my tongue, but it was certainly the worst lobster I’ve had in my life.

The mashed potatoes that came along with the steak and the lobster were superb too. It was very creamy, which was a contrast to the vegetables that still had crunch (yes, I appreciated those vegetables that were not overcooked). I honestly wasn’t able to taste the creamy cognac sauce that supposedly came along with the main course. In hindsight, it might have been better if they served it on the side, in order to allow the diner to pour as scantily or liberally as desired.

The risotto was brought to the table a tad later than the rest of the main course. The rice was cooked well, however, it lacked the creaminess that I usually associated with risotto laden with parmesan cheese. It was crazy that we even ordered some carbonara, which we later regretted. It was good too, but with the steak and the abundant side dishes, we were too full to appreciate it.

A creme brulee finished our overall very decadent meal. After all the cream-laden components of our lunch, its kick of citrus was a wonderful respite.

In general, I enjoyed this experience at Melo’s. There were little tweaks here and there that they could do to improve things, but overall the dishes were mostly good. Our servers informed us that all the food were made in-house, unlike other branches that use a commissary. The service was also superb. Whether it was due to their training or because we were the only ones there, I don’t know; I was just impressed.

More food finds in Quezon City next time. Until then, happy eating!