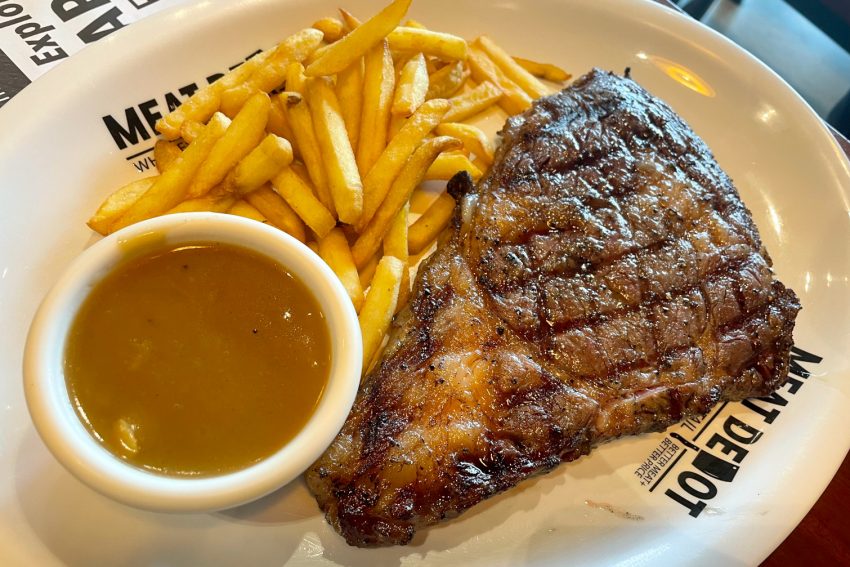 “I want steak” were Mr. B’s exact words. I knew we couldn’t afford a proper steakhouse on an ordinary day, but it was difficult not to yield to his sudden craving. After all, he wasn’t someone who craved a certain food out of the blue. We also didn’t want to head to the cheapest “steak” places, because most of the time the quality of the meal suffers greatly.

Our compromise was to head to Meat Depot, a store in Vertis North where various cuts of meat were sold: beef, pork, lamb and even sausages. A dining area was available to those like us who wanted these chunks of meat cooked on-site. The mechanics were simple: choose some meat and pay for your chosen cuts at the counter, where your preferred doneness, as well as your side dishes and sauces would be indicated on a piece of paper.

The selection was limited for our late lunch; the favored black angus variants were mostly not available. Don’t make the same mistake as I did as I initially chose from the freezer section; the chiller section was the one closest to the counter. We ended up getting a porterhouse and a ribeye, which we ordered with fries and some mashed potatoes. We also opted to try both the mushroom gravy and the spicy pepper sauce. As usual, Mr. B had to have an additional serving of fries.

The seasoning of both our steaks was spot on, and in that regard, I was genuinely impressed. The pitfall, however, was the cooking of these steaks. We prefer our meat cooked medium rare, but the ribeye was definitely not evenly-cooked. The edges were almost well-done, but some portions were rarer than our preference. The meat was quite tougher than I hoped — whether it was the cooking or the meat itself, I didn’t know. The porterhouse, despite the bone, was cooked slightly better, although it still wasn’t the quality of cooking that one expected from an establishment specializing in steaks. Perhaps it was a question of cooking technique, perhaps the grill temperature was too high, or perhaps the meat cuts were simply too thin to properly cook the steak. The aroma, though, of a steak cooked from a grill was very salivating.

The fries were crisp and stayed crisp the entire time. It was honestly my first time to pair fries with steak, a rendition of the French steak-frites, and I thoroughly enjoyed it. Good thing Mr. B ordered an extra serving of fries ahead of time! My usual preference with steak was mashed potatoes, and their version failed horribly. It was terribly underseasoned, and I was truly disappointed. The sauces were nothing to write home about. However, I have to say that I am not a fan of sauces on my meat so I am a little biased here, but to be honest, their steaks were seasoned so perfectly that the sauces were totally unnecessary for me.

As a casual joint, the place was more than pretty with its industrial decor. The staff were not the friendliest but they were courteous. I only wished the store provided ceramic plates instead of the plastic ones, since the rendered fat solidified quite quickly on the plastic plates…and eating steak with a greasy mouthfeel was just not the best experience.

We returned to Meat Depot, hoping to get another carnivorous fix. Again, we ordered some ribeye, my favorite cut, but opted to have lamb chops and some sausages this time around. The fries were staples, but Mr. B wanted some pasta on the side as well.

The ribeye was still not impressive — it was still well-seasoned but the cooking was just another story. We requested the lamb chops to be cooked medium rare (because I was too terrified that they would be underdone if I requested for rare), and they turned out to be fabulous. It had been a while since I had some lamb chops, but these were superb: the cooking was perfect and so was the seasoning. Of all the things I have tried here, this was by far the best, and I would gladly have them over and over.

The schublig was also good, with a crisp casing and a flavorful interior, although I would love for these links to be paired with mashed potatoes instead. On a side note, having these sausages cooked on site was a little less value for money since the cooking charge was ~P100 for a pair of sausages worth P200-something.

I’m happy to report that the fries were still wonderfully crispy. The garlicky pasta which was akin to an aglio olio was a little undercooked (a lot firmer than al dente — a minute of two would have made it perfect) and leaned toward being too greasy. It wasn’t the best and I would certainly be sticking to the fries as my default side dish from now on.

That’s it for now. Happy eating!