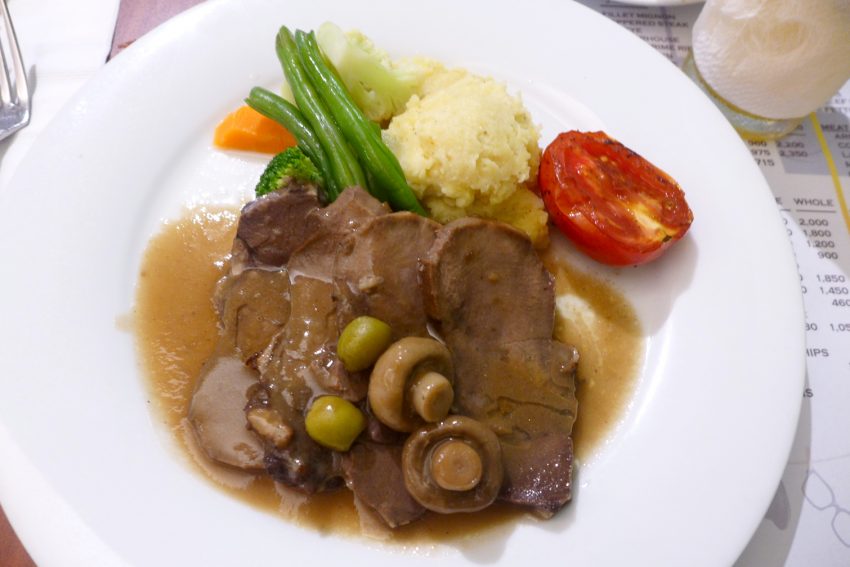 Mr. B wanted to have another go at Alba, but I had to put my foot down and asked that we try something else instead. Despite being an odd hour, Mario’s parking was still full, and we almost skipped it, except a slot across the street suddenly opened up. Comically, once we got to the entrance of the restaurant, two parking spaces became empty.

A staff member (I wasn’t sure if he was a valet driver or a guard) endorsed us to a server who was unsure where to seat us. We chose a table closest to the bar, as it seemed that the chaos upped as we got farther inside. No menu was handed to us. Instead, we had to content ourselves with the paper place mats where the menu was already printed on — it was a bit tacky considering the overall restaurant vibe but it certainly did the staff some favor. The lineup of dishes was quite confused: there’s paella, yet there’s pasta and some meat dishes as well. Mr. B would have loved to have some paella, but our server somewhat dissuaded us by suggesting that it would take a long time, without even asking whether we’d be willing to wait. In the end, we settled for some calamares for appetizer, and some pollo iberico and lengua con setas.

While waiting, we were graced with a small cooking show courtesy of another table that ordered some dessert. We watched what I presumed as mangoes get caramelized and be flambeed. With the short show over, we realized that it was taking longer than usual to get our drinks. I was excited when my dalandan shake arrived, but lo and behold, the bartender seemed to have forgotten to put some sugar in. Mr. B’s lemonade was so much sweeter than mine.

Our calamares arrived and it was quite a generous serving for an appetizer. Unfortunately, the squid pieces were covered in too thick batter. They were a bit overcooked, rendering them slightly rubbery. The tartar sauce was superb, however. I would assume that there was an additional egg yolk in that sauce that made it extra creamy. It was truly delicious.

We were shocked to find out that our main courses were actually plated ones. We initially expected that the main courses were for sharing, as nothing on the menu suggested otherwise. While our server asked us for sides earlier, it still didn’t occur to us that the meals were plated. Speaking of sides, we chose mashed potatoes for both, yet what arrived was one with mashed potatoes and the other with garlic rice. (I personally do not like garlic rice, but thankfully Mr. B was cool with it.)

The pollo iberico was huge. It was almost half an entire chicken! The meat was loaded with herby flavors, and the jus that was served alongside it was equally flavorful. The chicken was very succulent, even the breast portion was juicy. It was truly very good value for money.

The lengua con setas was also bountiful. There were four slices, which paled in comparison with the chicken, but it was a lot more reasonable than other restaurants serving this delicacy. The slices were quite thin but still acceptable. They were also a bit bland, but nothing that a dash of salt wouldn’t fix. The mashed potatoes were magnificent — they were creamy and smooth but still had some body.

By the time we finished both dishes, we were extremely full. The generous portions of meat and veggies, along with their fantastic flavors, made for such satisfying meal. The place looked upscale at first glance, but it didn’t feel like one as the noise from other tables echoed in the small chambers. The service was lousy — whether we were simply unlucky with our server or not, we did not know. Still, we’d like to go back and try that paella someday.

Until next time. Happy eating!