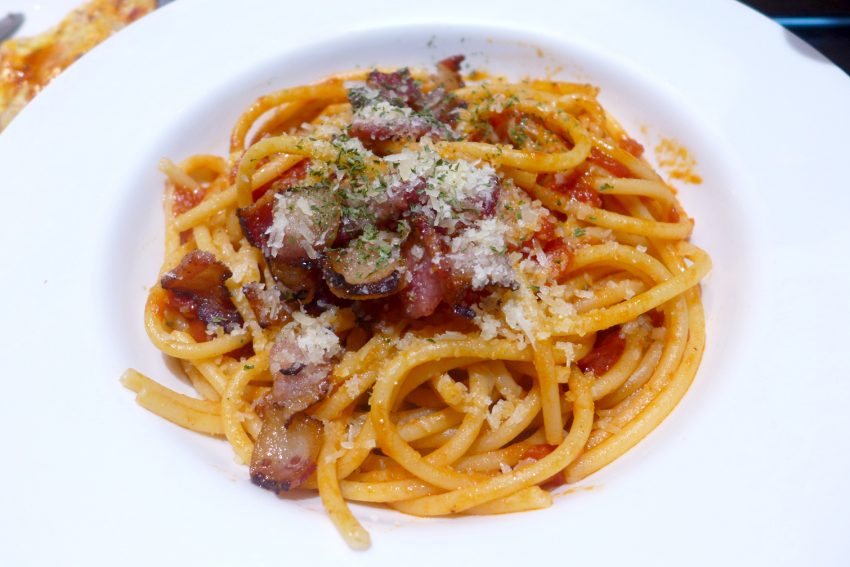 I was able to visit the Mama Lou’s branch at Vertis North twice over the past two months, a far cry from my last meal which was many years ago at their UP Town Center branch. Although it’s been quite some time since branches opened up here in the north, this restaurant seemed to still hold its fair share of patrons. Despite showing up mid-afternoon, the place was full, and we were a long way to go on the waiting list. We were ninth on the queue and spent some time roaming around the mall before we finally received a call that a table was ready for us.

I was hesitant about ordering Mama’s chicken, served alongside some fries, but Mr. B convinced me that those were some of the best-sellers. The chicken pieces were very big, but more than their generous size, I was pleasantly surprised with the flavors and textures. Apart from being well-seasoned, the chicken was very juicy while retaining a crisp coating. The fries were perfectly done too, and these ones, at least to me, were the fries version of Shakey’s mojos.

Our quattro formaggi pizza was also delicious. The blue cheese on the pizza was prominent but not overpowering. What I didn’t like though was its cracker-style crust, a completely personal bias.

Their bucatini amatriciana was also wonderful, with the pasta having been covered with a very well-balanced tomato sauce. Despite being tagged as spicy, it had very little kick. I only wished that there were more lardons to ensure that every forkful had a meaty crunch.

Mama tea for me was the let-down. I had a bit of a problem with the mint, which tasted off to me. I certainly didn’t enjoy it at all. On the contrary, the Mango Mama tea was such a hit for me on our next visit. Although I couldn’t exactly taste the mango in it, it was mostly what I expected the mama tea would be: sweet, flavorful and refreshing.

It took us quite a while to get seated this time around, as holiday get-togethers truly ramped up the dining scene. By the time we were seated and ready to order, we were informed that the fried chicken was not available. It was my favorite dish on our previous visit, and I was already feeling disappointed. At the last minute, our server came and let us know that the fried chicken was back on the menu, and so we were able to indulge in it for another time.

The chicken’s texture remained superb: a juicy interior with a crisp exterior. My only gripe was that the chicken wasn’t as well-seasoned as it could’ve been. The flavors didn’t exactly permeate into the chicken meat, unfortunately. The fries were still great, though.

The truffle mac & cheese was a creamy delight. The truffle flavor was notable without being too intense. The pasta still had great texture, and the noodles were definitely not overcooked. It was also a great side to the chicken, as it complemented the chicken’s crispy coating.

The Mamamia pizza was the least impressive on this round. The pepperoni slices weren’t enough to bring an abundance of flavor to the pie, even with the help of mushrooms, olives and bell pepper. I much prefer the simpler four-cheese pizza. Again, I didn’t enjoy the cracker-style crust.

One thing I truly appreciate at Mama Lou’s was the ambiance. It feels homey, and even if most times it’s busy, there’s no feeling of being rushed by the servers. They’re always polite yet welcoming.

I hope I could try more of their Italian offerings in the future. In the mean time, happy eating!