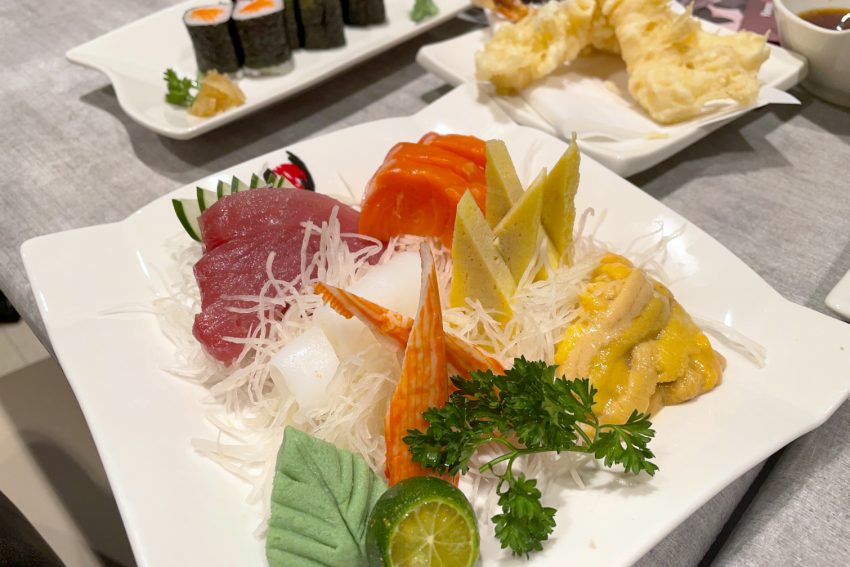 This casual restaurant was just a week from reopening when we had the opportunity to dine here. The interior looked very fresh and clean, with its muted tones and minimal decor. It was a weekday then, yet the restaurant had its fair share of patrons. On this occasion, we opted to try their sashimi, sushi rolls and tempura, even though their Japanese food offerings varied greatly.

The first to grace our table was the cowboy roll, the restaurant’s rendition on a beef sushi roll. The rice was alright, but it dominated the beef as the proportion was clearly off. The pieces of beef were too scant and it was difficult to taste the meat properly.

Next to arrive at our table was the sashimi moriawase, a platter of mostly raw seafood. I was quite confident that most of the seafood would be fresh as the branch had just reopened, and thankfully I was proven right. I started off with the uni, or sea urchin, which I only tried once before in the province many years back. What I had then was very fresh and so I was a bit hesitant on this second attempt. Luckily, their uni was very good. The flavors of the sea exploded in my mouth, and it was so much less slimy than oysters to me. There was also a creamy component I never tasted before. I certainly loved it.

The squid, to my surprise, was also very tender. I was expecting it to be tougher, but I was served some really good ones. The egg was sweet, as expected from a tamagoyaki, but after having had bites of delicious seafood, it threw me off. It was truly my least favorite among those on the platter. The salmon was also very flavorful, but it was a bit softer than I anticipated. The tuna was also very fresh, although frankly tuna isn’t my favorite fish for sashimi. All in all, this sashimi platter was our favorite dish, and as long as the quality remains the same, it would be a reasonable solution to some sashimi craving.

The ebi tempura was underwhelming. I appreciated that the batter was thin, however the prawns were dried out. I would skip this next time.

The salmon roll was very good value for money. Unlike the earlier beef roll, the salmon pieces were large enough to stand up to the rice. As a salmon lover, I enjoyed the simplicity of these rolls.

Finally, we tried the kimono roll. It was somewhat a hybrid of different rolls with its ebi tempura, spicy tuna, mango and cucumber. The spicy tuna was some minced raw tuna that was in dressing, and I honestly enjoyed that. Each slice was a big bite though, almost like a futomaki.

Despite enjoying the food and the ambiance, the biggest let-down was the service. Our server was less than enthusiastic in catering to us. She didn’t offer us house tea or miso soup, and we had to request for some tea instead. The bill-out process took a long time too. It was certainly disappointing considering the restaurant had just reopened. I could only wish that this was just a hiccup, and better service is in store for the future.