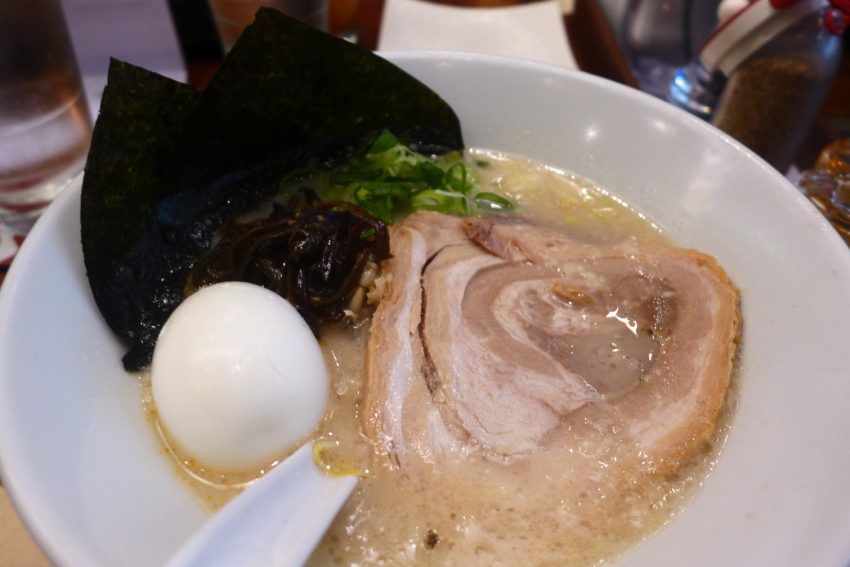 We arrived at Ippudo shortly after noon and the queue wasn’t too long. While waiting, the receptionist checked our vaccination cards, a step not many of restaurants these days do but was very much appreciated on my part. A few minutes later, we were led to our seats.

Our table was incredibly tiny that it took me back to Japan, where space was limited and everything was so close to one another. The table next to us wasn’t even two feet away, and it was occupied shortly after we were seated. We could overhear their conversation, and I was pretty sure that they could hear ours too. Somehow, I even wished we were seated at the counter, where we could watch the bowls of ramen being made from the window, instead of having feeling too squeezed in at our table. We tried requesting to move the table a little towards the spacious aisle, but it was to no avail. We had to make do with the uncomfortable setup.

By the time we were about to order, the server assigned to us was busy taking the next table’s order, where a friendlier and, frankly, more competent waitstaff graced our table. Two bowls of shiromaru special were what we picked. Our new server recommended that we choose very hard for our noodles’ firmness, something I would never have considered; I would typically gear towards medium, as it would be the middle ground. He went on to explain that choosing very hard would give room for some carryover cooking, which, admittedly, never crossed my mind before.

Our bowl of noodles arrived very quickly, perhaps since the noodles were not cooked for too long. On my first spoonful, I was beaming. The broth was so pleasant and very flavorful, a better version of the broth made by my mother when she slow cooks pork. There was a deep meaty flavor, without acquiring that nasty taste that pork sometimes have. It was rich and had a gelatinous texture that really reminded one of cooking low and slow. I opted not to add garlic to my bowl, and after trying Mr. B’s bowl with a clove pressed in, I still preferred the one without. Thanks to our server’s advice, there was no soggy noodles for us to consume at the end of our meal. In this case, very firm was indeed the better choice.

As our side orders of a pork bun and some deep-fried gyoza arrived, our table felt too cramped with the dishes. Nevertheless, I enjoyed the pork in the pork bun — it was very tasty and tender. The typical Japanese flavors of soy and sweetness permeated through the meat. On the other hand, I had mixed feelings towards the bun — I wasn’t sure if it was under-proofed or just very soft. Either way, it was overall very good, and had my ramen portion been a bit smaller, I would have loved to have more of this dish.

The deep-fried gyoza was quite the let-down. Among the things we tried, this was my least favorite. The filling didn’t feel meaty nor tasty enough. The level of spice was perfect though; it was interesting enough to keep you going for more without feeling too much of the burning feeling. I also enjoyed the crispiness, which lasted throughout the meal.

Despite overloading our meal with pork, the food was remarkably good and I enjoyed most bites I had. The only thing I had qualms about was the tiny table which was very close to the next one. This made the entire dining experience so much less comfortable. If you’re looking for a social experience, this just isn’t the place. Like most ramen joints in Japan, you dine and dash here.