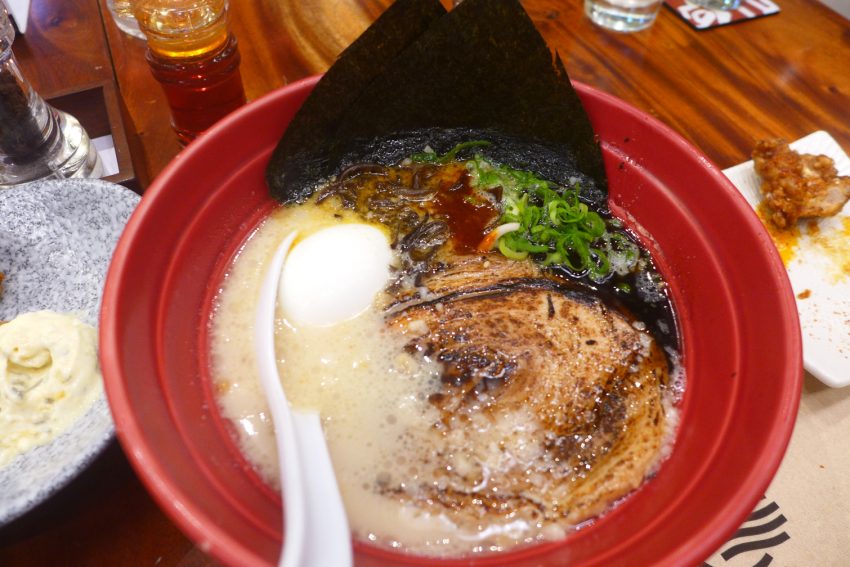 That weekend, I was building up a craving for Mexican food. It was one of the rare times I was visiting Greenhills and I wanted to eat at Tittos Latin BBQ and Brew. However, having had a lot to wine and dine the previous night, a very greasy and fatty meal from a Mexican joint wasn’t exactly what would appease my tummy. It wasn’t until I saw a ramen shop nearby that my Latin craving shifted to a Japanese one. I mulled my food options over coffee from the nearby Wildflour Cafe, and later decided to go with the ramen, only to have them later from Ippudo in Vertis North.

It was a long drive from Greenhills back to Quezon City, especially as the signal storm was raised to level 3 in Metro Manila. As we pulled into Vertis North, the rather empty parking garage made it evident that people either opted to stay home or went home early. Many stores chose to close early citing the rain for the premature shutdown, but we were lucky to find Ippudo still open…and there was no queue at all! The place was as empty as I had ever seen it, yet the staff were warm and welcoming as ever.

We ordered some karaage as our side dish, which was served right away. The pieces of chicken were crisp yet juicy, and the sweet soy-based sauce topping lended a teriyaki flavor. It was good, but it still didn’t beat my favorite karaage from a different chain.

Since there weren’t many patrons that afternoon, our bowls of noodles soon graced our table. However, I then realized that my hair was down and I would have a very difficult time enjoying my bowl. I asked our server whether they had a rubber band or so, and not only was I provided with two, but I was also offered a hair net when the waiter learned that it was for my hair. I declined the offer, but I was extremely appreciative of the gesture as it showed the staff’s dedication to a customer’s comfort while dining.

As I ordered shiromaru last time, it was time to try their akamaru. I thoroughly enjoyed that classic shiromaru broth, and I was secretly hoping that I’d love the akamaru more. The only difference in the components of the two bowls was the presence of spicy miso paste and some garlic oil. To me, these two were both flavor bombs, so I was expecting that they elevated the flavors of the dish. I was wrong.

It was not that the bowl of ramen wasn’t good, it still was, but the rich pork flavor of the broth was somehow drowned by the addition of these two condiments. Don’t get me wrong, I liked the burst of spice brought on by the miso paste as it made things interesting, but for a bowl of porky goodness, I would much rather be a purist and leave it as plain as possible, savoring the each spoonful of that 15-hour pork broth without any distractions. All the toppings remained very good and made the bowl of ramen texturally fascinating, but if I were being a bit nit-picky, I would be happier with a touch harder egg, as mine was on the softer side.

One of my guilty pleasures when dining out is watching the staff members interact with each other, and on that day, there was a certain buzz. I overheard one of them saying that they’d be allowed to go home early because of the looming typhoon, which our server later confirmed to be at 5pm. I was surprised and appreciative of this restaurant’s management policies, but I was even more astounded with what our waiter followed it with. He said, “sobrang bait po ng management ng Ippudo”. It was an unsolicited remark, but it certainly showed me how happy the workers here were. As a diner, it made me feel good to be supporting a brand that puts workers’ welfare as its priority.

I would definitely be back. More on QC food next time. Happy eating!