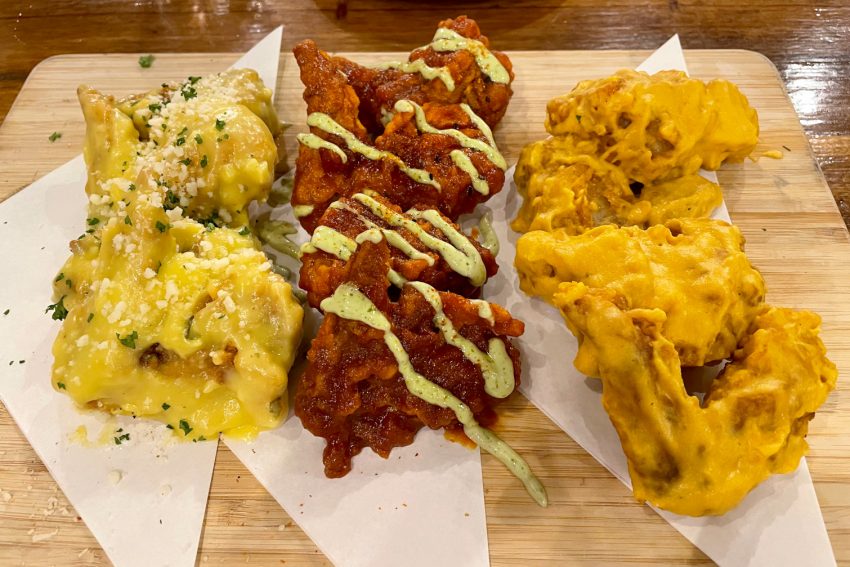 I had some difficulty persuading Mr. B to ditch our favorite dessert shop and opt instead for High Grounds Cafe. In all honesty, this rather spacious coffee shop intrigued me. The patio looked so relaxing, and it was never without patrons. The wide parking space across the street was a bonus too.

However, it was an interaction with a parking attendant that prompted us to leave before we could even begin our dining experience. He wanted the vehicle to be parked very very close to the next one, without considering the difficulty of getting off or into the car. It also didn’t help that the ground was muddy, so a little leeway would have been nice, especially since the parking area was less than half-full.

It wasn’t until I spent a night out with my friends that I got the opportunity to come back; this time without our own ride. I was truly surprised to find such a huge space inside, as I initially expected a quaint coffee shop. In fact, it felt like three separate spaces — a coffee shop in front, a sectioned off area for gamers, and another portion for dining patrons. As the front area was occupied and we were in need of a filling meal, we headed towards the proper dining space. It had a high ceiling and was indeed very spacious, but it missed the ambiance that a cafe usually had.

Our order was comprised of chicken wings, two pizzas and a pasta. Each one of us tried a drink, but the current pandemic made me queasy enough to taste my friends’ drinks. I opted for the iced hazelnut brittle latte (P180), which I had high hopes for, but I was left sorely disappointed. It didn’t have the subtle yet sumptuous flavor of hazelnut; rather it tasted like the coffee which was heavily spiked with artificial hazelnut flavoring. It was not something I enjoyed, hence, I would probably not be ordering it again.

During the placement of our order, our server informed us that the Korean style chicken wings were not available, so our platter of 12 (P520) would only be comprised of three flavors: Buffalo, salted egg and garlic parmesan. Strangely, I was in no mood to try all the flavors, and so I only opted for the Buffalo style. The coating was no longer crisp, yet I developed a love-hate relationship with the sauce. I did not understand whether it was too spicy or not, but it kept me hooked, so I would like to believe that it hit just the right level of spice.

The four mushroom pizza (P350) came with a black crust. I was unable to identify all the types of mushrooms it showcased as it was sporadically dispersed. These mushrooms were no match in flavor compared to the bonito flakes that topped the pizza. It was an, um, interesting flavor profile, but it honestly left me confused. I was, however, pleased with the stringiness of the cheese that they used on this pizza — it felt like a real pizza!

Despite being traditional, the all-meat pizza (P400) had a bit more edge in flavor for me. The Italian and Hungarian sausages might have looked scorched, but they added such meatiness to this carnivorous pie. The bacon bits and the pepperoni contributed to more savoriness, and it was difficult not enjoy this pizza. The only let-down was the cheese. It did not have the same stringy cheese as the one in the four-mushroom pizza, which would have brought this pie to another level. However, it was still good enough.

Having just had carbonara (P280) the previous night, I opted not to dig in on this dish. The whole meal had been fatty and indulgent enough that I dared not to go overboard. The carbonara looked very promising though with an egg yolk sitting atop the pasta, which made it more traditional, yet the chopped parsley contradicted such attempt for authenticity.

Overall, I felt that we had tasty dishes for reasonable prices. Even with my discouraging first coffee-based drink, I still would like to taste more of their beverages in the future. Until next time, happy eating!