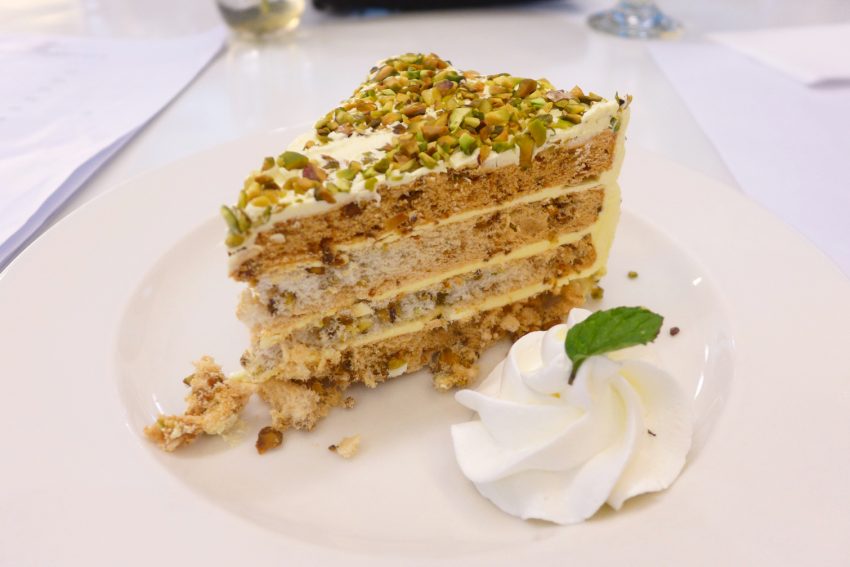 It took me several visits throughout this year to finally get to taste most of Heny’s cakes. Her dessert shop is housed in Victorino’s restaurant, a converted space with an old world charm. I loved the clay floor tiles and the dark wooden furniture against the white walls and its ambiance was perfect for relaxed dining. Our earlier experiences were amazing as customers were far and few in between, but service slightly suffered as more patrons poured in after COVID restrictions eased. In any case, we loved discovering the flavors and textures of every cake we ever tried.

Their lemon torte was magnificent the first time I tried it. Cashews and walnuts were folded in the meringue. The curd and whipped cream oozed of lemon flavors; it was a good contrast to the otherwise decadent dacquoise cake. However, I was a bit disappointed the next time I tried a slice of this dessert; it just didn’t have the same wow-factor like the first time.

The mango chocolate torte was another meringue-based dessert. The mangoes were frozen, and I wasn’t sure if that was a good thing or not. The cream was too much, but the chocolate was just the perfect amount. The mango mousse left me confused as to what it was, and I initially thought it was a cheesecake layer. This layered cake was certainly not my favorite, and I honestly preferred a similar version from another famous bakeshop.

It was my first time trying a burnt basque cheesecake. It was a creamy cheesecake, but it felt denser that what I preferred. Whether that was a characteristic of a burnt basque cake or not, I honestly did not know. I also didn’t like the cream cheese they used, as only a specific brand rendered such a lovely flavor profile of cheesecake for me, and this cheesecake did not have it.

The red velvet cake was love, love, love. The crumb was very fine and the frosting was very creamy. The chocolate flavor was very subtle, which I expected it to be. Overall, this cake was very delicious. In fact, it was so good that it was the cake my father recalled from this restaurant many years back.

It was strawberry shortcake that I ordered after one meal when I had too much too eat. The cake was very fluffy and light, and was very good in general. The strawberries provided some tartness that I was looking for after such a fatty meal, although some people might prefer and look for the sweetness that the fruit brings. I appreciated the quality of the strawberries though, as they were large and very pretty to look at. Certainly, they were some of the finest one can have. The only thing I disliked about this cake was the abundance of cream. I would’ve preferred less cream frosting, but it was easy to remove some from my forkfuls.

The ube macapuno cake was nothing to write home about. I admit that I may be biased here as ube is not my favorite flavor. The cake crumb was good, however this cake didn’t convert me to an ube lover either.

The blueberry cheesecake was very light in contrast to the burnt basque cake , and I would have loved a texture that’s in between this and the burnt basque cake. This dessert also didn’t offer a graham cracker crust, and used a pate sablee instead. The cream cheese used again wasn’t my preferred brand, and I was a little disappointed with the overall flavor. It was also a bit tarter than I anticipated, perhaps brought on by some sour cream.

The chocolate cake was indeed very decadent. I loved the coffee filling and the ganache that covered the cake. The layers were also very moist and lovely to eat, and I say this despite not being the biggest fan of chocolate cakes.

It was also in Heny’s that I first tried tres leches cake. It had a very strange texture given that it’s soaked in milk. It had a slightly bitter after-taste which I couldn’t pinpoint, and I honestly didn’t like it at first. The flavor, however, grew on me and I appreciated it towards the end.

Their pistachio sans rival had some very good wafers. The layers also had a great balance between the buttercream and the meringue layers. It wasn’t too buttery except for the edges, which I honestly appreciated. Pistachio was also a great twist on the classic cashew.

Overall, I loved their strawberry shortcake the best. Their red velvet would be my runner-up, but it would be closely followed by their lemon torte. If you’re a chocolate lover, their chocolate cake was wonderful too. If you’re feeling decadent, the sans rival would be perfect.

These cake slices are generally too big as a dessert for one person, and oftentimes we couldn’t finish both of our slices. I also get slightly annoyed with the way they serve the utensils along with the cakes. The fork and the knife were usually placed on the plate as it gets served, and more often than not, the handles of the utensils get smudged with frosting. I just couldn’t understand why they couldn’t place the utensils on a napkin on the table separately.

Bill-out is often very slow, and if you order drinks, those would be billed separately as it would fall under Victorino’s. I later learned just to make do with drinking water. Their decaf coffee was too bitter for my liking, while their iced tea was good, although a bit sweet.

Service was a mix of great and sloppy, but most of the time we had the better end of the spectrum. The staff were generally warm and welcoming, and it was easy to call the attention of a server most of the time. There was one time though when the restaurant was so busy that service was extra slow. One thing I truly disliked was that the staff mopped the floors while we were dining, something that happened to us twice. The scent of bleach reeked onto the air while we were indulging in our cakes, and it wasn’t exactly pleasant.

Regardless, for cakes, Heny’s desserterie remains as our favorite place. I know we’ll be back for more.