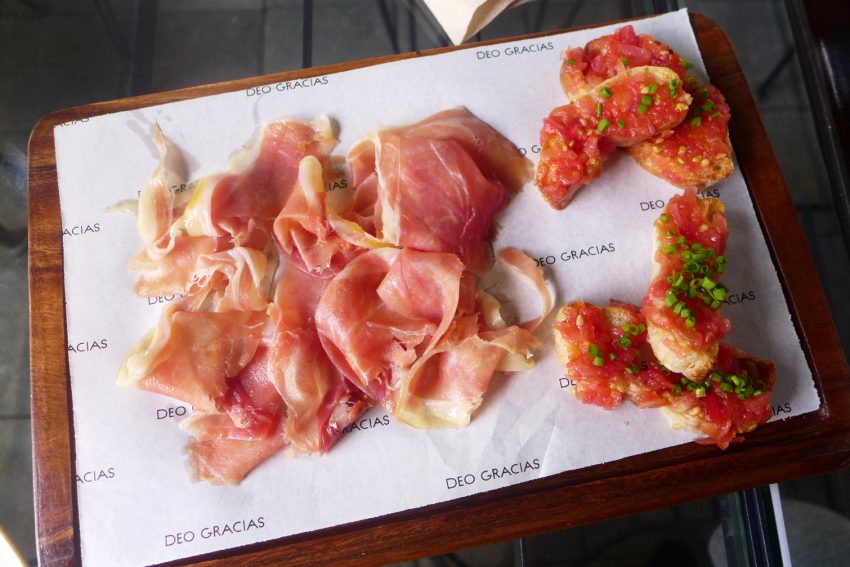 We headed to Deogracias without a reservation, hoping that a table was available. The guard who let us park was hesitant at first to let us in, but he told us to simply ask by the door. The maitre d’ informed us that lunch reservations were full, even for their second seating, but the garden area was open. Sure enough, we opted to dine al fresco no matter how hot it was that day. The garden was empty, save for us, so our dining experience was as serene as it could ever be. However, service in this area was poor, as often no server was around. The more annoying part though was that some patrons used this area as their smoking lounge while we were eating, which was certainly unpleasant for non-smokers like us.

The first to arrive were our two glasses of red wine sangria (P380/glass). The servings were quite generous, however, this drink wasn’t one that I thoroughly enjoyed. I felt that the sangria was a bit watered down, a far cry from what I imagined a perfect sangria would be: fruity and refreshing but a bit boozy. It was a disappointment, but I hoped that it wouldn’t be the beginning of a less-than-ideal meal.

Soon enough, our first appetizer arrived: some jamon serrano with pan con tomate (P550). I honestly disliked how awkward the slices of the ham were — they were thin enough but were quite large. I topped the ham slices on the bread, but I didn’t know how to eat them without fuss. Regardless, the ham was flavorful. Of course, I’m ignorant in the world of ham and couldn’t differentiate one from the other, so I couldn’t describe the flavors in much detail. However, I would say that the slicing was done somehow improperly, as some of the cuts were too lean while others were too fatty. The tomatoes were definitely a tangy relief from the fatty ham slices.

The croquetas de jamon iberico (P395) were next to grace our table. The jamon iberico was too finely chopped to even lend flavor to these fried goodies, but the filling itself was more than delicious. These croquetas were so creamy that it felt like mornay sauce was breaded and fried: I truly loved it.

The puntillas fritas (P570) was also surprisingly good. The coating was crisp, yet the pieces of baby squid were tender; they were definitely cooked on point. The surrounding dots of parsley and squid ink aioli tasted the same to me despite having different colors. A slight squeeze of lemon brightened this otherwise fatty dish. This was truly a magnificent dish for me too.

The arroz del senyoret (P890) took a long time to be served. While we know it would take quite some time to make the dish, it was the first order we placed, and requested our server to notify the kitchen while we were still deciding on the rest of our dishes to order. We had already finished all our tapas but by then the paella was still nowhere in sight, and I was a bit surprised that it was taking such a long time. Anyway, it arrived, and my first impression was that the rice was very scant. The layer of rice sitting at the bottom of the pan was very thin, and seeing that was very disappointing to me. However, what it lacked in quantity, it made up for its quality. The rice had such good flavors of what I presumed were tomatoes, paprika and a seafood stock, and it was such a delight eating it. The fish was cooked on point but the rest of the seafood were overcooked, including a rubbery squid and a dried out shrimp. Some lemon juice was needed to provide respite from that too-rich flavor, but the lemon wedges seemed improperly cut: they couldn’t be squeezed. Our server was accommodating to bring us more, thankfully.

By the time we almost finished the pan, we were exceedingly full, but our order of churros (P330) was yet to come. I was honestly anticipating this part highly, as I miss having some of these fried treats. Unfortunately, they were the biggest let-down of our entire meal. The exterior was too tough but even the interior didn’t have the pillowy texture I was looking for. The plain ones were covered in too much sugar, while the chocolate churros were covered in too thick a couverture. I honestly didn’t care for the dips anymore after the dismaying sweet experience.

To be honest, it was mostly the beginning and the end of our meal that I had some qualms about. The tapas were excellent, and I would go back for them in a heartbeat, if only they weren’t a bit pricey. It’s certainly not an everyday meal for someone like me, but it was some truly good food. Next time, I’ll get a reservation so I could soak in those beautiful interiors too!

Until the next food adventure, happy eating!