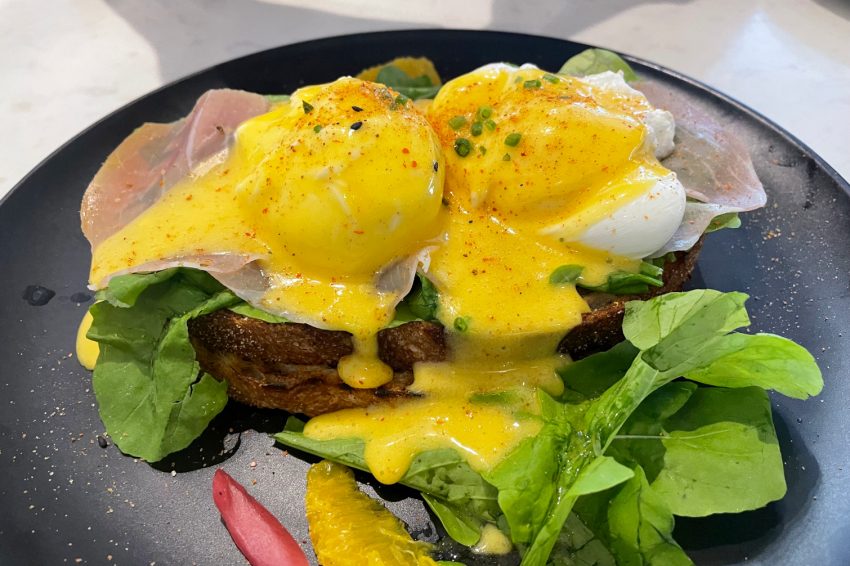 Of all the places we had breakfasts in, it would be Dean & Deluca that would take the cake. I loved its modern minimalist interior, with the view of either the kitchen or the bar. Early on Saturday mornings, this was a place of calm, although admittedly sometimes the quality of service would put me on edge. I loved their food nevertheless, especially their viennoiseries.

Let me begin by saying that their croissants were some of the better ones I ever had in the country. The croissants were a mixed bag in terms of the crisp exterior that I preferred but they always had the tender, flaky and buttery interior that I always looked for. One thing that irked me was that the croissant was cut in half, as though it was meant for a sandwich — this is the only place that served croissants like that. One time, I even asked the staff about this, and they told me that the croissants arrive from the commissary already cut. The almond version was very messy to eat, while the ham and cheese variation was very much on point.

Their pain au chocolat was very crisp yet tender; it was everything I imagined my croissant to be. It had a very generous chocolate filling without being too sweet, and if there was such a thing, there was too much chocolate! On one occasion, the pain au chocolat wasn’t as stellar as it usually was, and I was of the assumption that that piece was from an old batch.

It was, however, the danishes that would take my heart. Oh, those flaky yet tender pastries were a wonder of their own. Of the three kinds of viennoiseries, these were the most tender, with a very luscious pastry cream to go along with it. The strawberry variant was the first we tried, but I was more impressed with the blueberry one, as it had whole berries in the jam atop the pastry.

I certainly loved Dean & Deluca’s viennoiseries, but sometimes I get disappointed when their pastry stand wasn’t full early in the morning. The pastry case wouldn’t look as appetizing as it could have been. However, I appreciated the staff’s honesty when asked whether the pastries were fresh, as they were upfront that the pieces on display were from the afternoon of the previous day.

I also didn’t like that on one occasion, when we had three pastries on order, and they did not heat them at the same time. Two were left sitting on the counter as those waited for the last one getting heated, which meant some items were not as warm as I hoped they would be by the time they reached our table. I also wished that they served these sweet pastries after or alongside our savory meals and not ahead of.

The Sonoma Ham Omelette was a mix of French and American styles. It was half-moon-shaped, but was only a teeny tiny bit brown. More mushrooms could be found near the edges, but the chunks of the salty Sonoma ham were too few in my opinion. Mr. B liked the sourdough toast which had a good crust and a great chew, but frankly I’m more Asian at heart and preferred some fluffy white bread. Some lettuce leaves drizzled with balsamic vinaigrette were served alongside the omelette.

The Eggs Benedict had some perfectly poached eggs. I loved the pickled onions that had a bit of a cuminy taste. The dish featured a slice of sourdough instead of an English muffin, which I didn’t appreciate much as the way it was ‘toasted’ was a bit too greasy for my liking. The prosciutto was too scant and it was lost in the trappings of the egg, the hollandaise, the sourdough and the arugula.

The Croque Madame was my favorite savory breakfast dish so far. The ham was plentiful, and it stood up to the creaminess of the bechamel and the cheese. Two eggs seemed too much for this ham and cheese sandwich, but I loved the runny yolk that also served as sauce. I also enjoyed the arugula salad, but I wished that the greens were tossed with the dressing, not simply drizzled with.

If there’s one part of breakfast that I was not looking forward to in this restaurant, it was coffee. I usually get a cappuccino for breakfast, but their version was too sour for my liking. I tried their Gibraltar, and still it was too sour for my taste. Next, I opted for a cortado, it was still sour! One time, Mr. B departed from his usual latte and ordered a mocha, and then I found the one. I loved their mocha, and ordered it on our following visit. Although some chocolate weren’t fully melted at the bottom of the glass, I could now say that it would be my morning drink of choice in this restaurant going forward.

Usually, these hot drinks took such a long time to arrive, whether there were more orders ahead of us, I don’t really know. Often, early in the morning, there were only a few tables occupied, so I often feel that it was too much wait for a cup of coffee. However, I often enjoyed the latte art that came along with these cups. They were truly pretty.

Service in Dean & Deluca was a bit of a mixed bag. It certainly wasn’t bad but it’s not the best, except for one time when we were lucky to have someone who seemed very interested in the comfort of the diners. He served us water without having to ask, and he adjusted the air-con vents so it wouldn’t hit us directly. Most of the time, the staff were less enthusiastic, perhaps because it was still too early in the morning.

I enjoyed the bar seating the most, as I could see the staff make coffee and prepare our food, although this isn’t advisable if you’re having a bigger meal. The next best alternative would be the long table opposite the bar. I honestly disliked the regular tables near the kitchen as the table seemed too high for the chair, making dining difficult or awkward, especially for a short person like me.

On our last visit, there was a power outage as we were waiting for our bill, but the generator was quick to kick in. Unfortunately, the restaurant was on the news two days later for having had a fire incident. It’s certainly bad news but it’s a blessing that no one got hurt. I only wish that they could recover quickly.

More on eats around Quezon City next time. Happy eating!