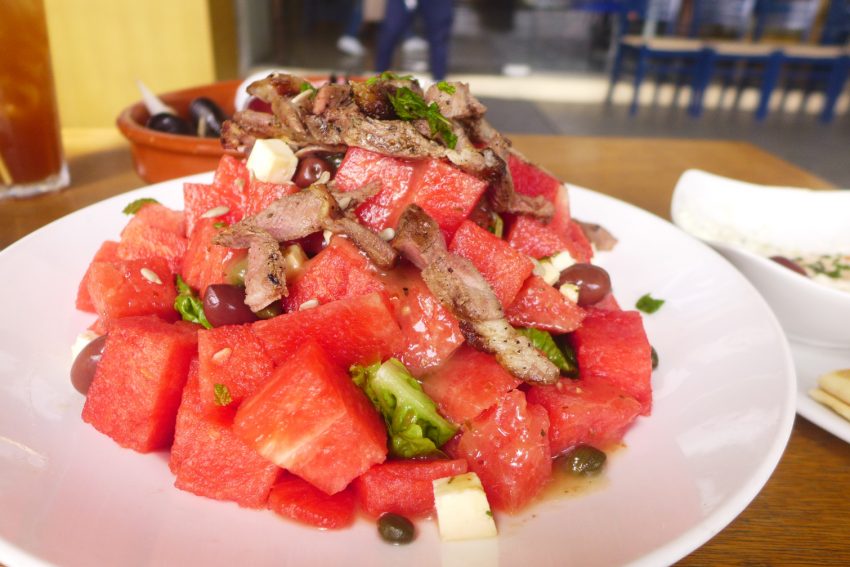 Contrary to our previous dining experience, Cyma had suddenly returned to its usual brisk business. It was already way past the usual lunch rush hours but the restaurant was still full. We left not wanting to wait, only to go back as the allure of a great Greek meal was too much to pass up.

The manager led us to our table after it had been cleared. We went over the menu, and during that short time, I was eager to transfer tables–the table beside us was simply too annoying to spend an entire meal with. It was a big group with two kids: one was playing and tossing stuff all over the place while the other was busy playing with a tablet with the sound blaring. Don’t get me wrong, the kids weren’t to blame — it was the adults who didn’t have the decency to discipline their kids that I was disappointed with. We ended up dining al fresco, which wasn’t my preferred style, but it was miles better than having to endure that rowdy table.

Having asked for a table transfer from the manager, it was only then that I realized that the manager was actually one of two regular servers who used to wait on us many years back. On our previous visit, we asked about the other server and was informed that he had been transferred to Green Pastures, another restaurant owned by the chef. As a patron, it’s great to know that the staff here are promoted from within, as it feels as though they are truly valued.

Rant and observation aside, we ordered four dishes for our meal: tzatziki served with pita, lamb and watermelon salad, mavros yiouvetsi and beef souvlaki. The tzatziki was thick and creamy, and it was overall very good, although I wished it was a tiny bit more garlicky. I was honestly surprised to find a sprinkling of sumac on the tzatziki. I loved the warm pita, however, it did not have a pocket that a typical pita had.

The lamb and watermelon salad came a bit later. In fact, it arrived too late such that it was served along with our mains. This was the dish we didn’t exactly consider ordering until we overheard other patrons from our previous visit ordering this dish. My expectations were then very high for this dish.

The salad was too watery; perhaps it was due to the watermelon sitting on the plate for far longer than necessary. The watermelon pieces were too chunky for a bite, but thankfully, they were seedless. The lamb with lettuce was great when eaten together, although the dressing felt too diluted. The sunflower seeds were easy to miss, and the texture that they were expected to provide got lost after being soaked in the dressing for far too long. The olives were left whole, and unexpectedly, had pits. The “feta” cheese didn’t taste like one, as I was missing the salty creamy texture of feta. It was only after digging for more watermelon at the bottom that I hit a jackpot: chunks of watermelon soaked in dressing. Those were truly a delight. Overall, this was a salad that was overhyped in my head, but those watermelon pieces soaked in dressing were truly marvelous.

The mavros yiouvetsi was something Mr. B wanted to indulge in. The orzo was a little past its al dente stage, but it was doused in more than enough squid ink sauce. Loads of seafood covered the dish, and the bright orange color of the prawns was striking against the dark hue of the pasta. Although the scallop might be technically cooked well, I preferred it cooked a little bit more. The mussels and the clams I tried were cooked perfectly; they were very succulent. Unfortunately, the mussels still had some beard left on. The dish was very savory. It was good, but it just felt too rich after too many bites.

The beef souvlaki, on the other hand, was seasoned perfectly, even after being doused in sauce. The meat was tender enough, but I would’ve preferred a rarer meat. I also loved the grilled vegetables, but some people might find them overdone. I found the garlic sauce too garlicky for me. (A mix of the tzatziki and this garlic sauce would have been my perfect garlic yogurt sauce.)

Overall, it was a very big, hearty meal that I thoroughly enjoyed. Sure, it was far from perfect, but Cyma had this exceptional ability to captivate your senses and awaken your taste buds. The service was superb as always. I couldn’t wait to go back.