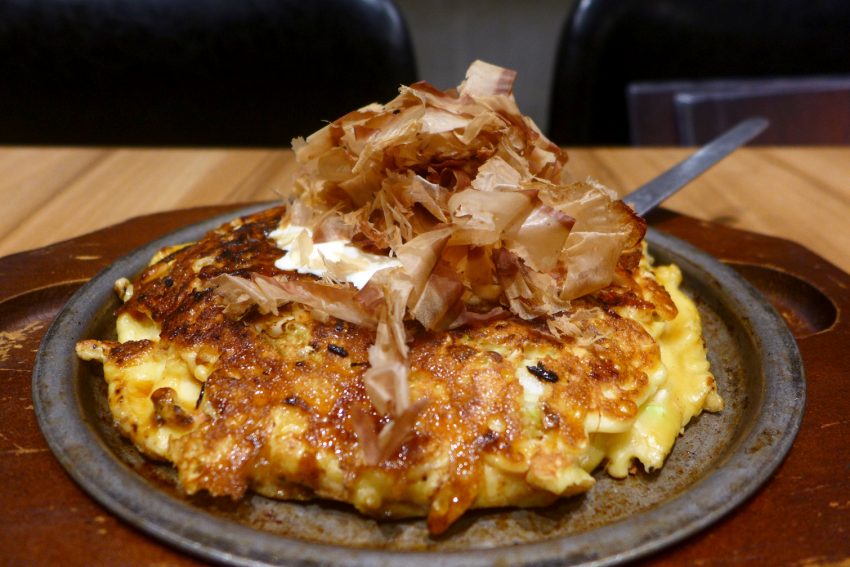 It wasn’t until we had a craving for Japanese cuisine that we first had the chance to visit Vertis North’s Japan Town. Here was an array of Japanese restaurants specializing in a certain dish, as was typically done in Japan. Botejyu seemed to be the exception.

Upon entry, our server quickly led us to our table. I appreciated that she asked whether we preferred sitting side by side rather than face to face, and promptly removed the unnecessary utensils. I was also delighted to see the bench with a hollowed out back portion, a perfect storage for bags for a fuss-free meal.

To be honest, I couldn’t help but get overwhelmed looking at their menu. It just had too many dishes — from sushi rolls to agemono, from ramen to teppanyaki. It took me quite a while to take my pick, but almost everything went smoothly thereafter.

We started off with the sukiyaki beef roll. I was pleasantly surprised to taste such wonderful sticky rice used. The sukiyaki tasted almost like the beef atop a gyudon, salty from the soy sauce with a hint of sweetness. The salmon sashimi had quite thick slices, but they were less firm than I expected.

The karaage looked very pale when it graced our table. However, it was on point when it came to its seasoning. It was crisp and juicy, and it may be my favorite karaage to date. The chicken pieces were very generous too.

The pork paitan had a flavorful broth, reminding me of tonkotsu. I later found out that tonkotsu is a type of paitan. I still preferred Ippudo’s broth, but for a restaurant not specializing in ramen, this was a good enough try.

The mochi and cheese okonomiyaki, which came with pork belly, took such a long time to be prepared. Early on, our server informed us that mochi was not available, and if it was alright with us, they were doubling the cheese instead. I gave a green light, but I regretted it later on. The cheese was too front and center that I couldn’t taste the okonomiyaki itself. I really didn’t enjoy it. The pork belly slices were also too chunky, and cutting them in pieces was really difficult. Among the dishes we tried, this was by far the let-down.

Towards the end of our meal, a fly was roaming around the restaurant, to which our server apologized for. Bill-out took unnecessarily longer than expected, but all in all, service was quite good.

My second attempt at Botejyu was at the North Towers of SM North EDSA. The place didn’t look as polished as that in Vertis North, but the servers were nonetheless very warm and welcoming.

This time around, it was more sushi rolls and agemono. I still enjoyed the sukiyaki beef rolls and they appeared consistent with those I tried in Vertis North. The karaage was still fantastic.

Our other dishes were a bit of a mixed bag. We were informed earlier that avocado was unavailable for the Seattle roll, but they were willing to swap it out with mango. Again, I gave a green light but I regretted it. The mango overwhelmed the subtle flavors of salmon and cream cheese. It was still good, but it tasted more like a California maki.

The pressed salmon sushi was sub-par. There was just too much rice that you couldn’t taste much of the fish anymore.

The tempura was alright, it being not the best but not bad either. It was also a bit more greasy, judging by the drops of oil on the tempura paper.

The branch at Trinoma was the dingiest of the three I’ve been in. The tiny, odd-shaped space was not as well-maintained as the other branches. The staff were also the least friendly among the three.

Karaage and tempura were among our repeats. This branch’s version of the fried chicken was less than stellar. It didn’t have the juiciness that the other branches had, but I also had a piece than was a bit undercooked. The ebi tempura was surprisingly smaller compared to the North Towers’.

For sushi rolls, we chose the crispy fried prawn tempura mayo roll. It was one of the better sushi rolls given the contrasting textures of the tempura against the sticky sushi rice. The California maki was also quite good — the less-than-sweet mango was a great accompaniment to the sweet crabstick, while the crunch of the cucumber and popping fish roe contributed a lot of texture. Again, I loved Botejyu’s sticky rice, and that sushi rice makes most of their sushi rolls quite enjoyable.

Finally, we re-ordered the belly, mochi and cheese okonomiyaki. As before, the dish took a long time to be served, yet this version was so much better than my previous experience. The mochi held back the strong flavor of cheese, while the pork belly slices rendered a delicious umami taste. I also liked that we could add as much bonito flakes as we wanted since a container of katsuobushi was available on the table, although I would have appreciated more okonomiyaki sauce atop this teppanyaki dish. Again, I wished that the pork belly slices were cut a bit smaller as slicing them with the given tool was quite a task. It wasn’t as good-tasting as my last okonomiyaki in Japan, but it certainly could satisfy my craving once it strikes again.

To summarize, I would skip the branch in Trinoma and would opt instead to dine at either Vertis North or SM North EDSA. I loved the karaage tremendously, and I would be hard-pressed in giving it a miss every time I visit. I enjoyed the sukiyaki beef roll and the tempura roll among the sushi rolls the most. I also liked the okonomiyaki with pork belly, mochi and cheese, especially with an additional dose of katsuobushi. I would be wary of any recommended replacements though, as my two experiences didn’t exactly live to expectations.

The menu could be daunting at first, but combing through the choices and comparing it with what I wanted to eat allowed me to enjoy meals at Botejyu. If you’re craving for a Japanese meal without regard for a particular dish, this might be a good bet.