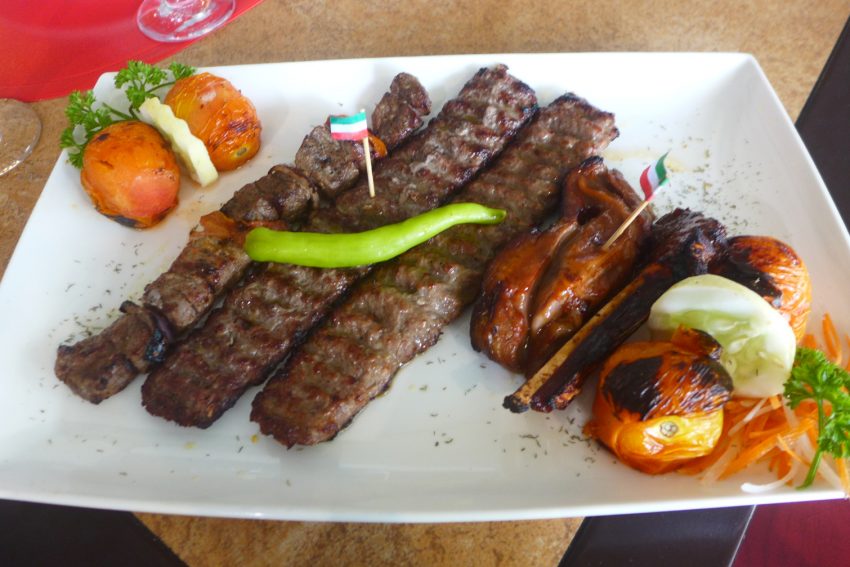 It was a rare errand that prompted us to head to Robinsons Magnolia one Saturday afternoon. As I scoured for places to eat, one stood out: Arya Persian Restaurant. Mr. B had previously raved of their food after his visits to their branch at Shangri-la Plaza. It was Robinsons Magnolia, however, that housed the branch of this Middle Eastern restaurant that is closest to home, and it was time for me to finally try it.

The restaurant was empty except for one occupied table. As soon as we entered, we realized why. The cooling system was broken and it was a bit of torture to dine inside. Luckily, outdoor dining was available. Our order consisted of tzatziki and pita, some meats and rice, and two yogurt drinks.

The tzatziki (P268) and pita (P139 for 3pcs) graced our table first as expected. I loved the pita; it was flaky yet very soft and was toasted enough. It was good, and it might have been the best pita I’ve had lately. I also appreciated that the basket they were served in was lined in cloth, allowing the pita to stay warm. The tzatziki, however, was a bit too sour for my liking. I also wished it was salted some more, and I would have preferred it without the dill, a totally personal bias. Mr. B had no qualms with it though, and gladly enjoyed the dip.

The drinks came right after. I chose an Arya yogurt smoothie (P195), which supposedly contained rose water making it a notch above the plain yogurt smoothie. It was creamy and had the right level of tartness which I truly enjoyed. Unfortunately for me, I couldn’t taste nor smell the rose water. Perhaps my palate isn’t trained to the nuances of its flavor, that it seemed that I missed it entirely. Mr. B’s yogurt strawberry smoothie (P195), on the other hand, was almost a dessert. It was full of strawberry goodness, yet it was devoid of the tart flavor that the yogurt brings. It would be a great ending to the meal, but I preferred the simple yogurt smoothie as a drink during the meal.

The platter of red meat or Arya Sini Ghermez (P1184) was quite underwhelming as it was placed on our table. The rice was served on a different plate, and the platter felt too huge for the quantities of meat on it without the rice. I typically associate Middle Eastern meals with generosity and abundance, and seeing that rather sparse platter was an exception to that. In any case, that impression didn’t deter me from enjoying the meal. Four different meat dishes were included in the platter: beef koobideh, lamb koobideh, beef shish and shishlik (lamb chops). The lamb cuts were identified with flags, while the beef didn’t have any markers.

The lamb chops were outstanding. They had enough gamey-ness that I enjoyed, and the Arya sauce that covered them had a sweetness that complemented the lamb chops very well. The beef shish kebab, however, was the winner for me. The beef cubes were perfectly cooked: very tender but flavorful. The koobideh skewers were a bit flatter in flavor for me, as I was unable to taste any spice, condiment or aromatic except for onions. I preferred the beef over the lamb in the koobideh form, an unusual case for me, as I couldn’t taste any gamey-ness (which in right quantities I enjoyed) in the lamb variant. I also enjoyed the grilled tomatoes and onions that came along with the meat platter, especially those cut-up tomatoes skewered between the beef cubes in the shish kebab. I didn’t know tomatoes could have such concentrated flavor when grilled this way. I didn’t care too much for the rice, as I don’t usually enjoy basmati rice (another personal bias). The buttered grains were tossed with the plain ones, and the mound of rice didn’t have an additional pat of butter on top.

Despite the platter looking less crowded than expected, we were extremely full by the time we finished everything. The bill-out process took quite a while, but we were able to people-watch and stare at the Central Garden a floor below us while waiting. It had been a great meal, although I must admit it was a little pricey. I’d stick to the beef shish kebabs next time, while I’d love to explore the dips that would go along with their wonderful pita on my subsequent visit.

Until the next food hunt, happy eating!