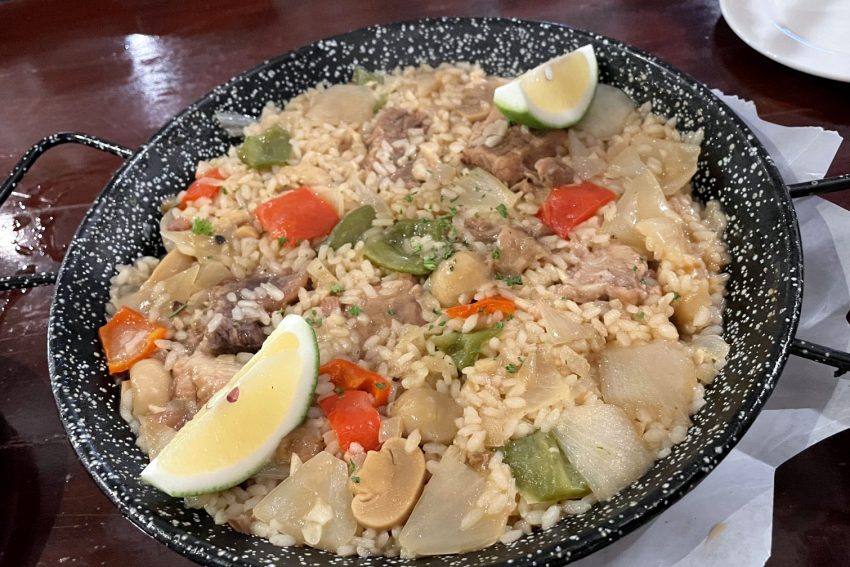 After having had a great experience on our earlier visit, Mr. B wanted to have another go at Alba. This time around, we opted not to call ahead of time and instead wished for luck that a table was available. We decided not to order the paella by phone either; we weren’t too hungry and wanted to choose among the many options on the menu. While parking had become a bit difficult, a table was free by the time we walked in and we were seated at once.

Again, our eyes had to gloss over the many pages that was Alba’s menu. In the end, we settled for some morcilla sausages and calamares for our appetizers. It was my first time trying a morcilla sausage, but I knew that it was made of pork blood. I typically enjoy a good dinuguan, so it came as no surprise that I also loved this variation of a blood-based dish. I also liked the crisp casing that made these sausages more texturally interesting. The sausages were served already cut up, making it very easy to have bites one after another — a slippery slope, I must say, considering that these morsels could have a tendency to taste too rich after having too many successive bites.

A serving of calamares soon graced our table. The portion was generous for an appetizer, and the squid rings looked scrumptious. Upon tasting, however, they were a little bland. It was nothing that couldn’t be cured by a dose of salt, and luckily a shaker was available on the table. The garlic mayo that came along with it was somehow greasy, which I could only assume was due to improper emulsification, but it was indeed very garlicky.

For our mains, we only chose two: paella con tuhod y batoc and, of course, another go of that delicious salpicao. At first glance, the paella that arrived on our table was a bit too wet. I wasn’t sure whether it was done hurriedly or if it was to accommodate some carryover cooking; but in the end I knew that I did not like that texture. The spoonfuls of rice, however, were very rich. I honestly couldn’t figure out what was in the broth that cooked that rice, but it was very, very flavorful. The problem, however, was that the beef pieces of knee cap and neck also amplified the richness of the dish, which somehow resulted in an overly rich dish that no amount of lemon or lime could correct. It would have been fantastic in very small portions, but to finish an entire paella pan was an uphill battle. The peppers were a bit mushy but its distinct sweetness provided some sort of relief from the heavy flavors. Disappointingly, the bottom of the dish was unevenly heated, rendering some good soccarat and some portions simply too bitter and burnt.

But, it was the salpicao that we had been longing for and thus had come back for. This was the dish we tried previously that we enjoyed so much that it set the bar for some well-cooked beef. Unfortunately, it was no longer the same when we had it again: it was tougher. Then it dawned on us that a critical component was missing: our server forgot to ask the doneness we preferred, and we forgot to suggest it too. That was the only difference that downgraded the dish from very, very good to just so-so in our minds. Don’t get me wrong, the taste was still good; it was just the texture that was off. Next time, it would be crucial for us to specify that we wanted a medium-rare salpicao, and hopefully it would be a blast.

All in all, our entire meal could only be characterized as overly rich, but it was perhaps some wrong choices on our part that made everything unbalanced. I was lucky to have ordered some dalandan shake early on, which truly was very good, to dispel that umay factor, but in the end we couldn’t finish all that we ordered. To be honest, our second stint at Alba was a bit of a let-down. The service wasn’t as great as our first experience was, and the ambiance was somehow ruined by an old lady who was blabbering too loudly (definitely not the restaurant’s fault, but made the dining experience less stellar). Still the same, the dishes were mostly good enough, and I’m sure that this wouldn’t be the last of our visits.