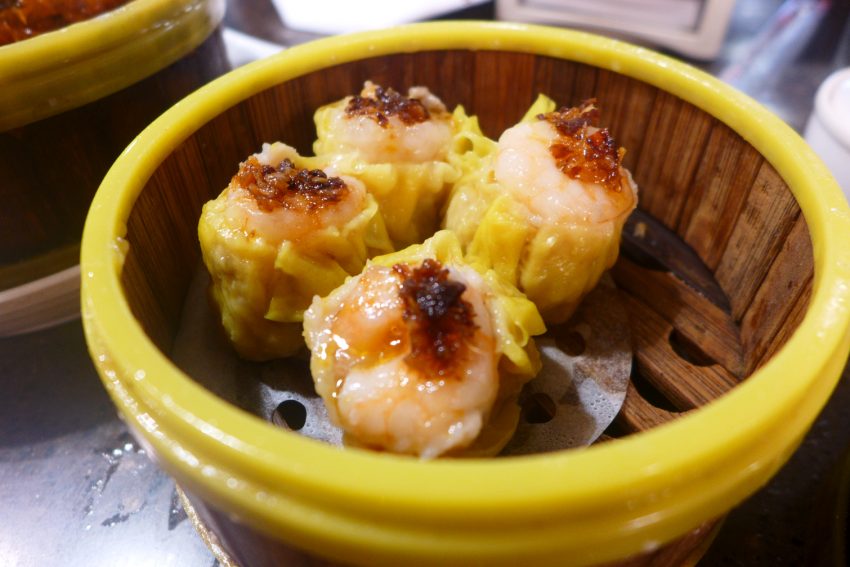 We headed to Banawe after craving for a dim sum meal. It was another late lunch, which was quite frankly a smart penny-pinching move as the dim sum options were cheaper at odd hours. Knowing the scarcity of parking in Banawe, we had to call the restaurant to ask whether parking was available, to which they replied positively. Indeed, parking spaces were relatively abundant for Banawe standards, although most parking spaces were occupied. Luckily, one vehicle was just heading out and we quickly took its spot.

The restaurant was located on the third floor of the building. It was very spacious, but even at past 2 in the afternoon, it was busy. Nonetheless, we were seated promptly and was handed the paper where we penciled our choices in. Service was quick, and in little time, these small bamboo steamers were scattered on our table.

I was foolish enough to order these three on the same meal: pork and shrimp siomai (P90), XO siomai (P110) and sharksfin dumplings (P90). They all had the same flavor profile with subtle differences (at least to my non-Chinese palate). Admittedly, it was the rush of seeing so many kinds of dim sum on one list that sent my brain haywire. In the end, I was happy with just a regular siomai. I was unfamiliar with the XO sauce so I couldn’t spell the difference between this new-to-me sauce and a regular shrimp paste, and I wondered how it would have made the siomai better; I simply preferred the ones without the said sauce. The lone shrimp atop the XO siomai, however, was a great addition. The sharksfin dumplings were good too, plus it’s better for the body as it was filled with vegetables.

The hakaw (P115) had a very thick wrapper, which was far from good. Apart from the sweet juicy filling of shrimp, I always look for that silky texture of the wrapper. This version failed miserably. However, I was won over by the bird’s eye dumplings (P120). It was something recommended to us by our waiter, and he sure knew what he was saying. I didn’t exactly know what was inside the dumpling, but it had the sweet flavors of seafood, and a flavor profile akin to a hakaw that I was yearning for.

The xiao long bao (P105) was underwhelming at first, since I sipped the soup prior to eating the entire thing. On my second piece, I decided to simply eat the whole thing at once (of course biting some wrapper to let some steam off first), and it was then that I enjoyed the dumpling better. I still preferred Shi Lin’s version over this, but this was good enough to my less-than-discerning palate for Chinese cuisine.

Chicken feet (P80) was one of those dim sum dishes that I just couldn’t get into the habit of eating: the actual foot just put me off. I asked Mr. B to snap one finger (or toe) off for me to taste, just so I could skip envisioning the entire foot. The gelatinous texture was easy to get over, as it was almost any tendon-like meat, but it was the sauce that fell out of favor for me. I didn’t like it at all.

The bean curd roll (P110) was another variation of the pork-based dumpling. I would have enjoyed the bean curd wrapper and the oyster-based sauce had we not had too many other pork-based pieces. By the time we had tried most of these dim sum dishes, it was easy to get tired of the flavors as they run too much alike. It was clearly my fault for ordering these similar dishes, something Mr. B disliked but didn’t say anything about until we finished the meal. In his words, we had too many ‘siomai’, referring to all the dumplings we ordered.

We wouldn’t complete a Chinese meal without some salt and pepper spare ribs (P400). King Chef’s version was very meaty, but it lacked the complexity of flavors I was imagining. Flavor-wise, I still preferred North Park’s, although I wish theirs was as meaty as King Chef’s.

What I found particularly commendable with King Chef was the service. Most of the dishes were served swiftly, but more importantly, I was impressed with the willingness of each staff member to serve you. In other restaurants, a particular wait staff usually only serves the table he was assigned to, but in King Chef, any concern was addressed by anyone in their staff. It was some of the quickest service I’ve encountered here in the metro, and as a customer, it was truly a superb experience.

More on King Chef on a later post. Until next time, happy eating!