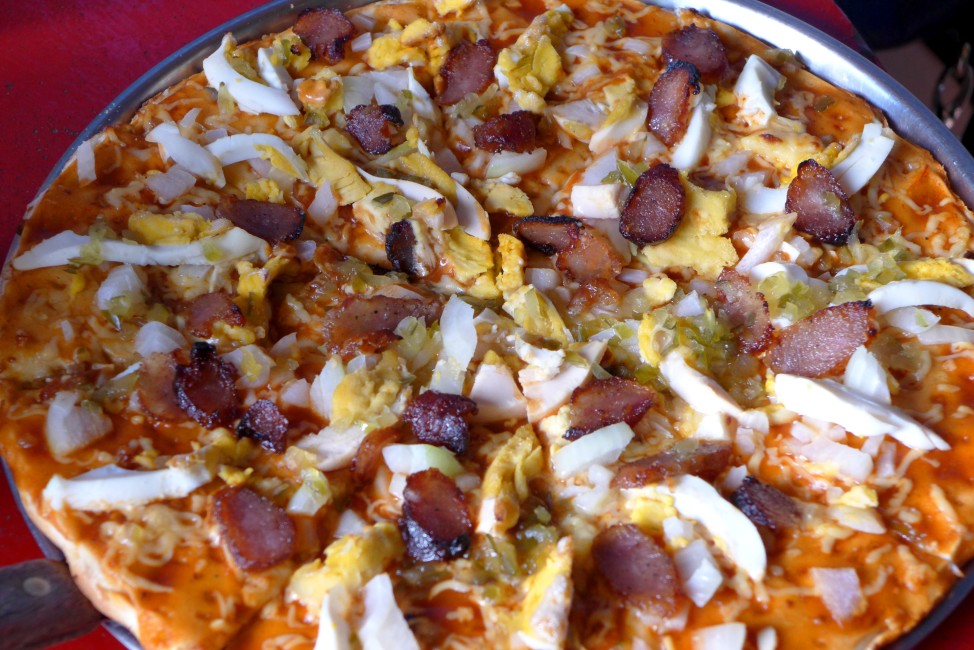 Famous for its culinary tradition, Pampanga boasts some of the Philippines’ best dishes. In fact, some of those uniquely Filipino dishes were born out of the ingenuity of the Pampangueños. On the day of the Giant Lantern Festival, my friends and I decided to go on a food trip in Pampanga. Along with this, we sought to take a peek of Pampanga’s culture by visiting some of its churches and old houses.

The trip began with a bus ride a quarter before nine in the morning from Cubao headed to Dau. A little more than an hour later, we were already at Dau’s bus terminal, waiting for our rented car to pick us up.

Due to my fellow traveler’s request, we found ourselves in this little coffee shop in SM Pampanga for our first stop – Caffe Bene. I ordered honey cappuccino, one of the shop’s limited holiday offerings. To my surprise, the coffee was actually very good – a great way to start the day!

Next, we headed to Angeles City center to find Camalig Restaurant. Camalig is a Filipino word for barn. True enough, this was formerly a barn converted into a restaurant. Unfortunately, nicer portion of the restaurant was closed, and we had to make do with dining outdoors. Camalig Restaurant is famous for its pizza, wherein it incorporates Filipino flavor to this Italian dish by using ingredients like salted egg, tuyo (dried fish), and longanisa (local sausage). We tried its most famous pizza, Doy’s Kapampangan, and Marco’s 3-way Tuyo version. The tuyo pizza had a lot of promise when it comes to flavor, yet the dough of the pizza didn’t meet my expectations. The longanisa one had a more traditional meaty pizza flavor.

To burn the pizzas we ate, we took a break from the food fest and went to Museo Ning Angeles. Visitors are required to make a donation of 50 pesos per head. It looked like an old house converted into a museum. On the first floor were dioramas and photos of Pampanga heritage – from various Filipino traditions like fiesta and pamamamanhikan to historical stories of how the Americans made Angeles the city of angels after establishing the Clark Freeport Zone. Upstairs were displays of potteries and kitchen utensils, along with a display of Pampanga dishes.

Opposite the museum was the Church of Angeles City. We went inside, took a few minutes to pray, then went back on our tour. We decided to walk to the old Pamintuan house, since it was just around the corner. Unfortunately, it was closed. It turns out you’d have to make arrangements prior to visiting. Disappointed, we simply snapped a photo of the facade.

We headed back to the city center to find Gill’s Buko Sherbet in Nepo Mart. It took us a while before finally arriving at the store. I’m not sure if it’s not too famous here, or we were asking the wrong people! When we finally arrived at the shop, I ordered a buko lychee sherbet for myself. Talk about brain freeze! 😛 I wish I tried their ice cream too.

Next, we headed to the restaurant pioneer of sisig, a Filipino dish made of grilled chopped pork and onions. It was sizzling (as expected) when it was served on us, and we instantly had to mix it, else the meat would burn. Fatty, albeit very delicious. This one had a more slimy texture than the ones I tried in Manila, but with rice, everything goes well. Yum! Tip: Order this with Royal (the orange soft drink), just like the locals do! We were the only ones who drank Coke.