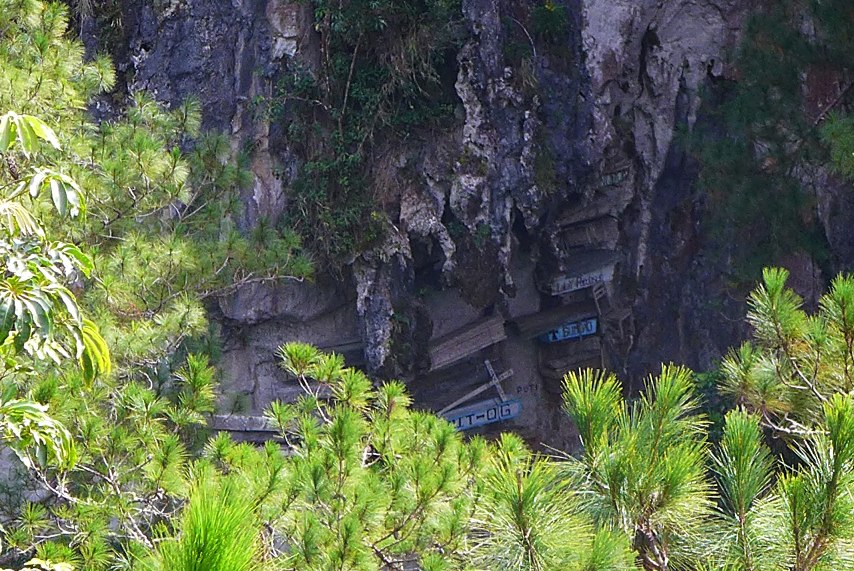 The rather disappointing sunrise at Kiltepan Peak led us to search for more spectacular views that Sagada could offer. Again, our group decided to split up — one went to Bomod-ok Falls and the rest headed to Echo Valley.

The gateway to Echo Valley began at a short distance from St. Joseph Resthouse, where we spent the night. Locals sat on the benches behind the St. Mary Episcopal Church, while a small group of boys were playing basketball at the court. Flowers spread throughout the vicinity of the church; their colors were vibrant as ever. Stargazer lilies, poinsettias, and sunflowers were abundant. The church stood beautifully with its stone walls, gothic doors and rosette windows. It was small, but for a town as far from the bustling metropolis as Sagada, it had a grandeur of its own. Unfortunately, we weren’t able to get inside — there was a service when we passed by and it was already closed by the time we got back.

Pine trees lined the trail going to the Echo Valley. Just a quick walk from the church, we were already faced with a junction. We followed the paved path, but to our dismay, it wasn’t the right trail. We went back to the junction and took the stairs instead.

We followed the only visible trail, where we met a group of kids offering their guiding services. Believing that we could manage on our own, we simply said no and went on our way. We encountered another junction, this time marked by a tomb. Since we were averse to any slope, we took a left turn. Soon, we faced a dead-end, our adventurous selves kicked in, making us trek a trail that led to the unknown.

We continued on this trail until we reached another set of tombs. Realizing that we were on the wrong path, and that there was nobody else on this trail, we decided to go back. Back at the crossroads, we saw a group of tourists and took advantage of knowing the direction they were headed. Apparently, you would have to climb the stairs to the cemetery and follow the distinct path. This would lead you straight to the Echo Valley.

From the Echo Valley, you could already see the Hanging Coffins. Some guides even offer to lead a trek down the valley, but we decided to skip that part since it was almost lunch time by the time we finally figured out on how to get to our destination. Of course, we tested the echoes — shout your heart out and hear your voice reverberate in the mountains.

Our trek back to town was quick. After all, we already knew the way. 😉

How to Get to Echo Valley

2. Follow the only path until you reach a junction. Take the stairs on the left side. Do not follow the paved path.

3. Continue on the dirt road until you reach another junction, which is marked by a tomb. Climb the stairs towards the cemetery (or the cell tower).

4. Follow the only trail and you will be in Echo Valley in no time. 🙂

1 thought on “Finding Our Way to Echo Valley”