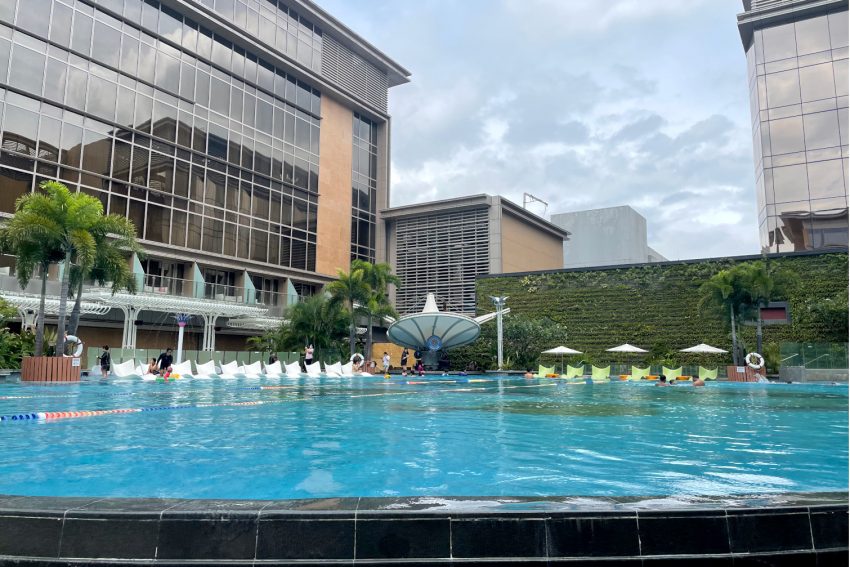 Early on, we knew that Day 2 would be a hectic one. It was, after all, the day of the main event: my friend’s wedding.

We did not avail of breakfast at the hotel, but a Starbucks shop was within walking distance to get our morning fix. Our wedding preparations rendered us too busy for the morning to do anything else. The lighting in the room wasn’t the best to do one’s make-up, despite the room having floor-to-ceiling windows. However, I appreciated the magnifying mirror at the bathroom’s vanity.

My friend later learned that the kettle in our room wasn’t working. It was a let-down that it took such a long time for the replacement to arrive. Admittedly, it was during the checkout hours when we made the request, but then I wished service was a bit speedier.

As we left for the church, it was only then that I discovered that the parking lot was not accessible directly from the hotel elevator. We had to exit the hotel to get in another elevator that led to the parking garage. It wasn’t such a big deal, but it was certainly less than ideal. Parking is free for hotel guests, although another friend informed us that parking had a flat rate of P50.

The wedding was beautiful and the reception was fun. It was only after the event that I realized how our enjoyment of the wedding was influenced by our decision to stay in the hotel. There was very little stress and indeed it felt like a mini vacation of sorts. Despite still not being sold on the idea of a staycation, I totally didn’t regret doing this one.

We decided to check out the area around pool two days after our arrival, as it was closed on our first day owing to the torrential rain. The staff were quick to hand towels as we made our way towards the pool area, but my friend and I declined as we didn’t have any desire to swim. I was honestly surprised to find quite a handful of people enjoying their morning swim (two friends included), but there was ample space for everyone to do a little swim on their own. As we exited, we noticed many kids starting to arrive. The tone of their voices just showed how excited they were!

The airport was visible by the elevators, but it was nothing compared to the view that the junior suite had. My friend who was the bride had this corner room with a magnificent view of the airport (at least to someone who liked watching planes come and go). This junior suite was very beautifully but minimally designed, with more touches of Japanese interior than a Filipino one. It housed two Japanese toilets and a tub, a walk-in closet and a living space. Of course it came with a hefty price tag too.

After heading back to the room after breakfast (a simple meal from McDonald’s was the deal), we called the front desk to ask for a late checkout. Our new check-out time was granted at 2pm, which to me was very generous.

The check-out process was arduous, to be honest. It was by far the most painful checkout process I had ever encountered (and yes, that included the month-long stay in a hotel in India). To be fair, I was given an option during check-in to opt for an express checkout, but I declined as prudent me wanted to hold onto that credit card charge slip stating that the deposit transaction had been cancelled. I didn’t know whether the front desk staff at the time was less experienced, but he looked frazzled with the basic process of guest checkout. I was told that the deposit would be cancelled in a few days, but it took so much longer than promised. It’s not that I needed the credit, but it somehow showed how inefficient they were when it came to these things, especially considering that this was a local transaction.

One thing I had failed to mention until now were the very beautiful pieces of art scattered around the hotel. I personally loved the light fixtures at the lobby, as well as some geometric sculptures located by the elevators. It was a shame that two Orlina pieces were tucked behind the front desk, so barely anyone took notice. I guess that they were trying to protect these sculptures, but it was sad that no guest seemed to enjoy them.

With our bags packed and loaded in the vehicles, it was time to head for lunch. We made our final trek back to Newport Mall and chose Crustasia as our pit stop.

I was quite excited to have a beef rendang fix, but it failed my expectations miserably. It honestly was more akin to a kaldereta than a rendang; it was certainly not as full of spices as I predicted. The pad thai was one-note and screamed nothing but sourness; the sweet and salty components were clearly missing. The satay were quite enjoyable, although the portions were small. The egg foo young was meh; it was nothing to write home about. And so was the Taiwanese pork belly. I was a bit disappointed with their flavors, as they lacked the punch that typical Asian dishes had. Don’t get me wrong, the dishes weren’t flavorless, they just weren’t as flavorful as they should be. The service needed to improve too.

With that, we bid the Newport Mall and Sheraton Manila Hotel adieu and made the long way back to Quezon City…it took us almost three hours!