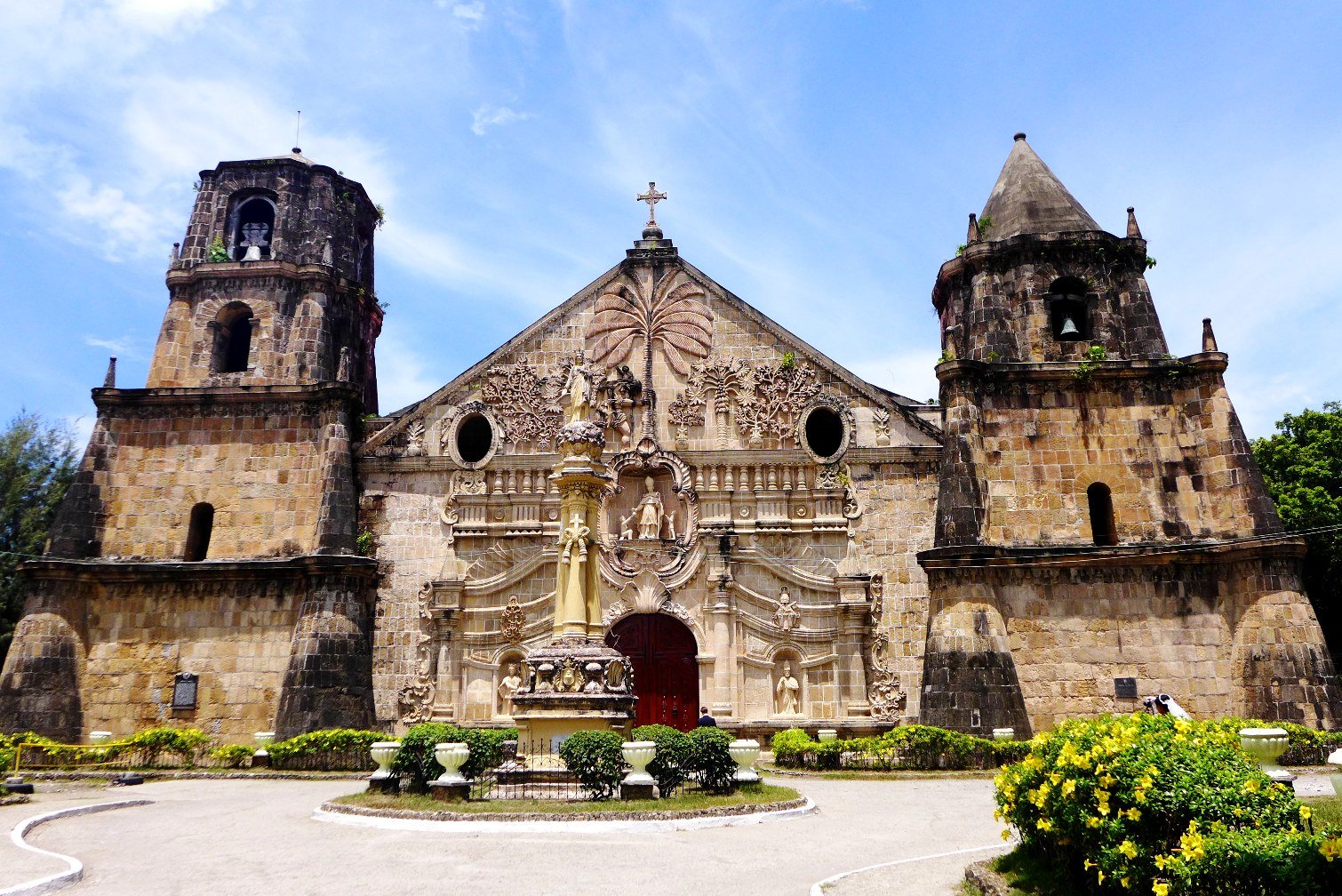 Of all the must-see attractions in Iloilo, it was Miag-ao that topped the list. After all, it is one of the four baroque churches in the Philippines hailed together as a heritage site. We challenged ourselves to not hire a vehicle for the journey, and opted to go by public transport instead.

Two terminals served the southern Iloilo route: the Mohon terminal near Molo and the Iloilo Terminal Market near the City Center. As the latter was much closer to where we were staying at, we chose to get our jeepney ride there.

A terminal it didn’t seem to be. It was more a produce market, where bulk quantities of vegetables and beans were unloaded from vehicles and wheeled out to various stalls. We had to ask a few times where the jeepney bound for Miag-ao was located, and the friendly locals easily pointed the way.

Contrary to my earlier research, you did not have to ride the jeep bound for San Joaquin to reach Miag-ao, as there’s a specific route destined for Miag-ao itself. Only a few passengers were present when we boarded. Worried that it would take forever before we would leave, we asked a fellow passenger if the jeep would wait to be filled up before heading out. “There’s a time limit,” she said.

Shortly after, we began maneuvering the busy roads of Iloilo City. It was already mid-morning and a number of vehicles were already plying the streets. A lot of road works were on the way, contributing to a heavier flow of traffic, but it was still manageable to someone coming from Manila’s traffic nightmare.

Soon, we stopped at an intersection close to Molo Church, which was brimming with patrons that day. You would think it was a Sunday, considering that the playground was full of kids and walking vendors were plenty. A newly-wed couple was even taking their photo in front of the church. It was the town fiesta, according to the local who was riding the jeep with us.

We passed by Mohon Terminal, the other terminal servicing the route we were taking. The traffic soon eased. The countryside took over the view as we left the rush of Iloilo City.

The beauty of this ride was the local life you would see by the roadside and even inside the jeep. Locals hated to sit way inside, insisting on seats closer to the door. Everyone would call the attention of the driver when he couldn’t hear the words ‘lugar lang’, that phrase you must say when you intend to get down (an equivalent of ‘para po’ in Tagalog). A conductor collected the fare and helped passengers with their belongings – it was my first time to see a conductor for a jeepney!

Outside, lush farms and green hills took most of the natural landscape. Houses were made mostly of concrete, except for a few made of wood. We saw several stalls selling stuff in blue packages, which we later learned were scallops. A lot of schools and colleges were founded near the main highway, a testament to how important education must be for the Ilonggos. But what you should be on the lookout for were the churches.

Aside from Molo Church, several noteworthy churches could be seen from my window. At the junction leading to Arevalo stood Santo Niño de Arevalo Church, with its simple white concrete façade and colored trimmings. Tigbauan Church’s stone building brought me to the past, but the basketball game nearby reminded me of the present. It was Guimbal which took the cake, not only with the limestone church façade, but with its huge white municipal hall. I never thought this town would have such a beautiful town center.

Towards these last two towns, the seascape appeared into view. Resorts were plentiful. Even a maritime training facility was constructed just off the main highway. Boats were parked by the shore, and fishermen were busy fixing or making new boats. As we got closer to Miag-ao, the conductor moved to collect our fares and soon pointed us to the beautiful Miag-ao Church.

We got down and walked towards the entrance of the church. Of the three UNESCO baroque churches I visited, this one stood out with its gorgeous façade, with the most intricately carved relief sculpture I had ever seen in the country. Two asymmetric church towers framed the 3D canvas. Some limestone blocks had been discolored with age, while others were vibrant as though they had been newly mounted.

With the front doors closed, we approached a local to ask whether we could actually go inside. Fortunately, they kept a small side entrance open to the public. Inside, the church’s thick walls were evident. The interiors were typical of most old churches in the country, except for its rather lavish and ornate altar.

We said a short prayer and bid our goodbye. Back to Iloilo!