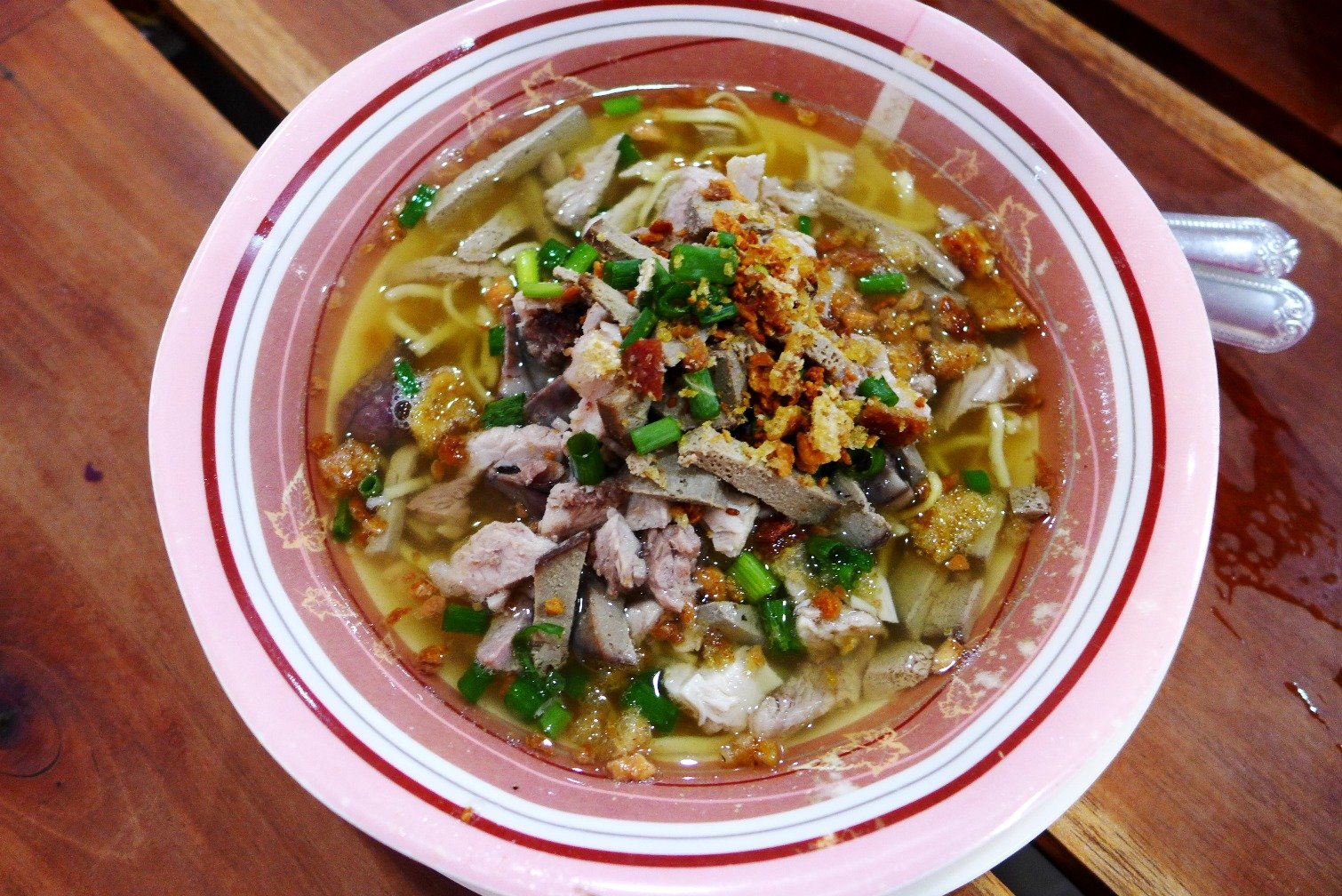 No trip in Iloilo would be complete without sampling its array of Ilonggo dishes. Our time was short, but we got to sample some of their best dishes.

Batchoy is one of the most famous Ilonggo dishes. This noodle soup is topped by a lot of innards, a testament to how Filipino cuisine utilizes every part of a slaughtered animal.

Though chains of Ted’s and Deco’s could be found around the city, we wanted to sample batchoy from a less-commercialized establishment: Netong’s. Prior to the trip, I also read that Netong’s was the most flavorful of the three batchoy businesses.

Netong’s was located in La Paz Public Market. While it was not terribly easy to find, it was easy enough to ask the locals to point where it was. The shop was clean and air-conditioned, and we were handed the menu at once. We chose to sample three of their batchoy variants and a pack of puto as a side.

Our batchoy bowls soon came and we were surprised at the very big serving of Mega Bowl. Clearly, it was superior in size. However, it was Extra Special that won our palates, which we think was a lot better than Special. It was the most flavorful of the three and has a more manageable size compared to the Mega Bowl.

Towards the end, I found it a little greasy. It’s good to have a side or a drink to clear up your palate every few spoonfuls.

Coffee from Madge’s and Coffeebreak

Not far from Netong’s La Paz Batchoy was Madge’s, a popular coffee hangout for locals. Instantly, I was transported back to Georgetown in Penang, where locals enjoy a cup of coffee even in the middle of the morning, while catching up with friends.

Noticing that we weren’t from the area, the manager helped us secure a table. We were then given a menu of drinks then we ordered from a friendly waitress. A few meters away from us, coffee was being prepared – straining the coffee beans, and then tossing the coffee from cup to cup.

Prior to coming here, I thought little of Madge’s. But then it surprised me big time. The coffee was good…really good. No wonder it was packed with patrons even during a supposed off-peak time. I couldn’t help but compliment the manager (or was he the owner?) for serving great cups of coffee for such an affordable price.

Want to head to a more upscale coffee shop? Head to Coffeebreak, Iloilo’s local coffee chain. I only tried a cup of their frappe, which was great, though a lot more pricey than Madge’s.

Think of bulalo, but whose fattiness was cut with a hint of sourness – that was kansi. I couldn’t really imagine a sour bulalo, but upon tasting, I found it more balanced than the usual bulalo. The tartness really cut through the fat, which made me enjoy the dish longer.

We tried this dish in Patpat’s, located in an old house in Jaro, Iloilo. Service was quick, and food was cheap.

I initially wanted to try more Ilonggo dishes such as laswa, KBL (kadios, baboy, langka) and binakol for one of our meals, but I ended up with a seafood feast. We headed to Plazuela de Iloilo for our dinner. While it was teeming with locals participating in a Zumba session on that weeknight, its food scene could hardly be found. With the exception of Jo’s Inato, only Ponsyon had its fair share of occupants.

Ponsyon is part of a group of local restaurants, but it specialized in seafood dishes. To be fair, they also serve traditional Ilonggo dishes, but I found them a little steep in prices. A seafood dinner was then in order. We had Adobado nga Alimusan (Saltwater catfish with sauce), Sinugbang Pantat (Grilled Catfish), Baked Scallops and Squid “Gambas” (sort of a sizzling squid).

While we all enjoyed the scallops and the grilled catfish, it was adobado nga alimusan that was the most remarkable. The sauce was what made it really, really good. Try it. 🙂

*I chose Plazuela de Iloilo over Smallville because I really wanted to try Maridel’s cakes, but we were already too full for dessert after our dinner.

It’s a small fast food stop tucked in Calle Real. It’s a little bit dated but it was full of locals. Grab a table, order from a waitress, but pay at the cashier after your meal. I had their lomi, which was forgettable, but their siopao was superb. The bun was the softest I had ever had, and the filling was equally delicious. I tried both the Regular and the Jumbo, to which we found that the regular would do. My father tried the Queen, which Roberto’s is famous for, and found it really good too.

The shop owner even told me I could bring some frozen ones home, but I declined as we were still traveling elsewhere before flying back home. Next time, I guess.

Oh, if I ever had the chance to create my perfect siopao, I’d easily pick Roberto’s for the bun and Kowloon for the filling. Yum yum.

If only I had more time, I would have wanted to taste more Ilonggo dishes. Here are a few you may want to try: