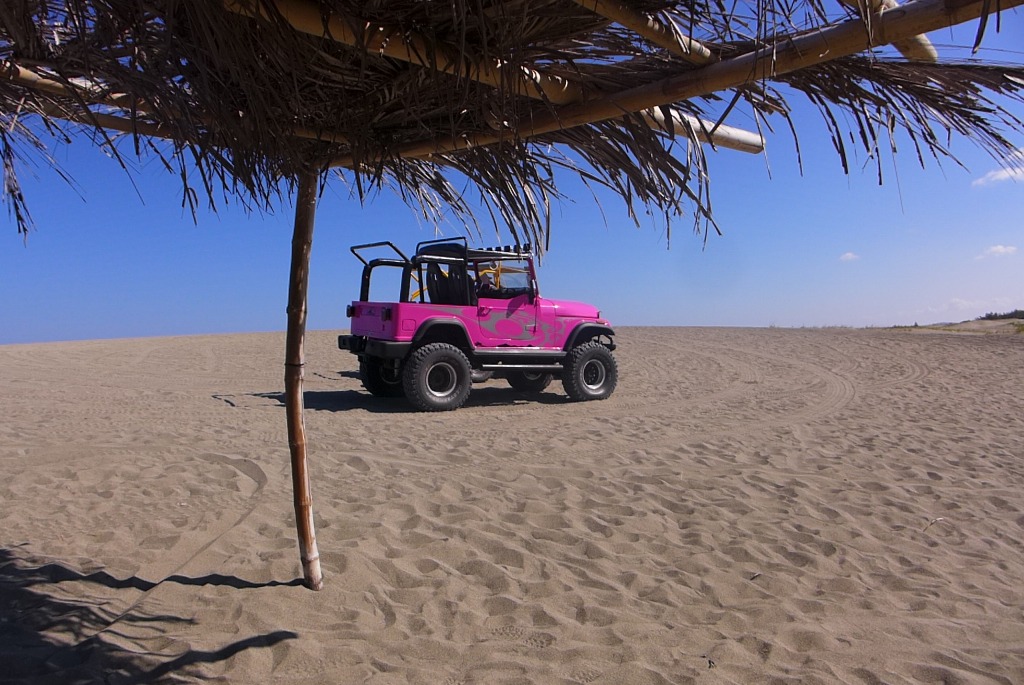 Many times, I find myself doing something I never thought I would do. Despite my love for travel, I’m not the most adventurous person out there. Adrenaline rush doesn’t always spell fun to me. Yet, I’ll always be grateful for the friends who often lure me into believing that “danger” is far from reality. Without them, I wouldn’t have surfed on the coast of Baler, swam with the whale sharks in Cebu and climbed a mountain in the Cordilleras. I can now officially add sandboarding to that list of things I did despite being a scaredy cat.

We awoke the next morning early, as advised by almost every Ilocano I met. The sand gets hot as the sun goes up, a fact that we verified later in the morning. We asked our driver to bring us to the sand dunes in Paoay, and rented two 4×4 jeeps at the entrance of the complex. Each vehicle could accommodate four to five people, but they also allow six on board, they say.

Unbeknownst to me, the 4×4 ride would be an experience itself. I initially thought that it was just there to bring us to the point where we could surf the sands, but it was far from that. You cling on tight to the bar as the vehicle trudged along the steep hill of sand, and then feel your stomach flip as the 4×4 go rushing down the slope. Squeal in delight (or horror) as you wish – there was hardly anyone around except for the other people in your vehicle (I’m glad they are my friends!). Then, you’d be given a little room to breathe and enjoy the vast landscape of sand. The process then repeats, only the slope gets higher and higher! It was scary but enjoyable at the same time.

We arrived at the sandboarding area safe and proceeded with the activity after taking few mandatory group shots and a demonstration from the staff. You start off with the lower slope, then progress to a steeper one. You can either stand or sit as you surf, but the standing position was so much more exciting than the sitting one. Only a few of us did the steepest slope, partly due to the heights, but more because of the hot sand that was already burning the skin on our feet. 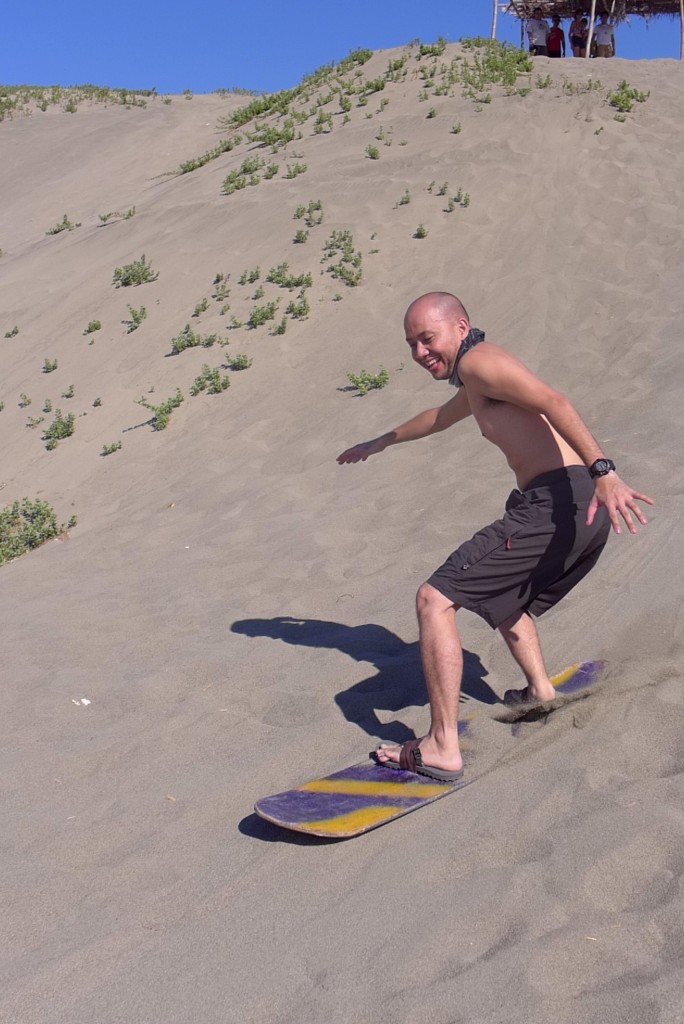 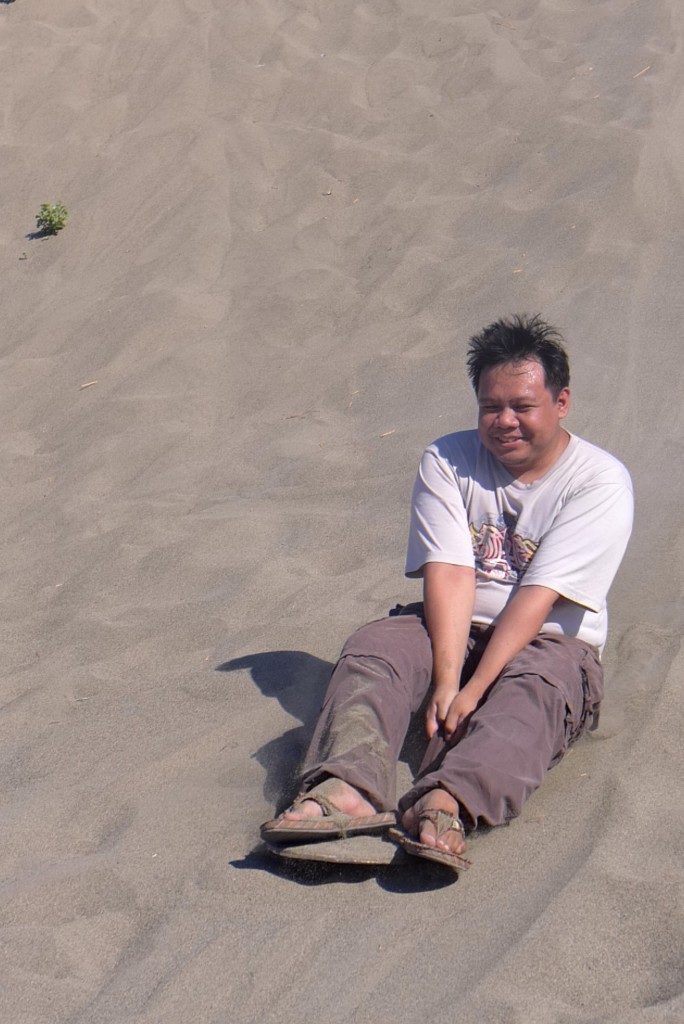 It was another thrilling ride back to the entrance of the complex. 🙂 On our way back to Laoag, we made a quick visit to the Malacanang of the North.

Hungry from the morning’s adventure, we headed back to Laoag to grab brunch. Saramsam Restaurant is one of the establishments serving Ilocano dishes. Here we ordered the famous longganisa, puqui-puqui and insarabasab. I particularly enjoyed the longganisa, thanks to the less garlicky flavor and less fatty texture. The puqui-puqui lacked the richness that more eggs and tomatoes bring, while the insarabasab was also quite good.

The interior was very quaint though some decor were not so typical of an Ilocano home. The colored glasses, the capiz shells, the clay pots and wooden sculptures, though, all reminded me of my grandparents’ house. All in all, it was indeed a very good meal.

Ilocos Norte is dubbed as Marcos town, owing to the fact that the President grew up in the town of Batac. The house is now converted into a museum and the remains of the president continue to be frozen at the building next door.

I was probably less than ten years old when I visited the place. It was refreshing to see a more organized museum. (I remember a very crowded space full of things used by the family back then.) While the Malacanang of the North featured the family life and achievements of the former president, this museum showcased his life story. 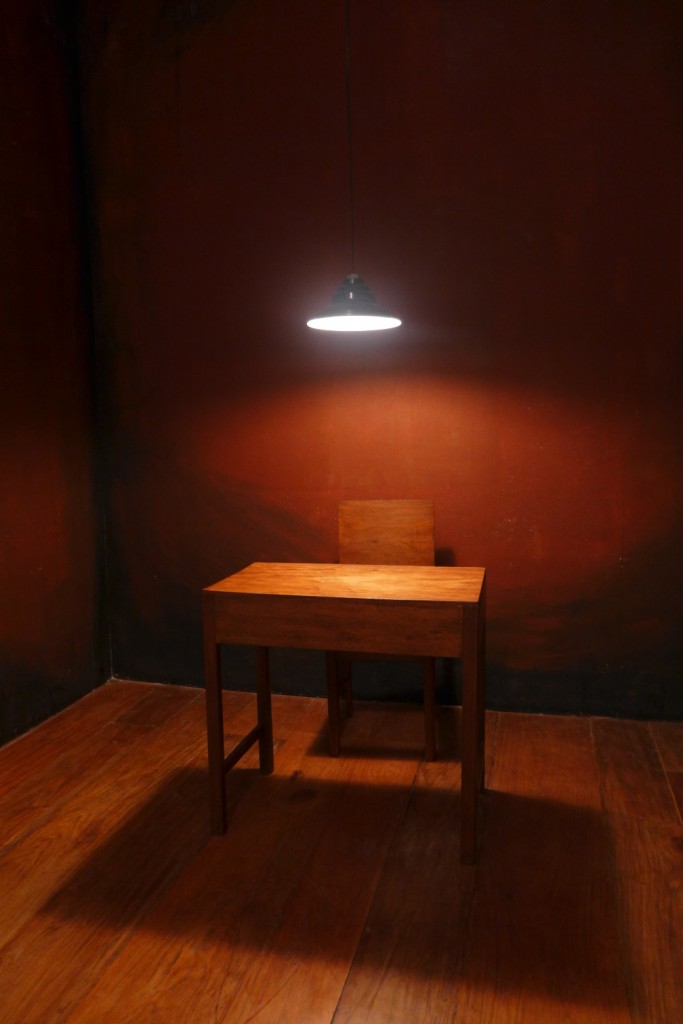 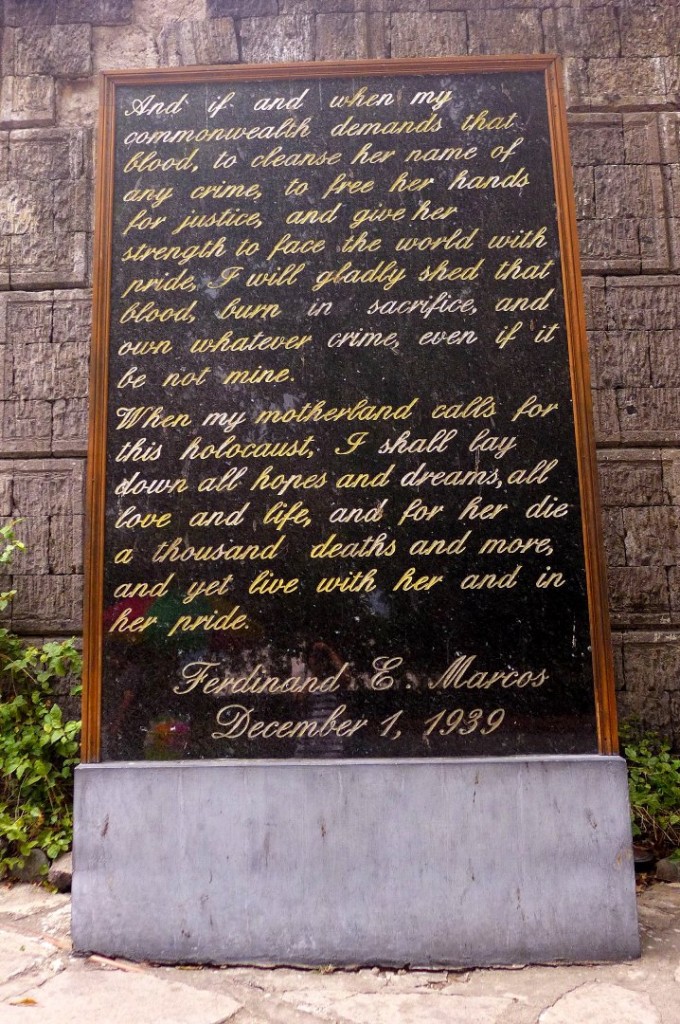 A very short walk would bring you to the building where his remains still lie — a dark, cold room filled with flowers. One short glimpse wasn’t enough; you have to go around the body to reach the exit. As someone deathly scared of mannequins, this took my fear to a whole new level.

We proceeded to Paoay Church not long after, then to Juan Luna’s birthplace in Badoc before heading to Vigan, where we spent the rest of the afternoon snacking on empanada in Burgos Plaza and watching people and horses in Calle Crisologo.  We took the night bus back to Manila that day, ending our jam-packed weekend in Ilocos.

1 thought on “Ilocos: A Love Triangle of Food, History and Adventure”