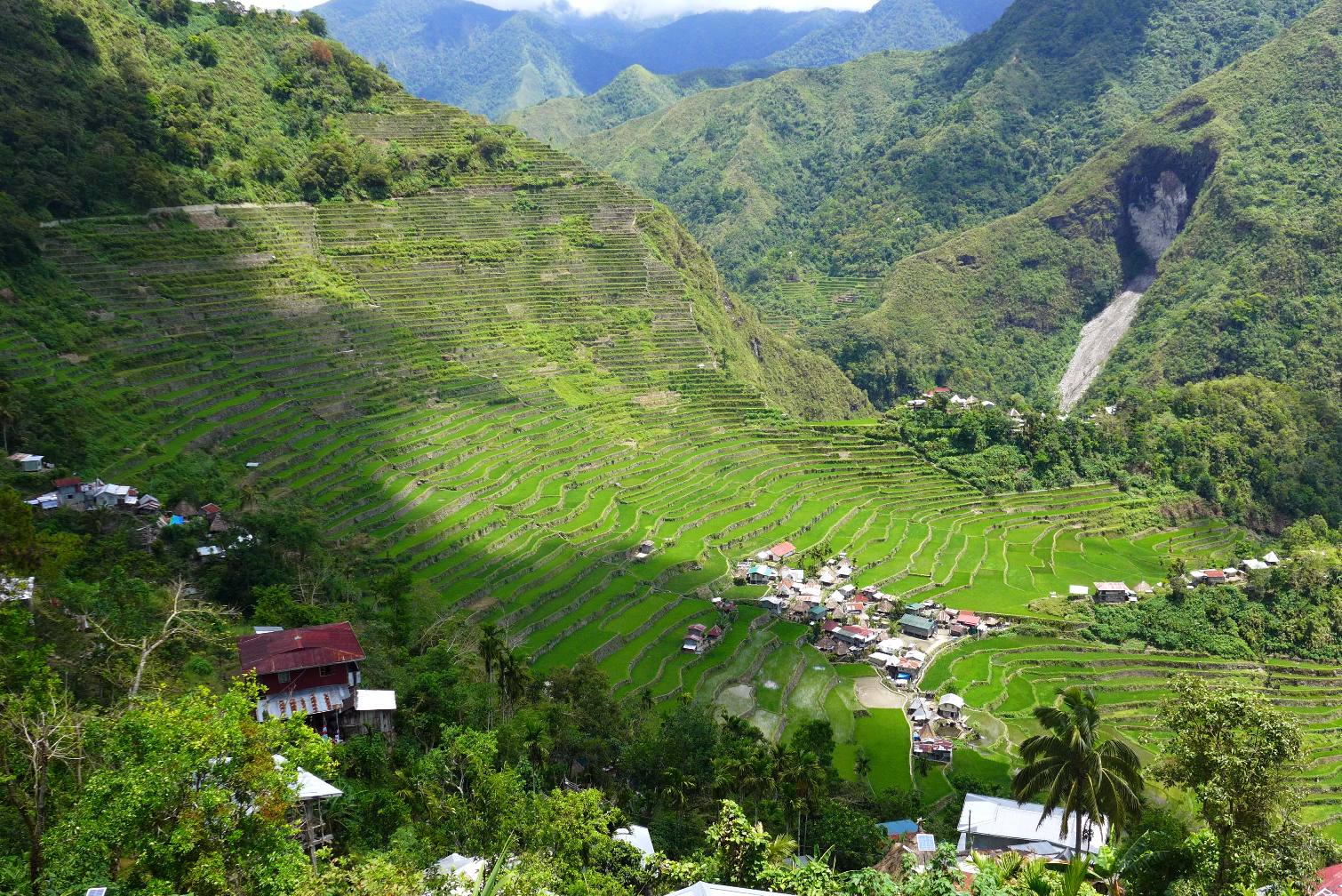 It was way back in December of 2012 when my friends and I began contemplating on visiting Batad, one of the clusters of rice terraces hailed as a UNESCO World Heritage site. Back then, we were discouraged by an inn owner. The timing just wasn’t right – the planting season has just begun and the paddies were filled with muddy water. April to June was the ideal time to visit, she told us. 2013 whipped past us and the plans of visiting Batad were buried. The thought of visiting the terraces was only revived three weeks ago, and soon we found ourselves at a jam-packed station of the only bus plying the Manila-Banaue route at the moment, Ohayami Trans.

Our bus departed later than scheduled as it utilized every available seat it has. Yes, that’s including a center seat along the aisle. Book your bus tickets well in advance – it takes great fervor to withstand the long bus ride on a makeshift seat with no head rest.

I lay awake as the bus trudged on the highway. Its creaking sound was enough to irritate me, and so was the noisy foreigner who kept talking to a friend when the entire bus was already sleeping. The light, still on, added to the burden of the task of sleeping. In addition, I was too excited to see something magnificent again. I was still a young teenager when I first stepped foot in the province of Ifugao, home to the world-famous Banaue rice terraces. It took me ten long years to go back to the first place that took my breath away.

After nine long hours from Manila, we were finally in Banaue, the jump-off point of our journey to Batad. We were flocked by the locals offering their jeepneys to bring us to Sagada, but we just moved past them and went ahead to the bus counter to get our tickets for the trip back home. There, a local named John offered us a ride to Batad for a bargain price of P1500, which we gladly took advantage of.

Shortly after filling our empty stomachs with breakfast and a great first view of the rice terraces, we started our journey to Batad Saddle, about 16 kilometers from the center of town. I initially expected a bumpy ride, thanks to the rough road to Sagada ten years back that would forever linger in my memory. But lo and behold, I was surprised to find out that the road was paved. We arrived at the Saddle after an hour, which signaled the start of the long way trek to Batad.

We hired a guide to bring us to the village and the Tappiya waterfalls from the Saddle, since he offered his services at par with the price of a guide to the waterfall only. We were informed that the long cut was closed, so we took the shortcut going down – 412 steps of various heights comprised the winding staircase. I thought that when we finished this, we’d have little effort to get to the village, but I was wrong. We weren’t even a quarter of the way!

We descended down the steep slopes toward the village, occasionally stopping by to admire the beauty that was all around us. The mountain ranges were refreshing and the rice terraces were simply amazing. We made various twists and turns and took rests in between. After more than an hour, my knees began to shake. It was a mistake to wear my running shoes: those small pebbles were slippery as hell.

Our fatigue eased when we saw the sign ‘Welcome to Batad’. We were close. Just when we began asking if there’s still a great distance to cover, we were stopped and asked to go up a store. There, we had our first look at the grand rice terraces of Batad. Words can’t explain the grandeur of Batad. It was indeed a marvelous sight to behold.

After registering at the tourism office, we headed to our guesthouse and continued staring at the sight.

More on our Batad adventure next time. Happy travels!

4 thoughts on “We Finally Made It to Batad!”