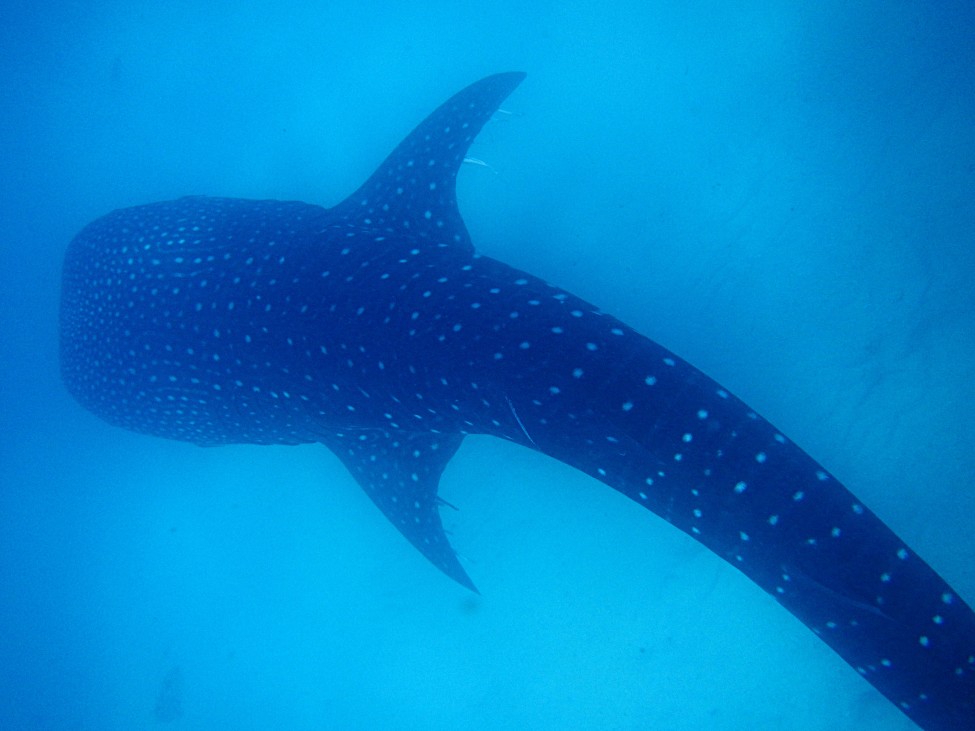 Getting to Oslob from Dumaguete

We awoke before six in the morning, and we were out of the hotel door just a bit after six. We took a tricycle to get to Sibulan port. Along the way, we saw the Claytown pottery shops, another attraction in Dumaguete. Albeit the stores were closed, you can see the crafts along the road. In about fifteen minutes, we reached Sibulan port.

We were headed to Oslob, a town where sightings of whale sharks (aka butanding) were made in the past couple of years. To get there, we needed to ride a ferry from Sibulan port to Brgy. Liloan in Cebu, then ride a tricycle from Brgy. Liloan to Oslob proper.

So, we did just that. The boat ride was short, about fifteen minutes. The tricycle ride felt a tad longer than that of the boat (though it’s roughly just fifteen minutes too).

Swimming with the Whale Sharks

The tricycle driver brought us to a resort that also offers tours. 500 pesos per person was the flat rate if you plan on swimming with the whale sharks. If you plan to just sit on the boat, you only pay 300 pesos. I think the prices double if you are a foreigner. We also paid for the resort stay, which cost 70 per head.

We then changed into our swimsuits. Word of caution: you might want to wear something more conservative, since you’d have to walk along the highway (not the shore!) to get to the briefing area. There, someone will orient you about the do’s and don’t’s during your whale shark encounter. The most important things I remember was that we shouldn’t apply sunblock, and that we should be at least a few meters away from the butanding.

Soon, we were off to swim with the whale sharks! We boarded a paddle boat to bring us to the area, then we put our snorkels on, and removed our life vests, and jumped into the water!

Here and there were these friendly creatures! There was nothing else to feel except awe, given their good nature despite the seemingly scary exterior.

At first, I was hesitant to let go of my hold on the boat. After all, we were at the open sea. Yet, I wanted to take a closer look at the butanding. Sure enough, I did just that and swam with these gentle giants. However, when I saw one of them gulp such big amount of water, my terror made me swim hastily back to the boat.

This meet and greet lasted for just about 45 minutes. We’ve been lucky with our generous boat men – the encounter should only last half an hour. In the end, we all had fun! It was another great adventure 🙂

Before I end this post, here are a few tips:

1. Go there on a weekday, and be there early. There are fewer people, so there’s more time for you and the whale shark.

2. Bring your own snorkel. Sure, it’s bulky, but if you have one, bring it. The ones they lend are crappy, and you’d want the best snorkel to make the most out of your adventure.

3. Wear a rashguard, or some conservative swimming attire. One, it’s to embarrassing to walk along the streets in skimpy clothing. Two, it’s not allowed to wear sunblock, so it’s best to protect your skin.

4. Make sure to bring an underwater camera! Capture those memories – it’s nice to look at them afterwards!

*Our food expenses are excluded here, as I believe that individual preferences vary greatly when it comes to this.

30 thoughts on “Oslob: Swimming with the Whale Sharks”