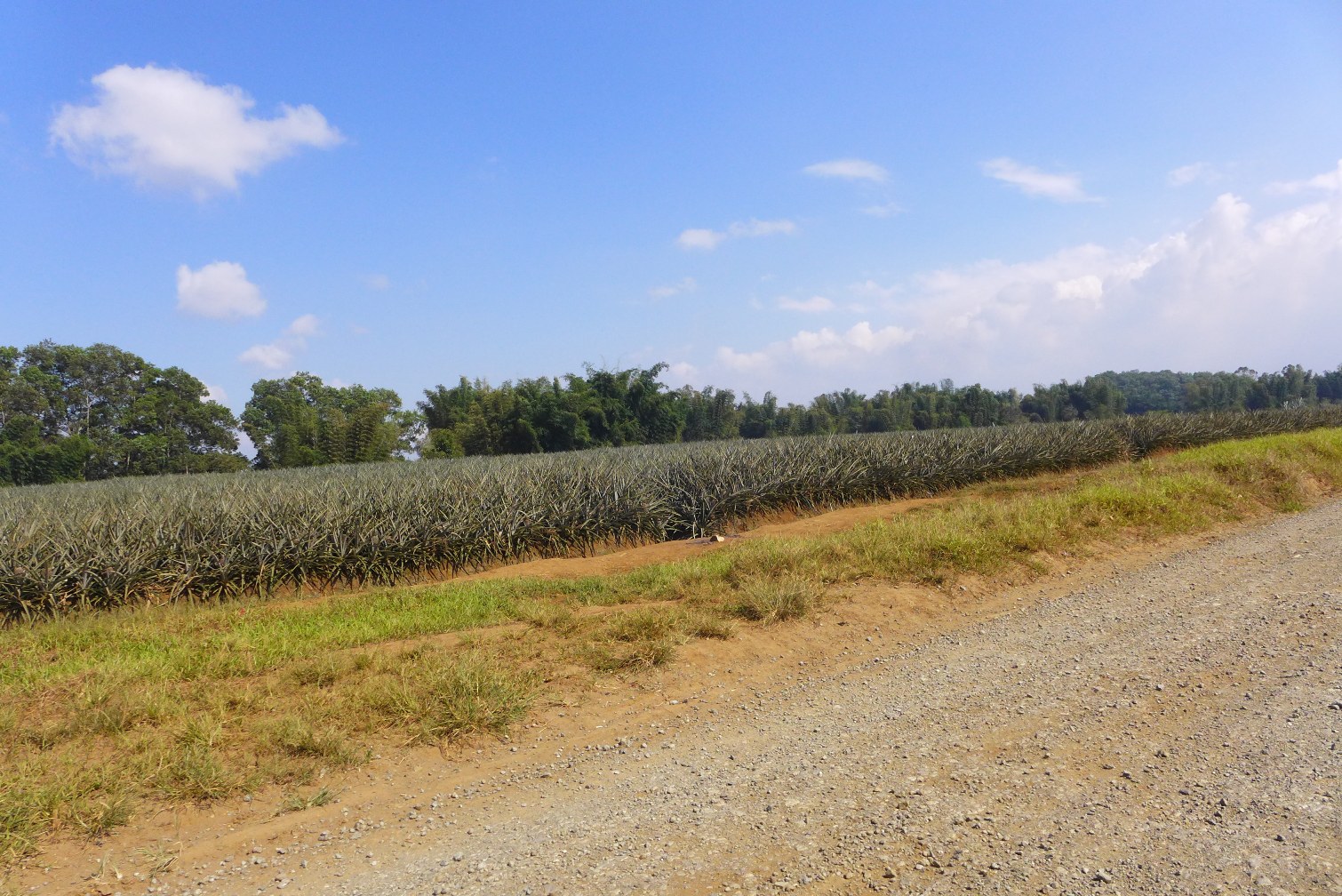 Since our ticket to Mindanao was an open-jaw one (we flew into Cagayan de Oro, but were flying out from Davao), we had to travel by land across Bukidnon, the province squeezed between Misamis Oriental and Davao.

A running city tour of CdO

We started our day at 8 am, since we wanted to do a running city tour of Cagayan de Oro before heading out to Malaybalay, the capital of Bukidnon, and where we were to spend the night. We passed by Divisoria, then proceeded to St. Augustine Cathedral. Outside, it looked promising, but its interiors weren’t as spectacular as I imagined it to be. Afterwards, we passed by the City Hall, where we saw the stunning purple lights the night before.

Side trip to the Divine Mercy Shrine

We also decided to make a side trip to the Divine Mercy Shrine. It was actually away from the road to Bukidnon, but it was highly recommended by Kuya Buloy, the owner of the van we rented for our Camiguin day trip, so we ventured out to that direction. (Note: If you are going to Iligan, you could ask your driver to drop by there since it’s along the way.)

Finally, we reached the Divine Mercy Shrine about forty minutes after we started our journey in downtown CdO. You could climb the steps leading to the statue, but since I was traveling with mostly senior citizens, I happily obliged in just taking the back road to the statue, with no physical effort required.

Upon entering the complex, you would be stopped by the staff if you are wearing jeans or leggings if you are a female. Apparently, they have a very strict dress code which you have to follow. Lucky though that I had my scarf with me to use over my leggings, but my aunts were forced to wear the unflattering skirts.

We headed straight to the chapel which was inspired by the crown of thorns by Christ. It was actually a huge chapel, whose interiors are far more extravagant than the cathedral in the city.

The Divine Mercy statue was situated in front of the chapel. As its back was facing us, we took a number of steps down to see its full beauty. You could actually climb your way to the heart, as its rays were made of steps toward the heart, but we didn’t attempt climbing it anymore. Somehow, it strongly reminded me of Kamay ni Hesus, another pilgrimage site in Quezon where a statue of Jesus Christ was placed on top of the hill, and gardens sprawled across the slopes. We said a little prayer and made our way to the exit.

That ended our visit to Misamis Oriental.

We crossed the Misamis Oriental-Bukidnon border at around lunch time. You’d know if you’re already entering Bukidnon when everyone in the vehicle had to go down to step on a wet mat to ensure that you’re not bringing foot-and-mouth disease into the province. Bukidnon is proud to be FMD-free.

We were supposed to head straight to the Del Monte Clubhouse, but our driver didn’t know where it was and assumed that it was in Camp Philips. He was wrong. It was actually on the road to Malaybalay – so when you reach the junction, head to road leading to Malaybalay instead of the one going to Dahilayan Park.

We arrived in the restaurant just on time for lunch, our hungry stomachs were already beginning to complain. We ordered the famous steak, though we just ordered sirlion since the prices were quite steep. We also tried their cheeseburger.

The cheeseburger was divine. The bun was soft, the patty was juicy and the cheese was so tasty. I loved it. It was delicious in every way, and perhaps one of the most perfect burgers I’ve ever tried. The steak, however, wasn’t as good. The meat was tough, and there were too many ligaments in one chunk of meat. The taste was just fine, but I didn’t exactly find it extraordinary in any way.

We left the Clubhouse for Dahilayan Park, a tourist attraction of Bukidnon famous for its adrenaline-rushing rides. The road to Dahilayan was bumpy…and dusty. Nestled between the rough roads were rows upon rows of pineapple, and it was actually my first time to see a pineapple growing from the plant. Soon, the pineapples were gone and different plants could be seen – bananas, corn, squash, and peppers were all covered in dust. It’s like a sand storm hit the area!

We soon arrived in Dahilayan Forest Park, an area covered in pine trees. We decided to forego the Adventure Park since we weren’t exactly into heights. (Note: The Adventure Park houses Asia’s longest zipline.) The park, though themed, wasn’t exactly what I expected. It was tiny.

I thought it was as big as or bigger than Camp John Hay in Baguio City, where you could take leisurely walks around the park, but I was wrong. We went to a viewing platform, and we’d already seen everything – the luge, the zipline, the zorb, the playground, an ATV and the coffee shop. I had no idea what to do unless to take some rides, but decided against it because the prices were too high (the luge in Sentosa was only 11SGD!). We just then decided to have a cup of coffee to spend the afternoon, until it was time to head to Malaybalay.

4 thoughts on “Road Trip: From Cagayan de Oro to Malaybalay”