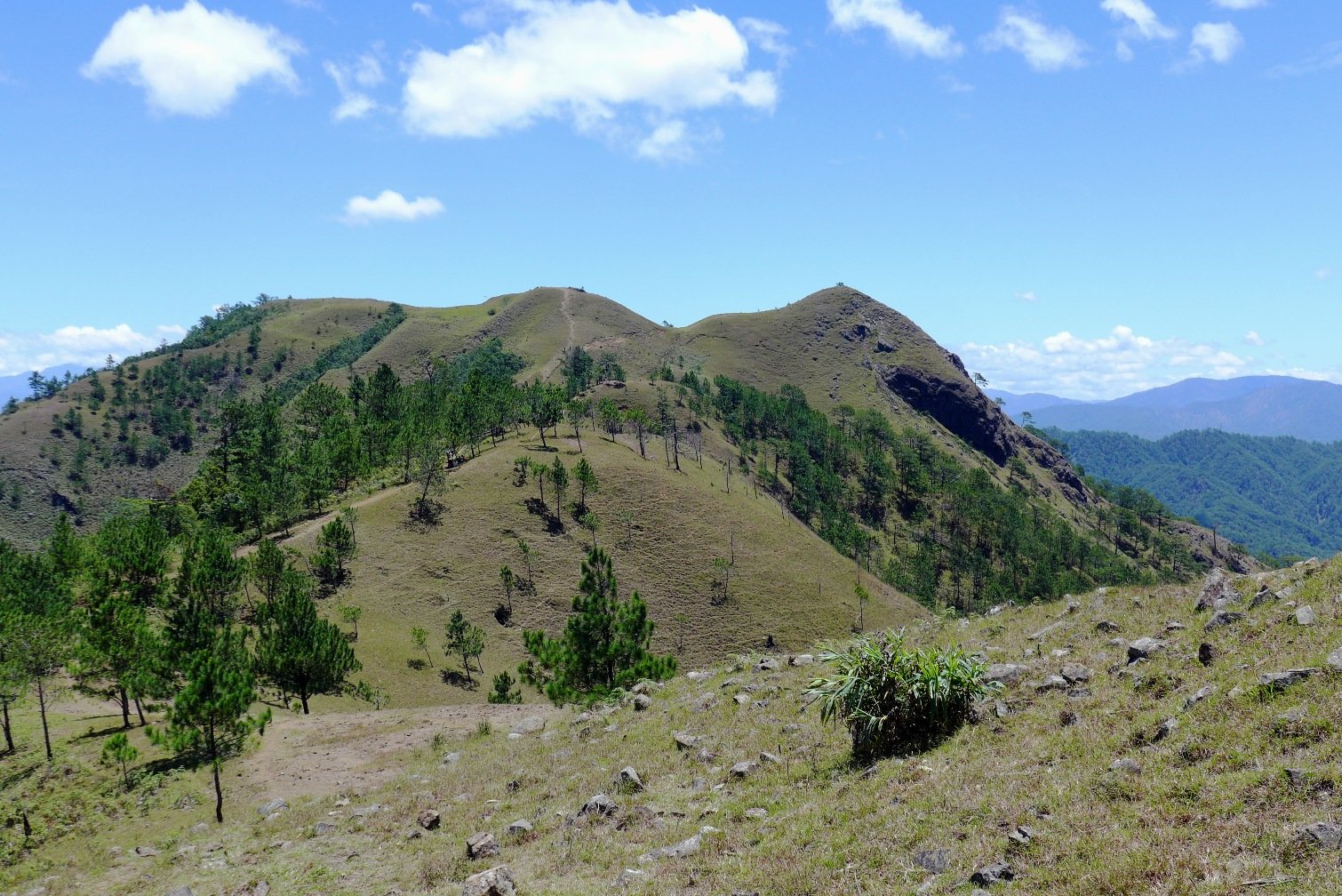 Rested from the previous day’s lazy exploration, we hailed a jeepney from the place we were staying at near Lourdes Grotto to Burnham Park. From there, we walked a few hundred meters past the Public Market, towards Baguio Center Mall, where jeepneys bound for Brgy. Ampucao where parked. Nearby was a branch of Jollibee, where we bought our lunch for the mountain.

An hour after the breezy yet dizzying ride, we finally arrived in Brgy. Ampucao, the jump-off point to Mt. Ulap. To our great surprise, a good number of hikers were already present, all queuing up to pay for environmental and guide fees.

We had the notion that not a lot of climbers would be around, owing to the upcoming elections the next day. Unfortunately, we were wrong. Everyone thought the same thing too. Hence, guides were scarce and every group had to wait for one to be available.

I was shocked to find out that our guide was a female teenager, a college student of the University of the Cordilleras. It was strange at first, but later on the trail, more teenage guides popped up. It turned out they were called to be of service, even if that day was supposedly their rest day, since too many people showed up that Sunday when almost no one was there on Saturday. I was lucky to be able to converse with her in Ilocano, and somehow I wish she felt comfortable with us too. So our trek began.

First, we had to walk on the highway to get to the actual start of the trek. Instantly, a concrete slope had to be managed – somewhat a warm-up for our poor calves and hearts. A map of our adventure was laid upon us right after. A tiny patch of tall grasses bordered around the Cordillera Mountains.

Soon enough, the pine trees were in view. Steeper slopes began. A lot of people were on the trail, but everyone had to be on a single file given the narrow walkways. It wasn’t easy to overtake or even to take a break, because sometimes there was hardly any ground to stand on.

We reached a small rest area – huge rocks precariously perched by the cliff. Behind it was the mountain range leading to Mt. Ugo. Continuing on our journey greatly reminded me of Mt. Ugo; its lush pine forest and the reddish brown soil were all reminiscent of the nearby mountain.

We proceeded to the other side of the mountain, this time overlooking the town of Tuba, Benguet. Shortly thereafter, a steep uphill climb followed, leading us to a seeming summit of a bald grassland. Rock sculptures adorned this otherwise empty peak, evidently left by all those who accomplished this trail.

From here, a series of ups and downs followed. A beautiful pine forest stood by the side of the mountain, a treat for those who had just finished a steep downhill trek. Cows grazed at the rocky but grassy terrain atop a hill. The midday sun was fast approaching, and so as an unknown species of insect that would pester us from here on out.

Finally, we reached what would be the highlight of our trek, the Gungal Rock that was the photo opportunity for many a traveler. The trek guides organized the sequence of photo-taking occasions on a first-come, first-served basis. Regrettably, the group ahead of us was so large that it took a while before our party had the chance.

But there was no way in hell I’d get on that sloping rock. One mistake and I’d be gone. Not worth the chance. To be honest, I am quite terrified of heights, that looking at the cliffs on the way back made me extremely dizzy.

Instead of doing a traverse, which was more difficult but quicker (according to our guide), we opted to return through the same way we previously passed. We heard one needed to climb down a certain cliff, more precipitous than the earlier downhill trek.

It took us about eight hours for the entire trek, which wasn’t too bad since we took the longer way and had lots of rest in between. We ended our climb with a celebratory meal at the foot of the mountain (or the beginning of the trek) with tons of fish balls and energy drinks.

On the way back to Baguio City, we split a jeepney with another group which came from the traverse. Our guide said the local government could arrange transport when necessary, but of course you’d have to pay for the entire jeepney once there were no other passengers.

Special thanks to Jo and Kris for patiently waiting for me during our descent!

A Short Note on Expenses

1. Bring food and lots of water. There’s no store on the trail! You can buy some at the Brgy. Hall or the jump-off point.

2. Slather some sunblock on, or wear protective clothing. It didn’t feel too hot while we were on the trail, but I got serious sunburn because I was too lazy to put sun block. Worse, the burn was uneven.

3. The trail is narrow. If you think two people won’t fit on that space, wait for your turn. I had too many encounters like this on the trail: I had already started crossing and the party from the other side still chose to get on, endangering both of us on a very narrow and steep area. Seriously folks, it doesn’t hurt to wait.

Enjoy the trail and happy trekking!