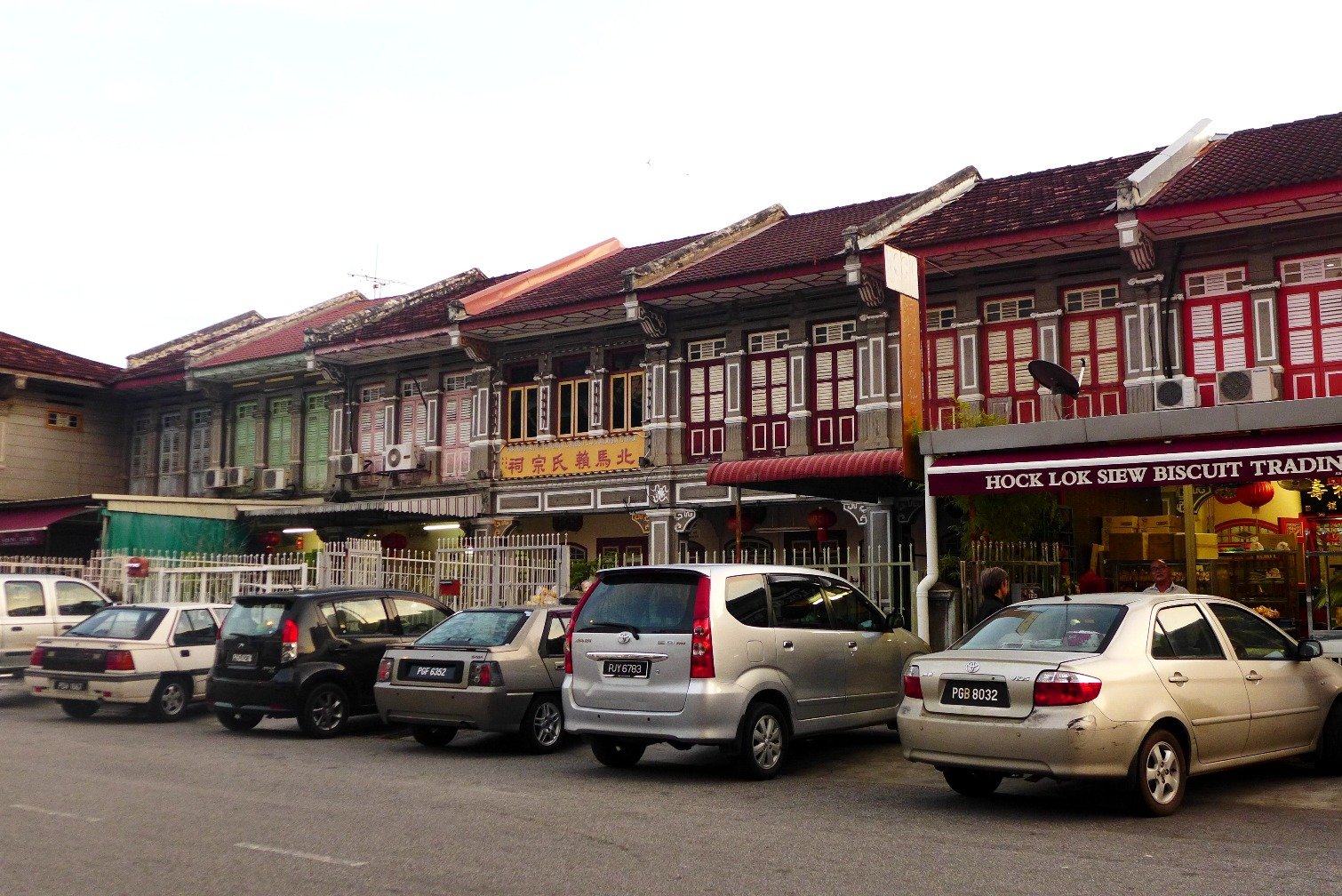 Following our morning trip to Bukit Bendera, we headed back to Georgetown to see more of the city. It was darn too hot to walk, unfortunately, so we opted to ride the free shuttle bus around town instead. Yes, there’s a free shuttle bus from Komtar that would take you around the most famous landmarks in Georgetown.

The bus traversed the entirety of Jalan Masjid Kapitan Keling, or the Harmony Street. Places of worship of different religions stood side-by-side, making me wonder why the same couldn’t thrive in the rest of the world. A few visitors stood at the gate of Kapitan Keling Mosque, undoubtedly smitten by its minimalist architecture. Some Nasi Kandar restaurants were open in the area, catering to Muslims after a visit to the mosque.

A few shops away, stalls were selling flowers and fruits for offering — a typical fare of Hindu worship. I wasn’t able to see the temple, as it was tucked away in a side street, but seeing rows of beautifully arranged flowers were enough to bring memories of India back to my mind.

On the next corner, hundreds of red lanterns were suspended in the air as the Buddhists await the upcoming Chinese New Year. Kids played on the empty square, feeding and chasing pigeons as if there was no tomorrow. The festivities of the Chinese clearly roared in Penang, where the Chinese dominate the Malays in number, a rarity in Malaysia.

But three were not enough. At the end of the street, a Christian church, the Church of St. George, stood. Its white façade and gothic tower were remarkable, set within a rather spacious piece of land.

The bus then turned at the roundabout, and a huge flock of students could be seen emerging from a school. A judiciary department was housed in a very beautiful colonial building. We got off at Fort Cornwallis, another landmark at Penang’s northern harbor. The Town Hall and the City Hall stood just across the empty field, with colonial Dutch influence evident in their structures.

A number of caucasians flocked the sidewalks. After all, just behind the nearby Queen Victoria Monument was the port where cruise ships docked. Locals, on the other hand, played basketball just by the entrance of Fort Cornwallis.

Two blocks south of Padang Kota Lama, the Pinang Peranakan Mansion revealed the history of mixed race culture. The strait settlements enabled interracial marriages to transpire and resulted in the birth of Peranakan heritage. A Chinese immigrant married to a Malay local would raise their children with open eyes to both heritage, and the confluence of such would later on emerge as a new subculture, Baba-Nyonya.

The Pinang Peranakan Mansion served as a perfect spot to witness Chinese and Malay ways co-existing in one household. The furnishings screamed of Chinese influence, with mother of pearl inlays in wooden furniture and ceramic vases obviously from China. Garments and footwear were largely from Malay origin, with the heavy use of batik and later on accompanied by embroidery. Food was also heavily influenced by Malaysian spices and curries, but Buddhism prevailed as the primary religion.

The great thing about visiting Pinang Peranakan Mansion was not only seeing a traditional Baba-Nyonya house, but also visiting a temple, a garment gallery and jewelry museum, all within the house complex. Beaded, woven and embroidered cloths and shoes were all on display. More astonishing though were the gold adornments that the Peranakans seemed never to get enough of.

Before calling it a day, we soaked more of Penang’s shophouse culture. Each street in Georgetown boasted rowhouses, whose ground floor used to serve as shops (they still do in some that we saw, but others were used just as houses or just as business establishments). The wooden doors and windows were ornately designed and were sometimes laden with a lot of gold. Their floor tiles, which extended to the sidewalks, had such pretty patterns that were a delight to the eyes. The unfortunate part in walking around Georgetown, though, was that you have to be careful not to fall into the open gutters.

It was clear how Georgetown was hailed as a world heritage site by UNESCO almost a decade ago — traditions kept until today, confluence of cultures, and a melting pot of religion.

But you have to go now. High-rise condominium buildings had began towering around town. You could only wish that progress wouldn’t go too far. After all, Georgetown gets its charm from the old world heritage it possesses.

Until next time… Happy travels! 🙂