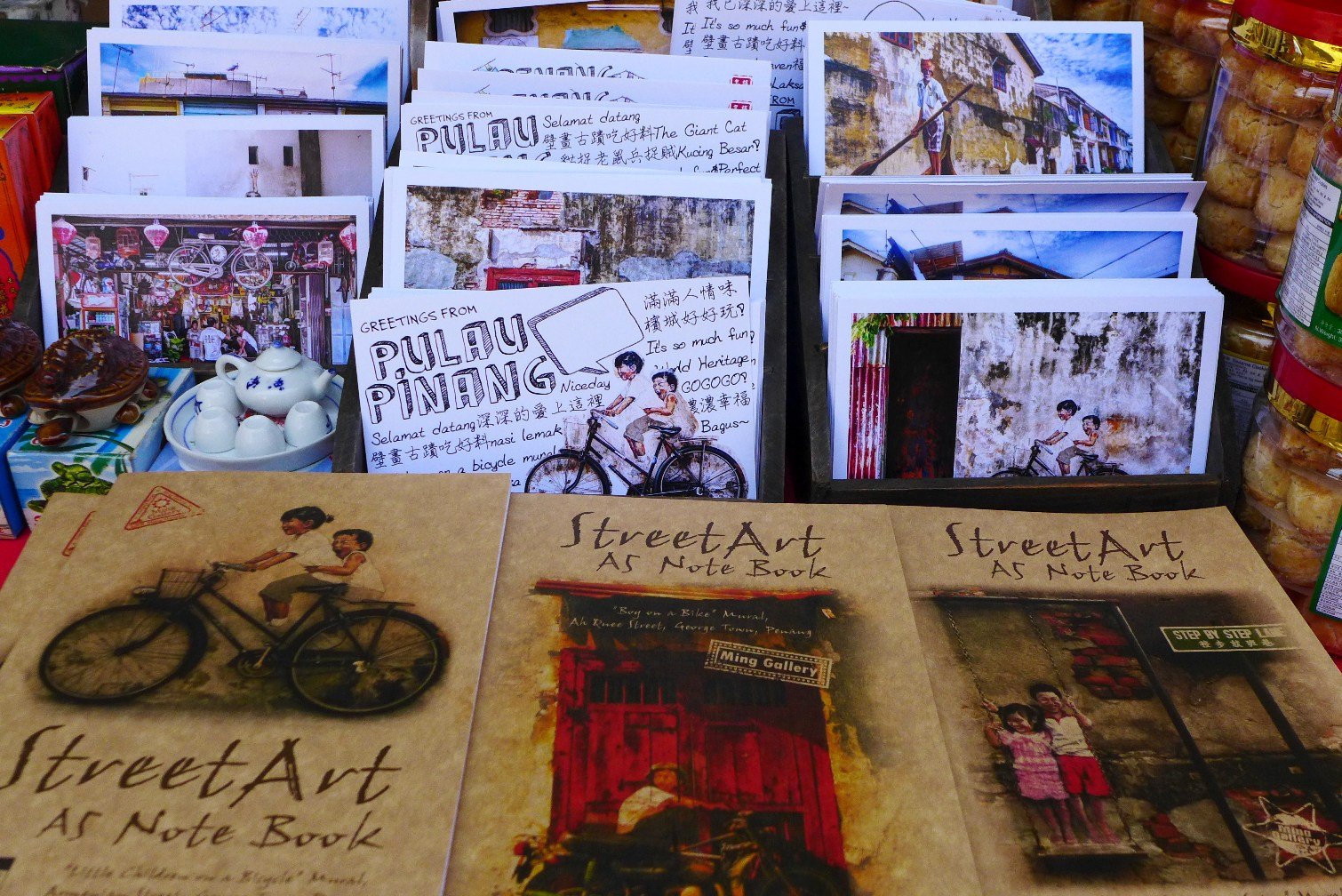 The sun was blazing hot when we were finally ready to explore the heart of historical Georgetown, the capital of Penang. Rows of centuries-old shophouses filled the streets, while a few visitors dared to walk in the heat. Shortly after lunch, we headed to Armenian Street, the street famous for Georgetown’s thriving art scene.

The beginning of Armenian Street was dead calm in the middle of the day. The Syed Alatas Mansion at the start of the road was closed for renovation. The Sun Yat Sen Mansion, though inviting, seemed empty. The street was devoid of visitors, but the roadsides were occupied by parked cars. It wasn’t until the corner of Armenian and Cannon Streets did we finally feel the energy — that buzz that makes any town or city in Southeast Asia truly Asian. Colorful umbrellas were stranded in the air, celebrating the forthcoming Chinese New Year. Red lanterns adorned the temple at the corner. 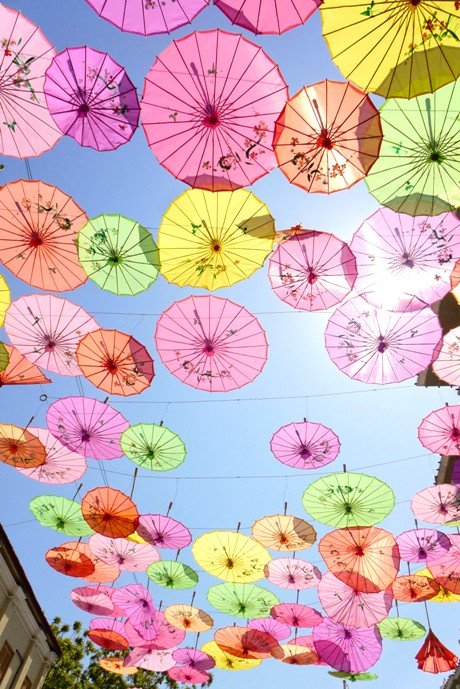 Before we got to walk in the busy side of Armenian Street, we made a short detour to Khoo Kongsi, a temple and house complex preserved by the Khoo clan. Reconstructed rowhouses lined the alley leading to the temple. The temple, however, was kept traditional. Wooden carvings occupied the pillars and walls, while gold sculptures were abound. An altar stood in the middle of the building, where the burning incense filled the air.

In the hall beside the main altar, name markers of the Khoo ancestors stood proudly. On the side, a few English words could be read, showing how successful the family members had become, not only in Malaysia but also across the globe. 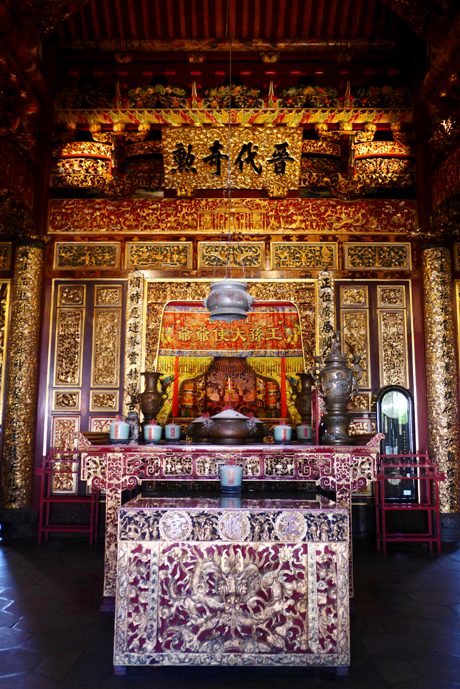 On the ground level, a small museum was opened for the visitors to understand the clan. Across the complex, a small outdoor theater was dead during the day, but was the venue of lively performance just the previous night.

Outside the Khoo Kongsi, I got my first glimpse of Georgetown’s murals. The Reaching Up mural stood across the temple’s main entrance. But a queue was formed by visitors waiting for their turns for a snapshot. The line was short, but I knew I would be embarrassed to pose in front of those impatient eyes.

We returned to Armenian Street, and started scouting for art in the area. Slowly, the murals unraveled in our eyes, but not without difficulty. It’s easy to miss out some, as we had to weave our way through passing pedestrians, raging cars and taxis, and hurrying trishaw peddlers. Souvenir items poured on the skimpy sidewalk, making navigating through the street more arduous than necessary. 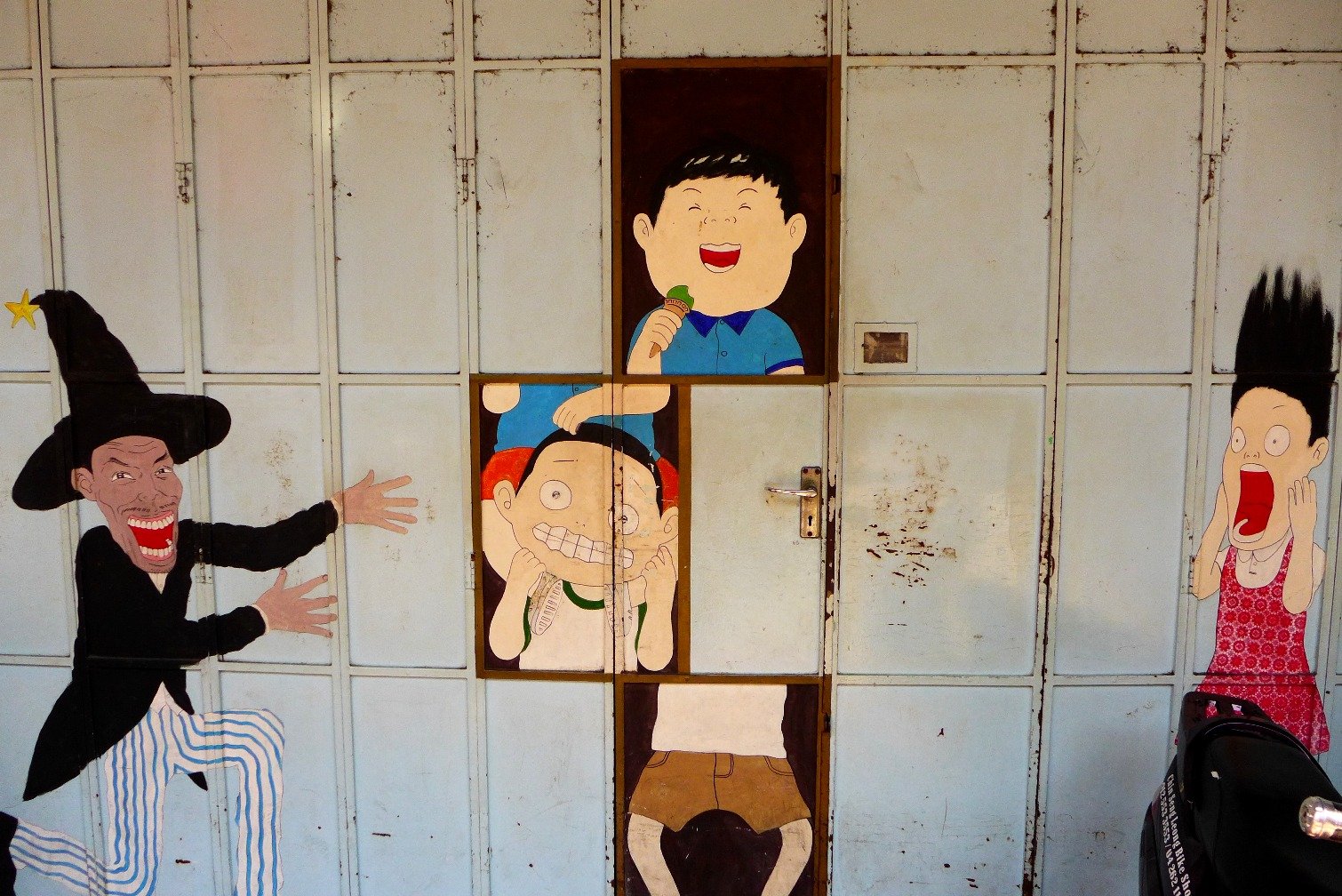 Snack items were sold on the street, most of which were geared to cool down visitors from the sweltering heat. Coffee houses were plenty, and a few handicrafts appeared interesting. Cheah Kongsi, another clan house and temple complex, was located just before Armenian Street intersected with Beach Street. Sadly, it was closed that day, but we got a short preview from the fence on the other street. Finally, the famous Kids on Bicycle came into view.

Just like the first famous mural, there were a lot of spectators around the artwork. The beauty of these art pieces by Ernest Zacharevic was that the otherwise flat mural was made alive by incorporating a 3D object to set the scene. Visitors were then able to interact with the art and grab photos of themselves as though they were part of the artwork in the first place.

Too shy for a pose, we then made a left turn and had early snack at China House. More on this on a later post.

Other artworks in the area

We made another left turn towards Lebuh Ah Quee and were met by the Boy on a Bike. I had a quick photo (there was finally no crowd!) along with the artwork, just before a flock of teenagers began snapping photos of their own.

A portrait of a football player was painted right in front of the famous artwork, and a few more could be seen in this area. Just before reaching Kapitan Keling Mosque, we made another left towards Lorong Soo Hong to see a few more murals.

In addition to the murals, we were on the lookout for some iron works. Boasting local life and culture as its theme, it was especially entertaining to read the captions embedded on the handiwork. 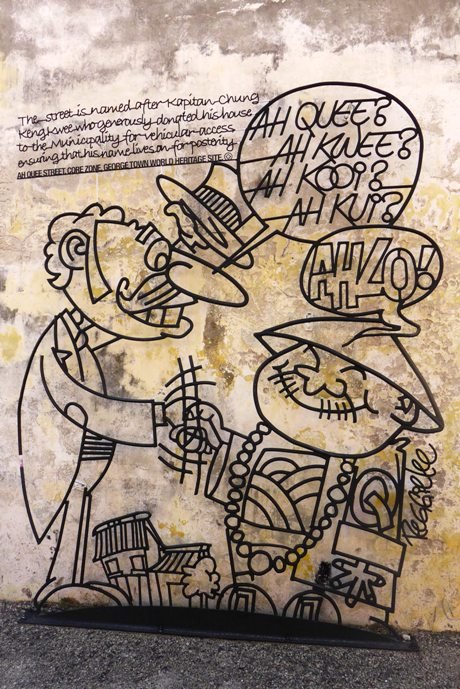 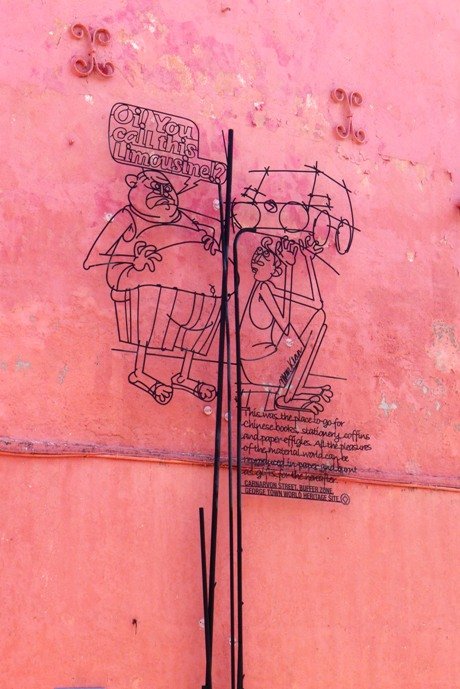 If not for the sweltering heat, we would have gone straight to Jalan Masjid Kapitan Keling. Unfortunately, it was horribly hot. We made our way back to the hotel instead, and rested while the sun continued to unleash its fury.