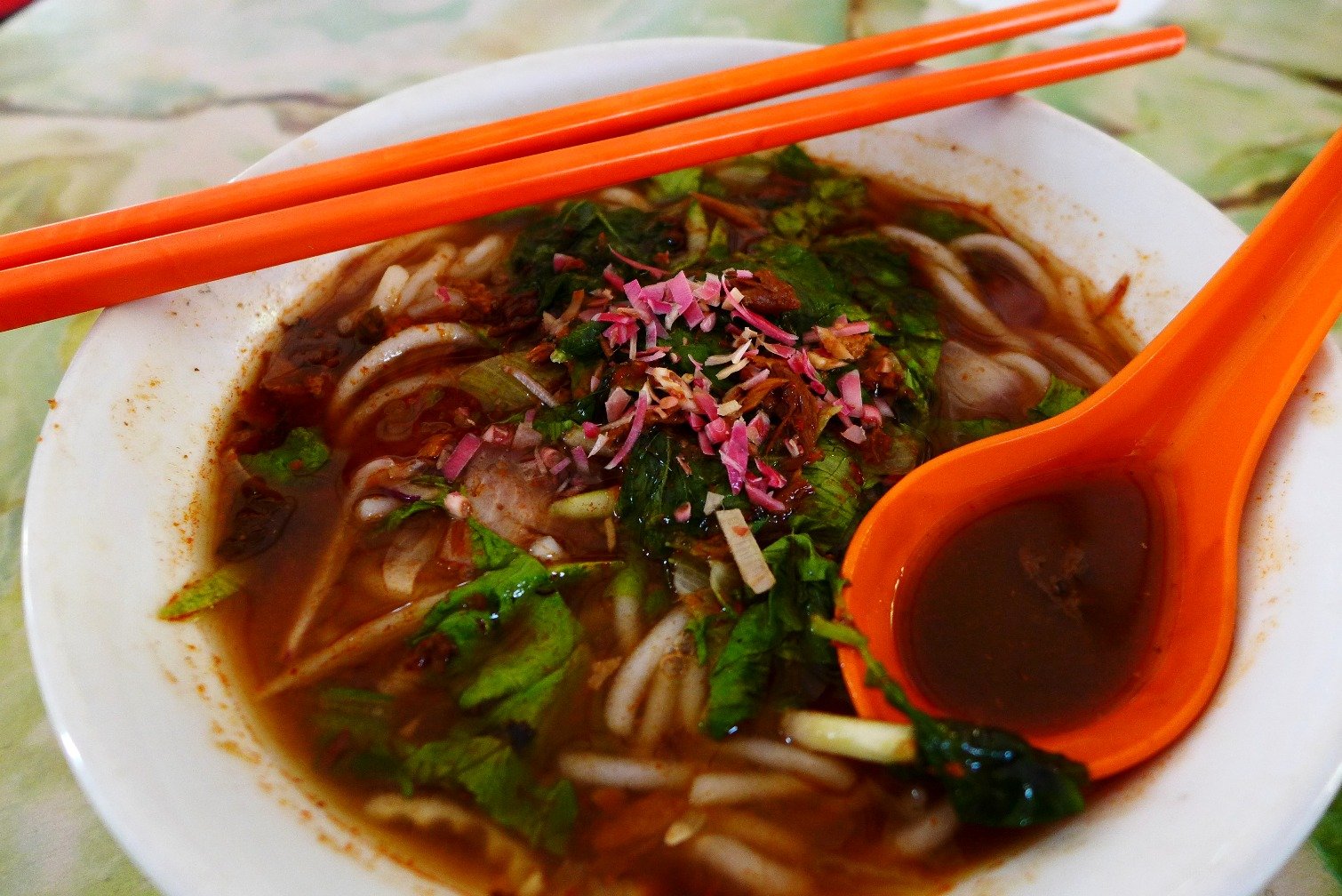 But really, what is Penang without the food?

You can’t go to Penang and not sample their street food. Yes, it has become a little touristy, but it’s still a great experience.

Unless the food stall is located along the street, you have to learn a little about coffee shop culture in Penang. Upon entering a traditional coffee shop, a server will ask you for your minum (drink), because only by ordering a drink will you have the right to sit down. The food stalls don’t own the place, so if you want to eat on a table, pay for a drink. If you don’t order a drink, they will charge you!

Now that you have a table, order some food. Point where you are seated (or say your table number if there’s one), and they will bring your food to your table. Only then will you have to pay up.

It was the first coffee shop we ate at, so we were a little unsure of how things go. The uncles and aunties who run the place were all patient, though. We ordered from each of the food stalls – Char Kway Teow, Hokkien Prawn Mee and Lobak.

My untrained palate for Malaysian food found the Hokkien Prawn Mee delicious. As expected, the soup was full of shrimp flavor. Our thorough enjoyment was evidenced by an order of another bowl. The Kway Teow, on the other hand, was a lot less thrilling to my taste. The noodles were chewy, not too salty, yet the inclusion of duck egg yielded an indescribable taste, which although not bad, didn’t give me a great balance of flavors.

I was a newbie to the Lobak, so I didn’t know what to expect. It was crunchy and flavorful, a nice accompaniment to a plate or bowl of noodles.

Drawing away from the typical kedai kopi in Penang, this coffee shop is more of a restaurant-cafe. Get a table, order food from a waiter and you would be served. Pay after you eat. It was the only boutique coffee shop we tried and we were disappointed.

The truth was that I was expecting too much. I had read reviews raving about the ambiance, the table full of pastries and cakes and the food. True enough, I liked the ambiance: an old shophouse converted into a cafe, a restaurant and a bar downstairs, and an art gallery and a craft store on the upper level. I liked how it reeked of the old world, but was buzzing with people from all over the planet.

The service? Contrary to what I’ve read where some claim that the staff were rude, the crew when I went were amazing. They gave us a table at once, catered to our questions no matter how busy they seemed to be and attended to us when we were ready to pay. I couldn’t ask for more.

The food wasn’t spectacular. Seriously, i was let down. I tried both their best-seller cakes — the tiramisu and caramel cheesecake, both of which I found underwhelming. The most delicious of the three we tried was the coffee cake. Their coffee was also our least favorite in all Penang. I could only hope that their savory dishes fared much better.

Don’t let the name confuse you. It’s not exactly a hawker center but a street where food carts were abound. Opened only at night, the place was half-empty by the time we got there just before sunset. Here was where you could try a very wide variety of Malay food.

The disappointment was the Koay Teow Th’ng. I knew it was to be mildly flavored, but it was close to being tasteless.

The popiah reminded me of lumpiang ubod, while I found the lobak better than that in Ping Hooi. The winners proved to be the Curry Mee, whose curry flavor and spice level were just enough to my liking, and the oyster omelette, which was light and fluffy and full of oyster goodness.

It was a gem we found in Air Itam. We were hungry by the time we arrived early morning, and this clean, somewhat new coffee shop offered really good food and drinks! The Char Kway Teow amd Nasi Goreng stand offered dishes with such great flavor and texture. Auntie really knew what she was doing. Their coffee was also superb.

We came back for lunch and I tried their Assam Laksa. It’s a sour and spicy soup, but I didn’t find it to my liking. It was fun, however, to watch the lady prepare the broth right there. Try the sugarcane juice! It’s a wonderful way to cool down from the downhill hike from the Kek Lok Si Temple.

I tried the hazelnut coffee, which was good.

Knowing this was our last snack, we also tried the cendol here. The coconut milk permeates through the crushed ice, rendering it so much more flavor than expected. The gelatin-like green stuff was off-putting in color, but was balanced in flavor by the red beans and coconut milk ice. We really enjoyed this ice cold snack.

I’ve been waiting for a long, long time to satisfy my Indian food craving, and boy did this nasi kandar restaurant satisfy it. Get close to the dish stand and point whatever appealed to you and it would be served at your table. Typically, this consists of some sort of curry and a vegetable. I ordered a chicken korma (presumably) and sautéed overcooked cabbage. The korma was the mildest flavored dish with an Indian origin that I’ve ever ordered in my life. I wasn’t in the mood for some fiery red curry, unlike my brother who was ready for spicy food. The korma, though not spicy, was flavorful nonetheless. Hints of cinnamon and cardamom were all present in this creamy dish.

Still craving for food, I ordered roti canai, which was served with dahl. Confession: I loved dahl because it was the closest thing to a Filipino dish I had when I was in India (it was like monggo or mung beans), a respite from all the spicy food I was eating then.

Just before we walked away, our eyes caught a poppadom in view and ordered one for take out. It was indeed an Indian feast.

What I’ll come back for

Penang is such a great foodie destination. I’ll definitely come back for the food — that Hokkien Mee in Ping Hooi, the Curry Mee and Oyster Omelette in New Lane, Kassim Nasi Kandar, Kway Teow and sugarcane juice in Air Itam. Of course, there are more traditional coffee shops to try, more noodle dishes, dim sum, Indian food and Peranakan food. I can’t wait to be back!