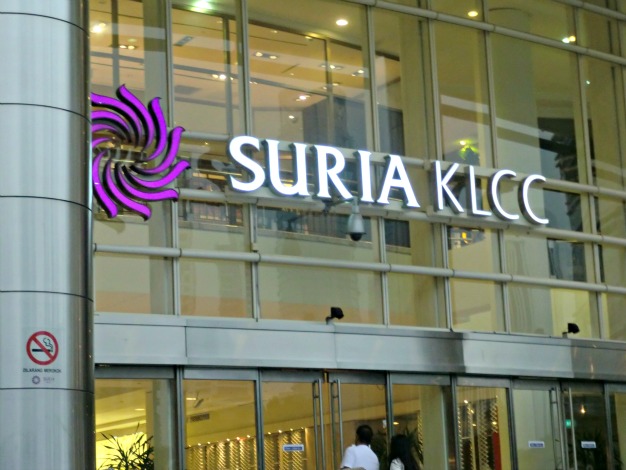 Connecting Aquaria KLCC and  Suria KLCC is a wide, brightly-lit pedestrian underpass. Suria KLCC is a mall located below the Petronas Twin Towers. In fact, when you’re inside the mall, you can actually see the twin towers on top–even better at night when the towers are already lit. Locals and foreigners alike frequent this mall not only for shopping but also for entertainment. We proceeded to this place from Aquaria KLCC to grab a bite before heading to the airport, and to see the Petronas Twin Towers too.

After dinner, we headed to the front of the mall, where the KLCC Park was located. There used to be a fountain here, in front of which locals sat and watched how the water danced. Unfortunately, the fountain was closed for maintenance, but still the same, locals were gathered and were taking their time to relax. On the other hand, tourists were busy taking snapshots of the famous twin towers. I was one of them. Though it’s my third time in KL, I never had a perfect photo of the twin towers. I was determined to get one this time. Not long after my brother and I started taking photos, it started to drizzle. Oh no, not again, I thought. We managed to get few shots then went to the front of the towers where the full front of the buildings can be seen (Note: the front of the mall is the back of the towers).

This was where I really wanted to get a perfect shot. I loved looking at the twin towers from here, especially at night. I feel like a dwarf standing below these two giant buildings. Reality check: we were too near the towers to get them in just one photo. One of cameras was panoramic, but it still wasn’t able to capture the towers in one good shot, and we don’t have a DSLR camera. Oh well, my mission to get that perfect shot of the towers failed. Still, I loved how the twin towers made me feel as though I’m witnessing something spectacular, something so grand, something so beautiful.

Then the rain started to pour. We ran to the train station to catch the train to KL Sentral. This time around we’re sure that we were no longer taking the taxi to the airport. We’re going to try the KLIA Transit* instead. I was thrilled to actually try commuting to the airport. This would be the first time that we would not hail a taxi or rent a car to get there. We needed to ride from KLCC to KL Sentral, via the Kelana Jaya Line. Though not my first time to ride the light rail train in KL, it was the first time past the Pasar Seni station (the station we get down when we wanted to go to Central Market). KL Sentral was busy–not really with people, but with the abundance of commercial stalls present in the place. Thankfully, it had very good signs pointing you to which direction you should go. We easily found the Ticket Counter and bought KLIA Transit tickets for only RM 12.50 each (really, really cheap).

The ticket was comprised of two parts: the first one was for the train from KL Sentral to Salak Tinggi station, and the second one was for the bus from Salak Tinggi station to the budget terminal. It was a very comfortable ride, quite faster than taking the highway by taxi, so we were able to reach the airport earlier than expected. We drank coffee from Old Town then we were set to go to our next destination: Jakarta.

*If you are heading to the main airport terminal, you will have to take the KLIA Ekspres train for RM 35 where you’ll take just the train from KL Sentral to KLIA. No more bus rides.

6 thoughts on “A Stopover in KL: Petronas Twin Towers and KLCC Park”