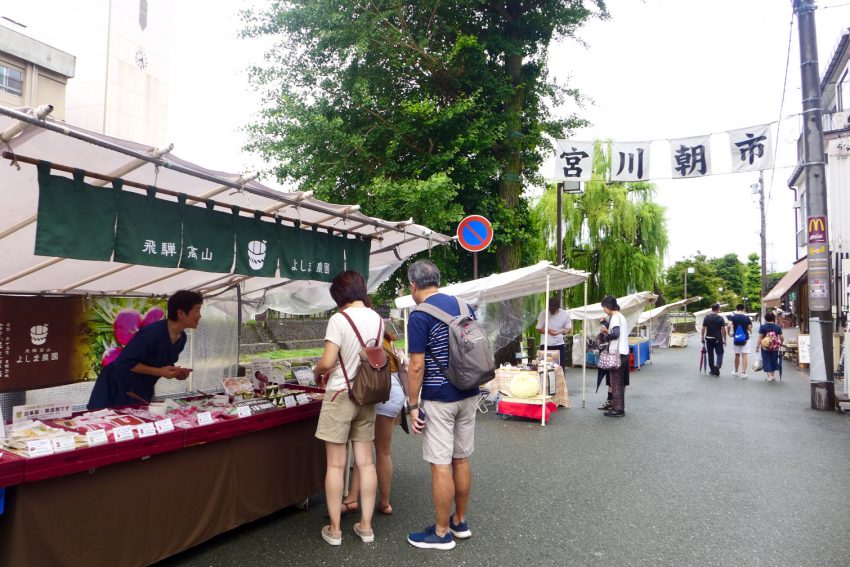 It was damp the morning after our arrival in Takayama. It was no longer pouring heavily, but it was visible that it had not stopped raining. The summer showers were here to stay, so we only had to make do with what we can. Cooped up in our hotel, we opted to buy breakfast from the convenience store downstairs to pass the time. Some time later, we caught a break: the rain finally stopped.

Early in the morning, most of the shops were still closed, but some attendants were already setting up shop. Cleanliness was truly at the core of Japanese life, evidenced by the vigorous scrubbing performed by the shopkeepers on the floors of the covered walkways. Yes, Takayama’s center had covered pathways, which shielded us from getting wet at this time of year, but they were probably built to protect residents and visitors from snow in winter time. Hydrangeas bloomed on the curbside, while crafts made from wood could be seen everywhere. A pagoda stood close to an intersection, while another shrine was erected in the middle of the commercial district. In no time, the sound of rushing water could be heard: the Miyagawa River was close by.

On the banks of the river stood a humble morning market. The weather cooperated at this point, allowing us to wander fearlessly. The market was relatively empty: only a few stalls were set up because of the earlier downpour. Visitors were pretty much non-existent because of the unpredictable weather.

Fresh produce was the main attraction–fruits, vegetables, flowers and even honey. Preserved foods were also present, from pickles to homemade jams to even dried fish. Souvenir shops were packed with many trinkets that graced many a traveler’s suitcase. The vendors were friendly, smiling most of the time, yet were not pushy as was typically Japanese. Sarubobo dolls, a lucky charm in Takayama, were displayed everywhere. An older lady was even knitting one while passing the time in her stall; watching her was an experience itself.

Snacks and sweets were plenty, and the stores placed many samples for tourists to try. Prepared food were also sold, from Western-style bread to steamed buns filled with Hida beef. Skewers of cubed Hida beef were also grilled and offered for sale. We were unfortunately full from the convenience store breakfast we had earlier, so we couldn’t fully immerse ourselves in all the gastronomic treats on offer. We only opted to try the marshmallow cube confection. It was eggier than a regular marshmallow…but apart from its unusual shape, I was not exactly a fan. The exterior was quite crisp, but the savory egg flavor didn’t go too well with the sweet fluffy meringue interior, at least for my taste.

Optimistic about the weather, it was time to say goodbye to the morning market and head to Takayama’s famed set of streets: Sanmachi Suji. As we made our way there, more visitors seemed to be pouring into the market. I could only wish we could have seen more stalls open, but that in itself was being greedy. In the first place, I never really expected we’d have the time to see this morning market, so I was more than happy that we had been able to.

Sanmachi Suji will be up soon. Until then, happy (virtual) travels!