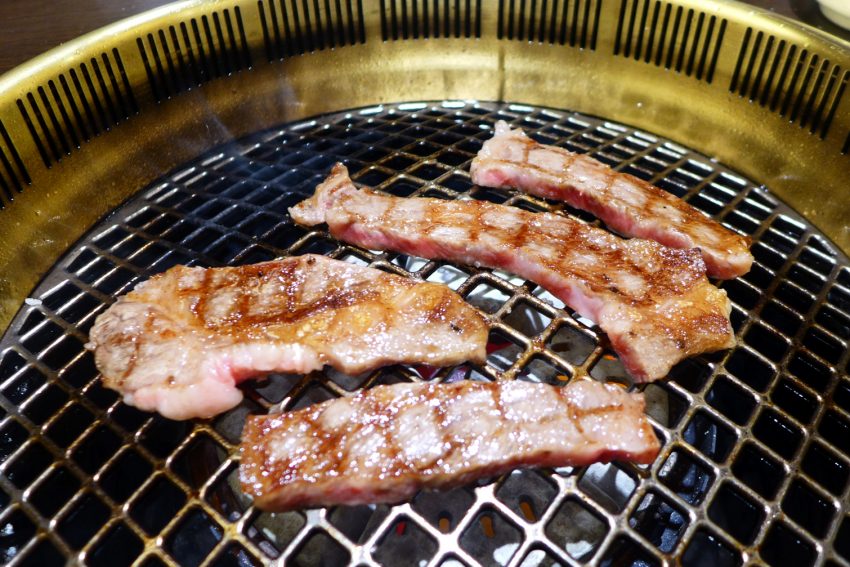 Over the course of researching what to do in Takayama, eating Hida beef, the region’s famed wagyu, was one of the top results. I never thought that we would be able to sample this Japanese beef multiple times over our short stay in Takayama, but some of these dining experiences were priceless.

The pouring rain did not stop us from heading to this meat shop slash restaurant. Our dinner on arrival was the only possible time for us to enjoy a Hida Beef meal. Good thing the store was still open by the time we arrived.

Though the restaurant served the beef in various ways, we chose to have ours yakiniku style. A5 Hida beef was our choice, which came in four cuts: sirloin steak, round steak, chuck roll and diced steak. The meat came quickly, and we started this memorable gastronomic experience.

The heat from the grill was truly high, searing the meat quickly while preserving the rarity of the meat even though they were sliced quite thinly. As a home cook, I also was amazed by the sheer power of the exhaust around the grill, which sucked all the smoke just a few inches off the grill top.

Cooking tableside, we had the option to pull the meat out as soon as we deemed them ready. As the cooked beef slice entered my mouth, a very flavorful bite ensued. The meat was so tender that it was aptly dubbed as melting in one’s mouth. The diced steak was especially “melty”, as it was thicker in cut so there was more wiggle room for a rarer steak.

It was a meal where one wonderful bite was followed by another; as my first wagyu experience, it was truly mind-blowing. The quality of the beef more than compensated for the limited quantity that we ate — perhaps it was reflective of the Japanese culture that quality trumped over quantity. Yes, it was a bit pricey, but it was worth the money…the next question was, would Kobe beef beat Hida beef? We’d find out soon enough.

The culinary adventure began with the organized queue, snaking inside a souvenir shop. The excitement heightened as your turn drew nearer; it didn’t help that most of my fellow customers were teenagers with gleeful voices as they shared stories with each other. The line moved a bit slowly but systematically. Soon, it was our turn.

Instantly, you’d recognize why there was a queue. The chef prepared the beef slices as they were ordered; torching them professionally so that nothing was charred, just caramelized enough but still very rare at its core. We ordered Set C, where three different kinds of sushi were available: ginger soy sauce, salt and a gunkan. Of the three, I had very little expectations of the gunkan one, as it had a raw quail egg sitting on top of the meat.

To my surprise, it was actually the gunkan that captured my taste buds. The raw quail egg provided such creaminess to the bite, but it did not overpower the beef. It was so wonderfully balanced that I could see myself having the same thing over and over again, except that it was quite an expensive ordeal and the extensive lines weren’t exactly my cup of tea. The two other sushi bites were fine, but they were not as unforgettable as the gunkan one.

Close to the Hida beef sushi store was a shop selling Hida beef buns, and since it was considered to be one of the must-eats in Takayama, we decided to indulge on it too. I ordered one ‘karai’, meaning spicy, and another ‘not spicy’, forcing to use English because I didn’t know the translation. ‘Karakunai’, the old lady told me. ‘Karakunai’, I repeated. She smiled. She must have recognized my attempt in speaking her language, and perhaps she appreciated it, even nudging her husband as both of them smiled at me. We took a spot near the miniature float that their shop housed, and admired it carefully as we munched on the beef bun.

Unfortunately, it paled in comparison to the previous experience of the Hida beef gunkan: the meaty flavor was not as prominent. The more famous Kihachirou brand was just across the street, which I missed. The language lesson was priceless, however, making it still a memorable experience…as I will never forget how to say not spicy in Japanese again.

I could only hope to gain more Hida beef adventures in the future. That Hida beef yakiniku set the bar for all my future grilled beef dishes. I don’t know whether something will ever beat that memory, but it will surely linger as my top choice for a long time.

So when you go visit Takayama, don’t forget to grab the opportunity to savor some flavorful meat. It was surely worth the splurge.

Until our next destination, happy (virtual) travels!