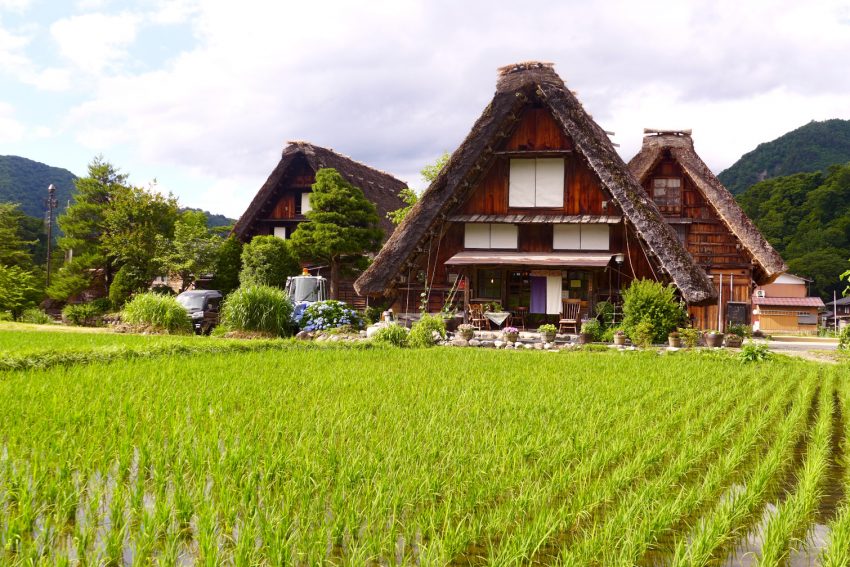 From the Ogimachi Observatory, it was an easy trek down to the cluster of houses that made this village famous. The houses slowly got bigger as we made our descent, as if zooming in on the beautiful vista from a telephoto lens.

The houses looked small from the view deck, but it was quickly proven wrong as we got closer to one. The roof alone was mightily huge, almost a foot thick and spanned several stories high, dwarfing the walls that it was protecting. The thatched roofs were angled very steeply due to the snow that falls during winter each year, resembling prayer hands from which houses got their name: gasshozukuri.

The truth was that I had very little planned while we were here, except to walk around town. The roads were paved making it an easy stroll. The fields were not yet fully green as the planting season began barely a month ago, but the sprouting planted rice added another appeal to this tiny village. The surrounding mountains provided a beautiful backdrop to this already gorgeous place, and there was no denying that we spent a lot of time taking photos of the scenery and the interesting things around.

One thing I wanted to do, which we managed to, was to visit one of these gassho-zukuri houses. I opted for Kanda house knowing that its central location provided a vantage point like no other. My parents opted out of this, as they were quite exhausted from the walking and the short trek. It was only my brother and I who ventured in, and we were quickly greeted by the staff. A kettle on the central room was lit by wood, and the fumes permeated through the ground floor. We roamed around this floor, enjoying the tatami mat floors and the view of the garden outside.

After a quick glance at the main level, we headed upstairs. Implements of their agricultural industry took most of the floor space. It was quite dark on this story, with only the windows lending light to the massive room. The underbelly of the thatched roofs could be seen here, and it was mesmerizing to realize how much work these famous roofs entailed. Ascending to the next level meant climbing a ladder, whose rungs were a bit too high for me. I managed to go up, and there was barely anyone on this floor. The level below could be seen from the screened spaces on the floor and the smell of smoke reached up to this third floor. Another level up meant another challenging ladder, but getting on the top floor was very much worth it.

The gassho-zukuri houses were very close, and it was truly picturesque to see them from this angle. The few visitors who were on this level had made their way down, leaving the entire floor to ourselves during our visit, making it truly a remarkable experience. The only annoyance came from the outside, where a group of tourists were speaking in too loud voices that could be heard even on the top floor, negating the quietude that was ever magnified in the countryside.

We returned to the main floor and joined our parents, who enjoyed the garden especially with the koi swimming in the pond. We strolled a bit more around the village, but we failed to see the interior of Myozenji Temple, though we caught a glimpse of its bell tower from the outside. We also failed to visit the river running through the town as my parents’ energy was too depleted at this time. We returned to the bus station to wait for our bus to Kanazawa, from where we would catch the train back to Kyoto. While waiting at the station, a very informative film was on loop, showing how the thatching of the roof was being done, the various appeals of the village throughout the seasons, and the rice planting festival that takes place at the end of May.

It was a long trip back to Kyoto, but this side-trip to Central Japan was very much worth it. Happy (virtual) travels!