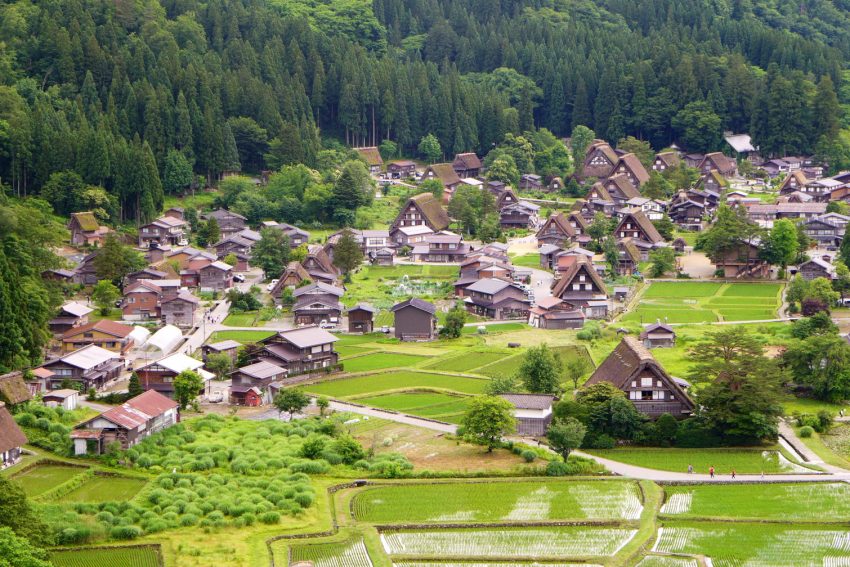 Our side trip to Kanazawa and the Japanese Alps all stemmed from one thing: my desire to visit the village of Shirakawa-go. Its winter scene of snow-capped roofs and light emanating from screened windows would have been a sight to behold, but it was summer when we visited. Even without the famous night illumination, Shirakawa-go remained to be a very picturesque sight.

We left Takayama shortly after our quick lunch of ramen. The bus left on time, as expected of the Japanese. What surprised me though was the smoothness of the ride. You see, I get motion sick easily, especially when riding small vehicles, buses and sea vessels, so this was the part of the trip that I was looking forward to the least. But, Japanese buses were a class of their own. The bus glided so smoothly along the roads, a lot more serene than the train we took from Kyoto to Kanazawa, and, at least to me, almost mimicking a shinkansen ride.

The views during our journey were also attractive. Sure, they weren’t as impressive as the ones we had on the Hida Wide View Limited Express from Toyama to Takayama, but they were still striking on their own. More gorges and mountains and forests laid before our eyes, and sometimes the bus even got through tunnels in the mountains. It took less than an hour to get from Takayama to Shirakawa-go, but the scenery made the ride feel so much shorter than it actually was.

Upon arrival, we first had to deposit our bags at the train station. Following this, we were ready to get to the viewpoint, which was serviced by a regular shuttle. By the time we arrived at the waiting stand, there were already enough people to get on the first shuttle to arrive, meaning we had to wait for quite a while before we got our chance. We didn’t want to roam around the village first because it might mean losing our spot on the next shuttle, and my parents definitely didn’t want to walk all the way up.

Finally, it was time for us to get to the observation deck. Arriving later meant that the whole area was filled with our fellow passengers from the bus in Takayama along with our fellow riders in the shuttle. However, we waited patiently as we drank peach teas from the vending machine, and it didn’t take long before the entire place was almost vacant. The view was finally ours to admire, and for the first time, I was to take in the breathtaking vista of a village with prayer-hands roofs set in the middle of the mountains.

The sight was beautiful to behold, although standing there and seeing it in real life felt like the lenses of my eyes were zoomed out compared to the photos I had seen. One annoying thing was that the central portion of the deck was restricted to being a paid-only spot where someone would take your photo. I would much rather appreciate paying for an entrance fee than have someone “professionally” take my photo.

Nonetheless, it was a great photo spot. We took all the time taking photos because there was almost no one around anymore (they had all gone down), until the next batch of shuttle riders arrived. We trekked the way down the paved slope, which was quite fantastic as this meant the houses became bigger and bigger as we grew closer to the village.

More on walking around Shirakawa-go on my next post. Happy (virtual) travels!