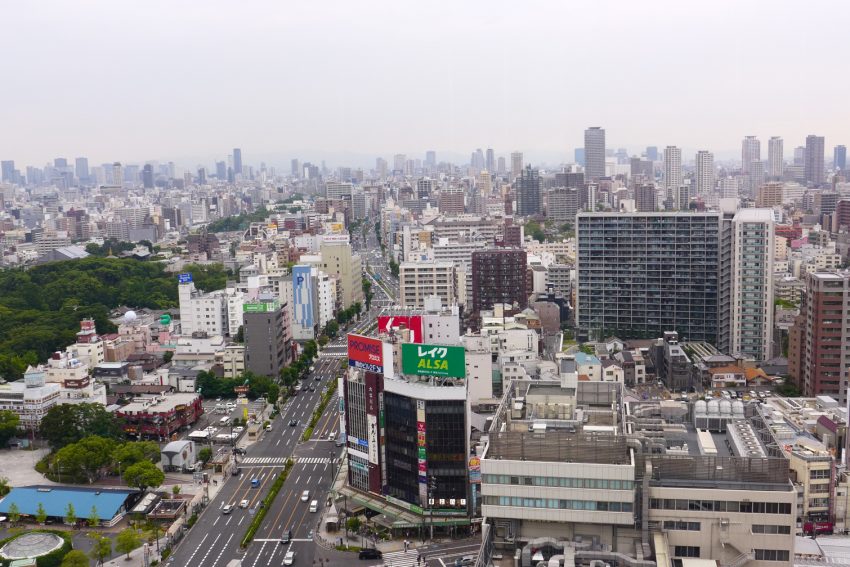 The sashimi slices we indulged in Kuromon Ichiba weren’t enough to tide us over until dinner, so we had to grab a more filling meal before moving on our Osaka itinerary. One station away from market was the district of Dotonbori, and around this area was a famous restaurant serving okonomiyaki, the savory pancake distinctly from Osaka. We had to look for Ajinoya, where I once read as having some of the best okonomiyaki in town.

A little store located on the alleyway towards the district’s neon billboards was Ajinoya. We later found out that we spotted the takeout counter or its 2nd shop, but we were able to dine inside anyway. It was fun to watch the cook as he prepared our orders of okonomiyaki, though it was quite a feat as you had to hover before the cook, in front of a glass guard. I guess that would have been the allure of the main store, where you could sit by the counter and watch these savory pancakes being prepared without any hindrance. The staff seemed friendly enough to let us marvel at their cooking, even if the aisle was quite tight. Of course, all the spectacle came to an end as soon as another customer walked in, as it would have been quite rude to stand in their way (yes, the aisle was that cramped).

True to its fame, these pancakes did not disappoint. I had only tried okonomiyaki once before, and these were so much better than what I remembered. We had a few kinds of okonomiyaki, but nothing stood out as the better than the other, or perhaps they were all good. We even had a Hiroshima-style one, wherein soba noodles were stacked on top of the pancake. As if the carbohydrates weren’t enough, we also indulged in some yakisoba. All in all, it was a great meal, especially at their prices in this area.

We headed to the main attraction of Dotonbori: the neon billboards overlooking the canal. In a scene where people were everywhere, the Glico man still took the spotlight. I honestly preferred the billboards at night, where they seemed a lot more striking and garnered more interest. Yet, I guess the draw of an afternoon visit would be to watch the cacophony of people roaming around — truly people from all walks of life gathered here. With our bellies full, we could no longer indulge in more Osaka street food. For most visitors, takoyaki was a popular choice, and people even queued up for them. A famous kushikatsu restaurant could also be found in this commercial strip, as well as other restaurants serving classic Japanese treats.

Having had enough of the crowds, we found respite in Abeno Harukas, a skyscraper in the city. We initially planned on getting to the building’s observatory, Harukas 300, but later changed our minds. As we stepped out of the elevator on the 16th floor, we were immediately attracted to the outdoor garden. We wanted to get some rest prior to visiting the top floors as we were beginning to feel tired, but we soon realized that a marvelous view already stood before us. Though the top floor view meant we could see farther out, we could see the surrounding area in greater detail at this height. The vending machine beside the benches was a bonus, so we quenched our thirst while taking the vista in.

Exhausted, we finally decided to skip the observatory and head back to Kyoto instead. We’d have to see the observatory at another time. Since Tennoji Station was at its underground, it was a short ride to the former capital on the Haruka train…though my legs were too tired at this time that standing on the train throughout the entire journey felt longer than it was.