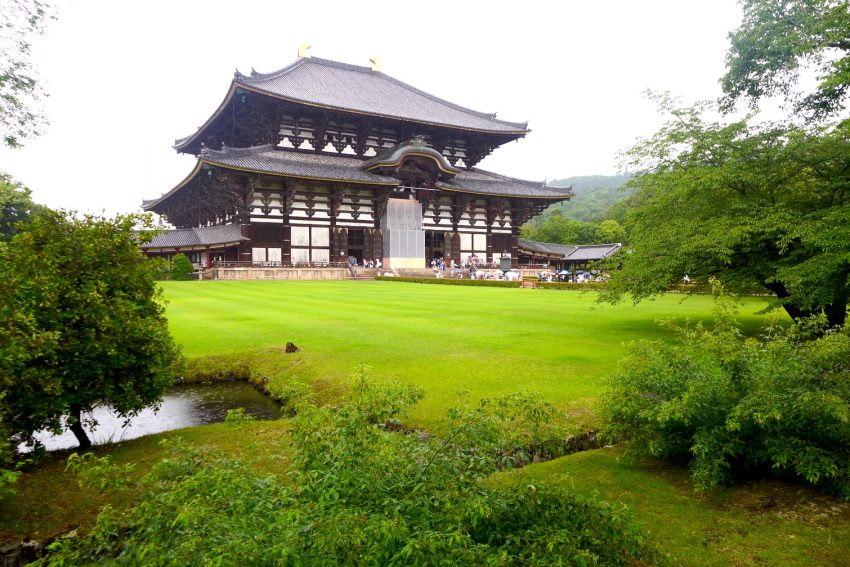 From Kyoto’s Inari Station, it almost took an hour to get to Nara. It was pouring by the time we arrived in Nara Station. Not wanting to get drenched from the rain, we whiled ourselves in a 100-yen shop located at the station. Seria had a lot of knick-knacks that interested us, and we even got hold of some transparent umbrellas often used in Japan’s rainy weather. Finally, we had a weapon against the downpour. Before leaving the station, we got ourselves some kakinoha-zushi, or sushi wrapped in persimmon leaf. We tried the salmon and mackerel variants. My brother quickly exclaimed that the mackerel one was so similar with my mother’s paksiw, a Filipino dish of fish simmered in ginger and vinegar. As usual, my favorite remained to be the salmon one. Off to Todaiji!

“Todaiji ma-de, onegaishimasu”, I told the taxi driver. He acknowledged and began talking quite fast in Japanese. I had no idea what he was talking about, and he seemed not to realize that I couldn’t speak Japanese fluently either, until he looked behind and saw that we were not his countrymen. He verified that we were headed to Todaiji, the most famous attraction in Nara. In an atypical Japanese fashion, he was unreserved in striking a conversation, even in the little English he knew. “Bambi, bambi”, he began exclaiming. At first I though he was uttering another Japanese phrase I didn’t understand, until it dawned on me that he was referring to the deer that were taking over Nara Park. The ride was short, which was a shame considering that he was the friendliest driver we encountered in Japan. He dropped us off at the back entrance of the park surrounding Todaiji, which with the pouring rain was a blessing.

The famed Nara deer gave us a cold shoulder as we walked into the park. Most of them were busy grazing in the lush grounds to even take notice of us, which made for a great experience of watching them from a distance. Except for the rain, this was where I would have preferred to have my deer encounter in. The greenery, the rather tame deer and the few visitors in this portion of the temple complex all made for a very pleasant stroll as we made our way to the entrance of Todaiji. It was another gate before we finally caught glimpse of this renowned temple. It didn’t look huge at first, but as we got on the direct path leading to it, I realized that it was massive.

Internally, I was a little bit apprehensive of entering this building. I knew it housed the Giant Buddha of Nara, the reason why people came here. Unfortunately, towering statues and images give me the creeps (yes, even Christian statues). But I was here, and I couldn’t pass up the opportunity of seeing this cultural relic just because of my irrational fear. Surprisingly, the Giant Buddha, though humongous, had a very calm aura. I didn’t feel too many moments of anxiety, or perhaps because there were just too many people around for me to feel any panic. This solidly cast bronze statue was marvelous in itself, but the surrounding gold images were also a class of their own. In contrast, the guard sculptures by the corners of the building had such terrifying expressions plastered on their faces that I couldn’t help avoiding going near them.

We went around the Buddha statue, and just before exiting, we saw the pillar that was dubbed as Buddha’s nostril. Here was where believers tried to get through a hole in the pillar, where they would be rewarded with enlightenment in the next life if they were successful in the task. A little girl and a slim lady were two successful stories; the others I saw walked in defeat. Amused with this tradition, we left the main hall.

To exit the temple complex, we made our way to the front entrance of the park, where we assumed more transport services were available. Just as we were leaving the wooden gate of Todaiji, the park’s famed animals began making their presence known. The deer on this area were more accustomed to tourists, especially to those who fed them. At times, they chased those who had food on their hands, which was not particularly a pleasant experience. One with antlers roamed freely among the throngs of people coming and going, while a bunch had lazily perched their bodies under the shade of a tree. Despite the pouring rain, the fame of the deer park and Todaiji was evident in the crowds walking around the area. Here was where I was truly grateful for our friendly driver earlier, as he allowed us to experience a side of the park that was also as pretty yet a lot more tranquil.

Because of the rain, no passing taxi was vacant. We opted to take the bus back to the station instead, as the taxi stand was farther away and we didn’t want to get more soaked. At the station, we perused the aisles of a grocery store at the basement, where we bought a few snacks and other instant meals before we headed back to Kyoto.

Our time in Nara was short but sweet. If I ever go back to the Kansai region, I know that I would like to be back in Nara for more amazing experiences. More on Japan next time, happy (virtual) travels!