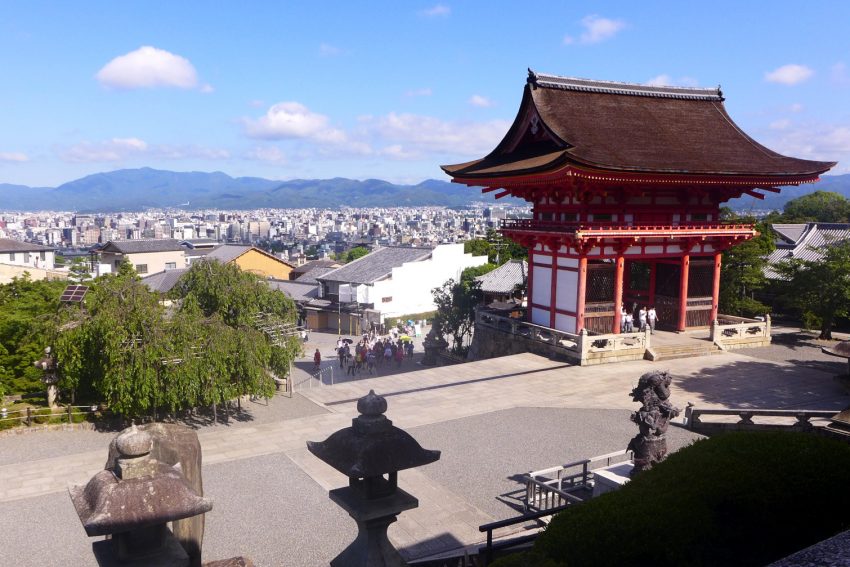 The steps leading to Kiyomizu-dera were almost devoid of crowds, a far cry from the sea of people standing there a few years back. Indeed, it paid to get to these places at a relatively early hour. No plum or cherry blossoms could be seen this time around. Instead, a sense of tranquility surrounded the area with the abundance of greenery. After passing by the towering entrance, we turned towards the pagoda, where we caught a glimpse of Kyoto and the surrounding mountains.

The temple was relatively vacant when we entered, save for a group of students presumably here on a field trip. The main hall’s exterior was covered in scaffolding during our visit, but its interior remained open for a tour. The ceiling, pillars and floors were all made of wood, steeped in history and enveloped in reverence. It was a shame that the famous wooden stage was then partially closed, but I was grateful that some portions were kept free from scaffolding.

Beyond the main hall, a steep flight of stairs led us to Jishu Shrine, where two love stones were located. It is believed that getting from one stone to the next spelled luck in love, a task made difficult when navigating through the distance of 18 meters, with your eyes closed and avoiding hitting or getting hit by another temple goer. With the increased popularity of these stones, a certain level of reverence in the area as a place of worship was lost and was converted into a thrill, an excitement of the possibility of getting fortunate in love. Moreover, since the area was a bit smaller, it felt instantly crowded when throngs of people began flocking in. I must say though that the shrine never lacked in beautiful altars, especially the ones at the back and in more secluded areas. When we were about to leave, a young female was successful in attempting her luck with a little coaching from her friend.

We continued on our temple visit, dropping by the other halls that were on the long downward slope from the temple. (A visitor could take the direct path down the stairs towards the Otowa Waterfall, or choose the paved trail with a gentle slope. We chose the latter, as my parents failed to go this route during our first visit.) It was here that we once again got a view of the main hall, along with a backdrop of Kyoto’s sprawling concrete landscape, including the Kyoto Tower. As we took a short pause in this area, I was drawn towards one of the smaller temples which housed many stone statues. I often wondered what these were, until I found out later on that these were Jizo statues, deities protecting children and travelers. No wonder I encountered them in many places in Japan.

On the way down the trail, hydrangea flowers were in bloom. One of the best views of Kiyomizu-dera was after the u-turn on the slope, where you could get a full frontal view of the main hall, its stage and its massive wooden beams. The canopy of trees were such a treat, along with the beautiful blossoms in season. At the end of the trail, several people were queued up for a chance to drink water from the Otowa Waterfall, with three streams signifying different aspects of life from which you could gain benefit. Like before, I failed to participate in this activity owing to the long line. (If I ever get the chance to go back someday, perhaps I’ll first check this place out first when crowds are thin.)

Finally, we exited through the pond and the garden. In a short while, we were back in the bustling lane of shops. I was happy to be back in Higashiyama, and thoroughly enjoyed this early visit.