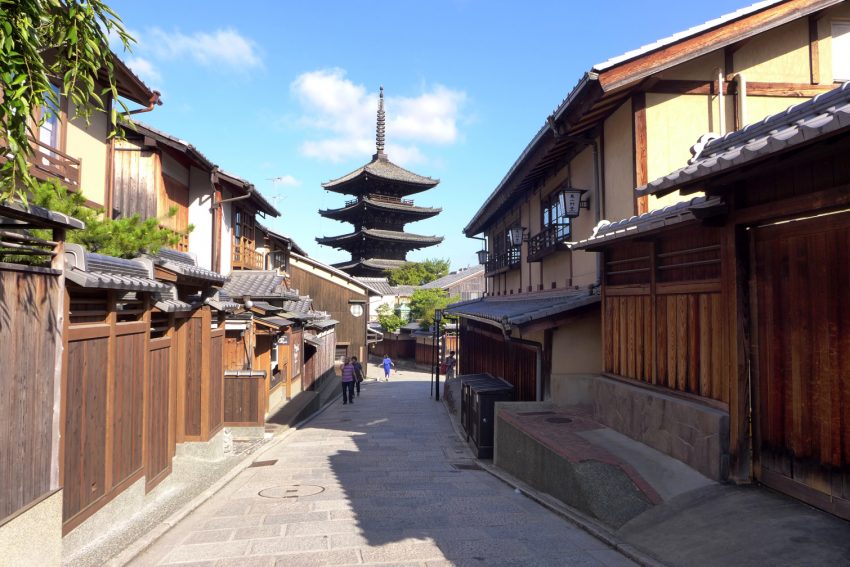 As it was my brother’s first time in Japan, we decided to revisit a lot of the must-see temples and attractions my parents and I went to during our first time. Among the highest on my list of places I wanted to rediscover was the area around Kiyomizu-dera. It was around cherry blossom season on my first visit, and the crowds were humongous. The street leading to the temple was filled with people, so much so that I was instantly reminded of Divisoria, a bargain shopping district in Manila full of crowds. The temple was one of the biggest draws of Kyoto, but I couldn’t fully capture its magic with throngs of people around. Granted, the crowds thinned soon as we entered the temple, but it was simply not enough. By the time we were strolling in the old streets of Sannenzaka and Ninenzaka, the sun had just set, so we were scrambling to go before it got too dark.

This time around, I was wiser. Without any regard to my brother’s jet lag, we got up quite early to be there before the vicinity got jam-packed with people. We took the bus and alighted one stop beyond Kiyomizu-dera, as I wanted to walk through Ishibe-koji alley first, before heading to the two famous pedestrian walkways. This was the start of our jaunt around this area. Leading up to Ninenzaka, a flurry of workers were busy heading to a construction site. At the entrance, two men greeted each employee good morning, a custom so strangely different from mine.

In Ninenzaka, the shops were still closed and the lane was devoid of tourists. It was indeed a leap back in time, and it was so difficult to peel my eyes from the wonderful vista in front and behind me. One of the simple pleasures I derived from this early stroll was admiring the little splices of front garden as well as the window displays that each store provided. We made a little detour to see Yasaka Pagoda, the quintessential view of Kyoto featured in many travel brochures. We even met a fellow Filipino here, who was a already a resident in Japan and who was kind enough to take a family photo for us. We headed onto Sannenzaka, where more typical Japanese storehouses lined the pathways. There were considerably more visitors, but nothing out of hand, and everyone seemed to be in a trance with all the beautiful architecture around. The weeping cherry tree was not in bloom this time around, but approaching the steep ascent provided a different perspective from before.

As the lane intersected with the main approach to Kiyomizu-dera, it was surprising to see the street quite empty. We had a little snack on the side of the road, until the flags leading tour groups became visible. Hordes of tourists were on their way up, which spelled that our little moment of tranquility would soon be over. We hurried to get to the temple, so we could have some time to roam around without struggling against the crowds.

More on this next time…happy (virtual) travels!