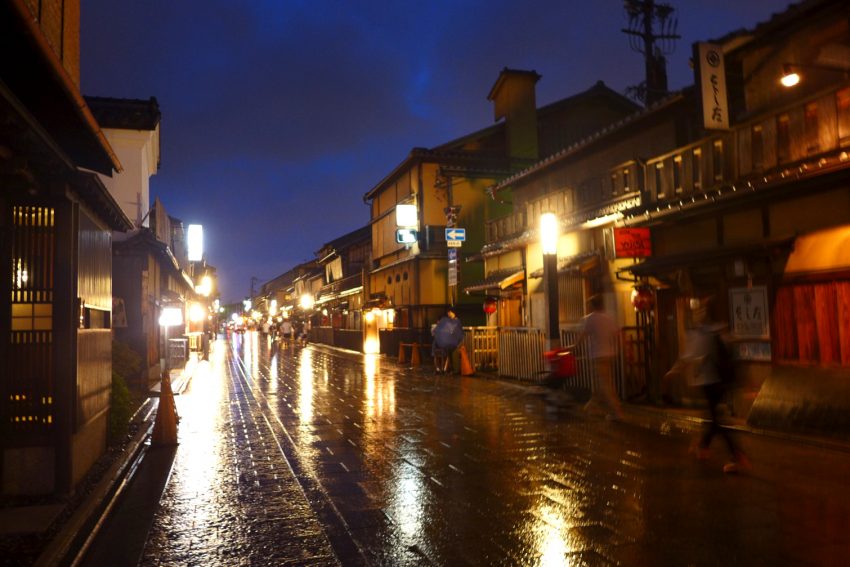 We emerged in Kyoto from our half-day trip to Nara with the sun still up. Our earlier excursion to Fushimi Inari and the subsequent rains at Todaiji rendered us exhausted. We would have wanted to call it a day, but we had a dinner reservation at one of Kyoto’s restaurants. It would be a modern rendition on kaiseki ryori, a multi-course meal in Japan. We headed back to our hotel to get some rest before we participated in this gastronomic tradition.

We left the hotel early and headed to the Gion district. Our taxi was directly in front of the kabuki theater, when traffic was stopped to make way for a procession. The famed Gion Matsuri was kicking off in town, and locals clad in traditional kimonos were taking part in the procession. Though not his fault, the driver profusely apologized for the delay; it truly amazed me how polite the Japanese were.

I asked not to be dropped off at the restaurant. Instead, I had the driver drop us off at another restaurant, which he said was a great find (I dared not explain to him that it was just a marker). It would be our final night in Japan, and I wanted to do something I longed to do before: to walk along the streets of Gion. We started this walk by the Shirakawa Canal, where a series of traditional restaurants and inns were located. From the street and across the canal, it was easy to see some activity inside these establishments. I could only hope to experience dining there one day. Red lanterns lined the pathway, and a shrine was situated at the end of the street. Willow trees added drama to this nostalgic vista. We crossed the canal to get to our next destination, Hanamikoji-dori, passing by a geisha school and buying some Kyoto sweet treats along the way.

It was already dark by the time we reached Hanamikoji-dori, the teahouse district made famous by the presence of geishas. Unbeknownst to me, this was not a pedestrian-only street. Vehicles plowed through the streets while wide-eyed tourists wandered around. It was a bit too dark for me too; I just didn’t know whether that was intentional, so as to remind everyone of how it was back in the good old days, or not. I was here for the architecture; I loved looking at the wooden panels, screen doors and lattice windows of the teahouses. The red lanterns added a charm that was uniquely Japanese.

I was intent in looking upwards to admire what I thought the attraction was until my mother blurted out, “Did you see?”

Oh no. I was busy looking at the buildings that I failed to see what was in front of me. I caught a glimpse of her kimono, but I did not see her face at all. Her face was so white, my mother said. My father and my brother made fun of me when they learned that I missed the opportunity. Unfortunately, my other fellow tourists followed her to the tea house she rushed into…one couple even entered the teahouse but left pretty quickly. No wonder photo bans were later put in place.

To be fair, I knew that geishas and maikos would arrive at the teahouses at around six, so at 7pm, I expected nothing. Little did I know that there would be one geisha who would rush from the nearby Gion Corner to one of the teahouses. I would have loved to see one of them–the culture truly intrigued me, but I would love to marvel at their beautiful kimonos and their hair decor–but it wasn’t my time. Besides, I wouldn’t think it’s fair to these cultural assets to be “hunted” by tourists, almost as if they weren’t human beings. I would think that the best way to do right by them was to book their services, but I was far from having such money to splurge.

Feeling a pang of disappointment, I led my family as we walked away from Hanamikoji-dori, crossed the Kamo River, and walked through a series of dark paths to Giro-Giro Hitoshina, where our dinner was waiting.

More details on that experience next time. Happy (virtual) travels!