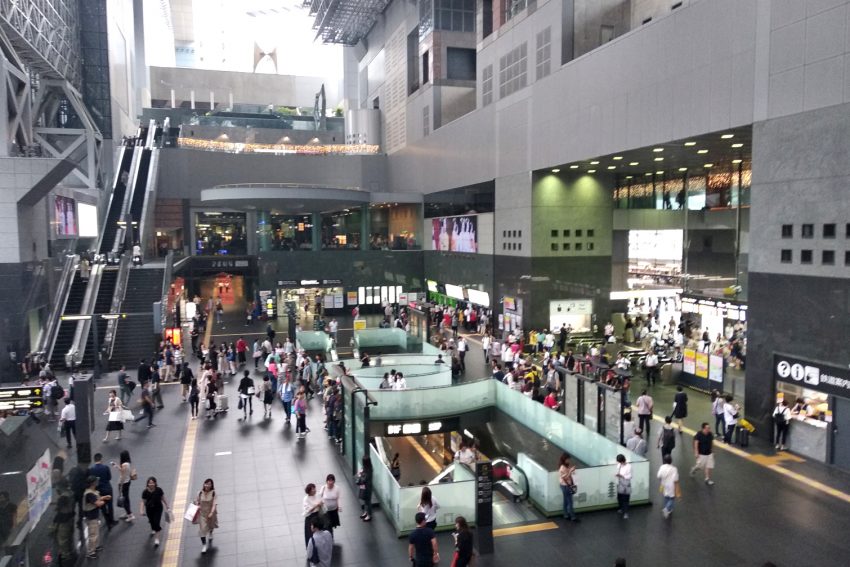 As we headed back to our hotel from Kinkakuji by bus, I suddenly had this idea of grabbing an early dinner at Kyoto Station. It was the terminal stop of the bus we were taking, and we would be lazy to get venture out from our accommodation once our backs felt the comfort of the bed.

The station is home to several restaurants, but we chose to have tonkatsu for our night meal. This deep fried cutlet was one of our favorite Japanese foods, and it was time to introduce my brother to this great gastronomic tradition. I once searched for tonkatsu places in Kyoto, but I had forgotten the name of the restaurant at Kyoto Station. Once we got to the station, I headed straight to the information desk where I tried to ask in Japanese if there were any tonkatsu shops in the station. The lady replied in English, suggesting restaurant names but the first one already rang a bell: Katsukura. She provided us directions to get to the restaurant floor, where most restaurants were empty as it was just past 6 in the evening. On the other hand, Katsukura had a very brisk business, and we were asked to wait for a few minutes before being seated.

We knew that we were all having tonkatsu sets, but we were able to choose the sizes of our pork. My brother went with the bigger one, while my parents and I opted for the smaller one. (Frankly, we didn’t notice a sizeable difference between the two sizes.) Like other tonkatsu shops, we were given individual suribachi bowls, where we ground up some sesame seeds while waiting for our order. It only took a short while before the tonkatsu sets arrived at our table. The rice was served in a common pot for sharing at our table; it was free flowing along with the heaps of shredded cabbage. With tender meat and a crispy coating, where else could this go wrong? It was a meal we thoroughly enjoyed — the crisp yet juicy meat balanced with the acidity in the cabbage’s dressing and warmed with a bowl of miso soup. If only we weren’t as quite full from our lunch, we could’ve enjoyed it a lot more.

By the time we got out of the restaurant, a queue had formed outside the restaurant. A lot of other establishments had begun their dinner rush hour too, and we were proven right with the decision of grabbing dinner earlier.

As the sun was still up at that time, we headed to the roof deck of Kyoto Station, where other sprawling views of the city could be had for free. The rail tracks could be seen just down below, and it would have been interesting to watch the trains come and go. Many concrete buildings took over most of the scene, bordered by mountains in the distance. Our sightseeing was cut short by a sudden drizzle, so we opted to leave the rooftop. It’s such a shame we didn’t get to visit the Skyway Tunnel, where we could be 45 meters directly above the main concourse. Next time, hopefully.

We headed down the building through the escalators beside the Grand Stairway. It was quite amazing to descend such height (more than ten floors) on a series of escalators, but there were moments when my fear of height would creep up, and I would get too anxious to look on the concourse below.

We then proceeded to Don Quijote, a discount store by the south exit of the station. Donki, as it’s fondly called by the locals, was overwhelming, especially for first-time visitors like us. It had cramped aisles and shelves brimming with products. It was definitely not a relaxing shopping experience, but I would visit again in the future.