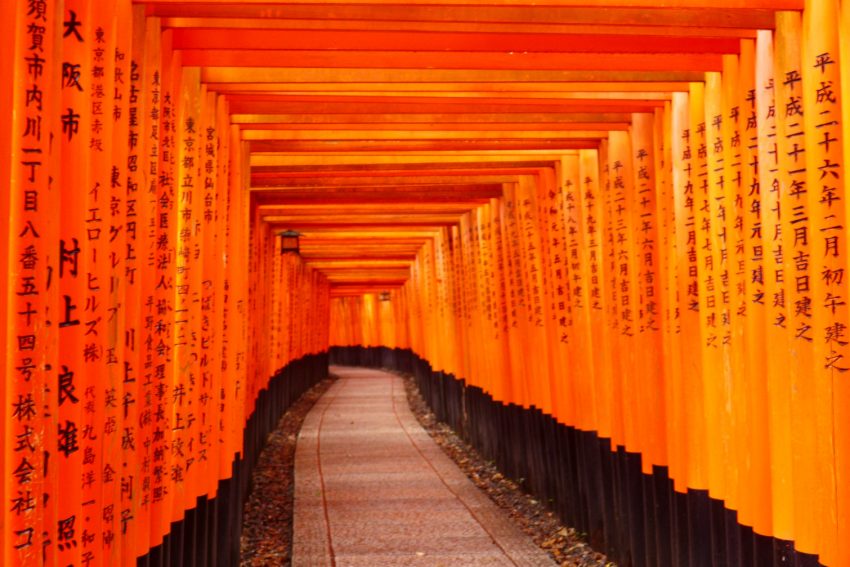 The train from Kyoto Station was jam-packed with passengers, but little did I know that almost everyone was destined at the same station: Inari. It was as if the entire train got rid of all its passengers, and everyone bee-lined their way to this photogenic Shinto shrine. Even by the grand torii gate, visitors were too plenty, enough to signal that our experience at this attraction would be far from spectacular.

The torii gates were beautiful, set in the midst of a forested trail just one station away from Kyoto Station. However, it was the multitude of people that made the experience less than ideal. Everyone had to follow everyone in the narrow trail. Stopping for a photo or to view something that sparked one’s interest meant inconveniencing the person behind you. I wanted to make it to the top, but the cumbersome journey was difficult to overlook.

That was the image that stained my first visit to Fushimi Inari Taisha. Determined not to make the same mistake again (we arrived rather late in the morning then), we ventured to this famous shrine earlier in the morning. True enough, the shrine was almost empty at this time (or perhaps the season was also a factor). Devoid of crowds, it was a pleasant stroll from the main gate uphill. On the first set of stairs, we chanced upon a Shinto priest performing his religious morning duties.

The star attraction for most visitors were the twin set of packed torii, which provided such beautiful backdrop when one took a photo. Unlike before, signs had been put up to direct visitors to go through the left side when going uphill, though, as always, some seemed to ignore it or were just plain oblivious to the rule. The shrine at the end of these torii gates were filled with more priests and a few religious worshippers, and prayers were ongoing at the site. I took a short peek through the screens: a priest was swaying a broom-like bundle (I assumed it was made of rice), while a prayer was being recited in the background. Not wanting to intrude the solemn ceremony, I quickly glanced away, but my interest was thoroughly piqued by the cultural experience.

My parents were game to go uphill this time around. Of course I knew that we wouldn’t make it to the summit, but it was enough to let them see the more-spaced-apart torii gates farther up the slopes. We took our time going down, even enjoying the lush landscape surrounding us. Yes, one of the best experiences visiting in the summer is the level of greenery in nature, and it was present in this shrine complex. The reds and oranges of these man-made structures contrasted sharply with the towering trees and lush foliage, a real feast for the eyes. A bridge emerged when we were near the main entrance, just before we headed out. We took a final glimpse at a pair of Inari statues before we bid goodbye to one of Kyoto’s finest shrines.

Later that day, we headed to Nara to visit another world heritage site. Until next time, happy (virtual) travels!