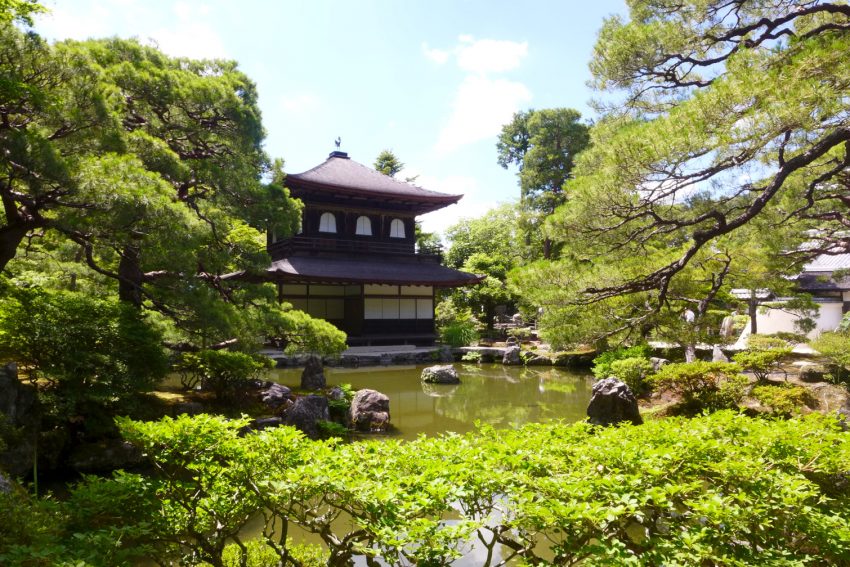 Shortly after our exploration of Nishiki Market, we were back on the bus to get to our next destination. Ginkaku-ji, or Silver Pavilion, stood in the shadow of Kinkaku-ji when it comes to popularity, yet this temple had a charm of its own. Of the Japanese places of worship, it got the top spot as my favorite. While the approach to the temple has become somewhat commercialized like Kiyomizudera’s, something that the Golden Pavilion escaped, inside the temple grounds was a totally different story. It was a refuge, a retreat to nature and a perfect place to reflect.

A small path of trees welcomed us, and instantly the Silver Pavilion greeted any visitor. The wooden structure paled in comparison to its golden counterpart, yet all around you were wonders of a Japanese garden. The conical mound of sand just in front of the structure was almost perfect, and it still mesmerized me how it was built that way. A zen garden of raked sand occupied a vast area, and anyone could take advantage of the shaded area for meditation.

Following the path, the typical Japanese garden of pond, plants and bridges soon took over the scene, interspersed with branches of trees hovering above the bodies of water. It was some of the prettiest vistas I had seen in Japan. Moving on, a small portion of mossy garden showcased itself as we took the steps uphill. Soon, a tiny bamboo grove presented itself, before a more natural portion of the temple emerged. It felt like we were suddenly in the forest, but the view of the sprawling neighborhood proved otherwise. Here was another magical spot of this temple: a beautiful view of Kyoto. From here, it was a short downhill walk back to the pavilion. We took some rest by the gift shop before making our way out.

Another aspect I enjoyed from this temple were the sweet treats from a shop close to the temple. Its ice cream was so good even in winter time, but on a rather warm day like that, it was simply glorious. The cream puffs, especially the matcha-flavored ones, were another favorite.

Soba for Dinner at Honke Owariya

As it was still early, we returned to our accommodation to get some rest before making our way for dinner. We were back in Shijo Street, but before heading toward Takashimaya where our dinner place was, we strolled around the area first. As it was around rush hour, this area was more unappealing than ever, and soon we took our refuge to the department store. Honke Owariya, a restaurant specializing in soba, was our choice, as soba is one food that Kyoto is famous for. It was my first time trying these buckwheat noodles in soup, so I didn’t know the nuances of its flavors. Paired with tempura, it was a fantastic meal, though I have more to learn about these Japanese noodles. My brother had a feast of his own with a massive set meal. Maybe I’ll have to try the cold version sometime, too.

That’s it for know about our Kyoto adventure. More on our trip next time. Happy (virtual) travels!