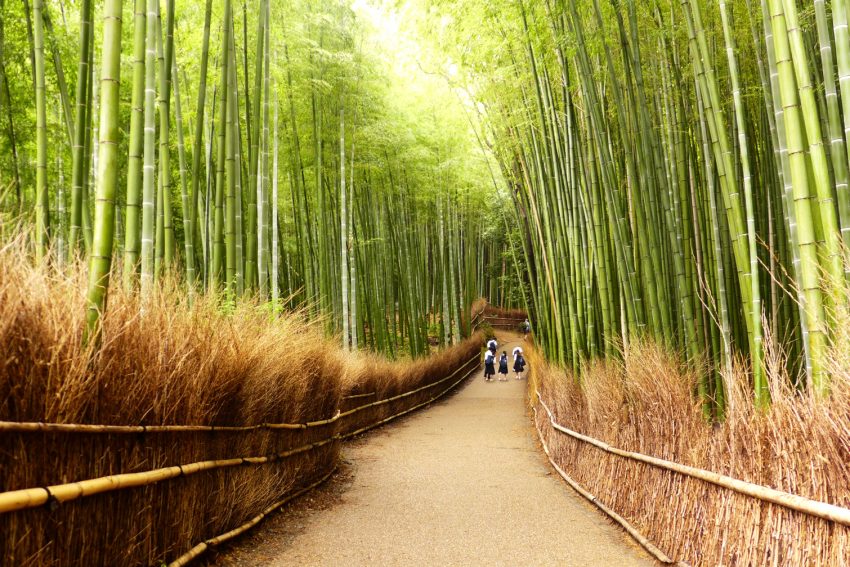 As I came across many travel photos of Arashiyama’s bamboo grove, I was intrigued. “Would you like to see a bamboo grove?” was the question I asked my parents on our first trip to Japan. The idea was shot down by a stern no, them having grown up in the province where bamboo trees were a common occurrence. Our time was very limited then, and though it was a bit disappointing not to see it, I silently vowed to visit if ever I get the chance to go back to Kyoto.

Four years later, we were back, and Arashiyama was one of the attractions I wanted to see upon our return. Though a little exhausted from our late arrival from Central Japan the previous night, we were up early to head to the bamboo forest. Arashiyama was extremely famous to tourists like us, that some even say that even arriving at 6 o’clock in the morning doesn’t guarantee that you’d have the place to yourself. It was a short train ride away from Kyoto Station. From Arashiyama Station, we took the easy way out — hailing a cab instead of walking. Along the way, several visitors were marching towards the touristy area. The taxi dropped us off right at the pathway to the bamboo grove.

At around 8 o’clock in the morning, there was no denying that this place was drawing more than its fair share of visitors. Even by the entrance, the bamboo trees stood proudly, though they were somewhat spaced out. Tourists bee-lined their way to the bamboo grove, though honestly, it was far less than the crowd I was anticipating (I guess visiting Kyoto in cherry blossom season had left its stigma on me). I even thought that some of those who started the walk from the main road suddenly disappeared somewhere along the way, that by the time we got to the bamboo grove, there were only a few of us capturing the tall splendor of these wooden poles. Because of the rainy season, these natural pillars were radiating in green, and it was mesmerizing to see their leaves on top sway giddily in the wind. Many photos later, we continued to walk until the end of the path, and as we headed back, more people were pouring in.

I was of the assumption that most of them visited Tenryu-ji first, and headed to the bamboo grove after their temple visit. We did the opposite by stopping by the bamboo forest first before making our way to Tenryu-ji. We entered through the North Gate, where its beautiful garden welcomed us. The hydrangeas were in full bloom, and moss covered most organic surfaces. Though I am admittedly a fan of Japanese gardens, I was stunned by the unexpected loveliness that the flowers and the green moss brought, even in this less-than-ideal weather. It would have been spectacular to stroll leisurely around the garden at a slower pace, but we had a lunch reservation in Kobe, so we had to move quite quickly. The pond that was usually featured in many photos of Tenryu-ji soon came into view, and the zen garden nearby was something to behold from the main hall of the temple.

We deliberately did not choose to visit the main hall of the temple, as my parents had been quite tired of temples as attractions and that we knew that we would be short on time to give it justice. Because we were rushing back to the station, we failed to even get a glimpse of the Togetsukyo Bridge, another draw in Arashiyama. We made it to our lunch reservation in Kobe, a tale I’ll share next time.

My parents later admitted that the photos we took in Arashiyama were some of the best we had in Japan. Surely, it might have been a photo stop, but it was one photo stop that was worth doing if you want the photos to remind yourself of the trip. I would highly recommend getting in Tenryu-ji, even just for the garden. I wish I could visit it again someday, with more time on my hands.