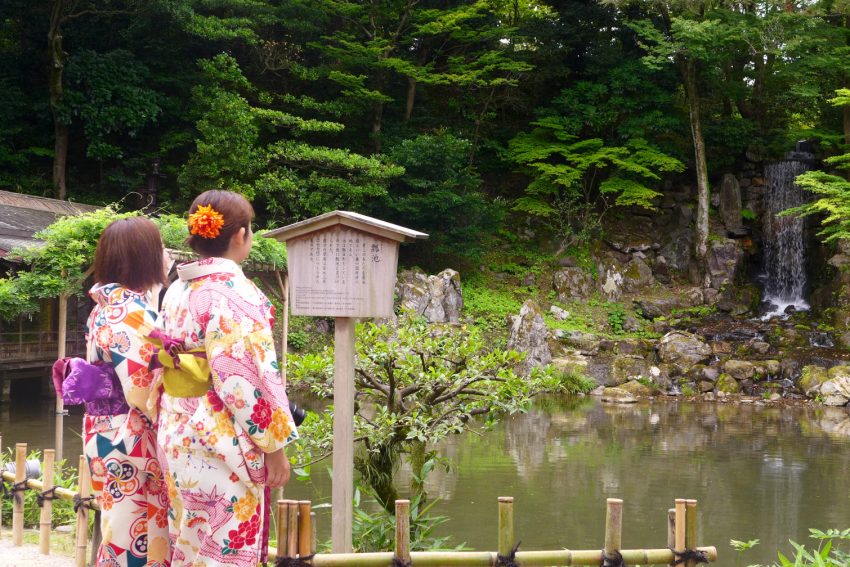 It was drizzling by the time we were ready to leave Omicho Market, but no weather misfortune could deter us from heading to Kanazawa’s claim to fame: Kenrokuen. Touted as one of the country’s top three most beautiful gardens, it was quite impossible to pass up on this attraction.

Our June visit, which was the beginning of summer, was far from perfect. There were no blooms, no changing colors of foliage and no snow-capped trees. Indeed, the garden was best described by one fellow traveler — it was like a big park in the summer with all the greenery around.

Not only was the season itself not the best, but late June signaled the start of the rainy season. It was gloomy on that day, then it started raining softly by the time we were ready to explore. We paused under the shade of the tree by the entrance, where we enjoyed our cones of ice cream. The stall had a giant ice cream cone displayed on its front, where a toddler came running to lick the imitation sweet treat which was almost as tall as him. It was one of the cutest, most hilarious things I saw on this trip.

Yet, even on its non-peak period, there was allure that only Japanese gardens provided. Just a short walk from the entrance, a spacious pond welcomed us with its iconic lantern and the teahouse at a distance. Pretty much all visitors flocked to this area as it was indeed a photogenic spot. The trees stretched their branches toward the pond, framing it beautifully. On the opposite side, a view of the city spread before our eyes.

Walking farther into the garden, shaped bushes of azaleas were scattered below the trees. It would have been marvelous in May, where the hot pink blossoms would have been in season. We reached the monument of Emperor Meiji, where the garden took a truly park-like ambiance. We strolled a little more, admiring the canopy of trees over a stream. We stopped short of the hill at the end of the park, which were home to trees that blazed in autumn.

The stream guided us on our way back. The bridges over this body of water showcased the best views, especially when one imagined the irises in bloom just below the trees in June, or more spectacularly, the cherry blossoms in spring. Smaller sections provided more private spaces. The path led us to a waterfall, where some visitors in kimonos admired the landscape. Very few people were around this area, and excluding the paved paths, it seemed like a forest with the humongous trees present.

We took the exit closest to this, where we strolled through another walkways lined with shops toward the main entrance. Kids were exiting the garden, obviously on a school trip with their uniforms and their matching caps. The Japanese fixation with discipline was evident as kids were truly very orderly in line as they crossed the street towards Kanazawa Castle.

We then took a ride to get to Higashi Chaya, another attraction of the city. More on this next time. Happy (virtual) travels!