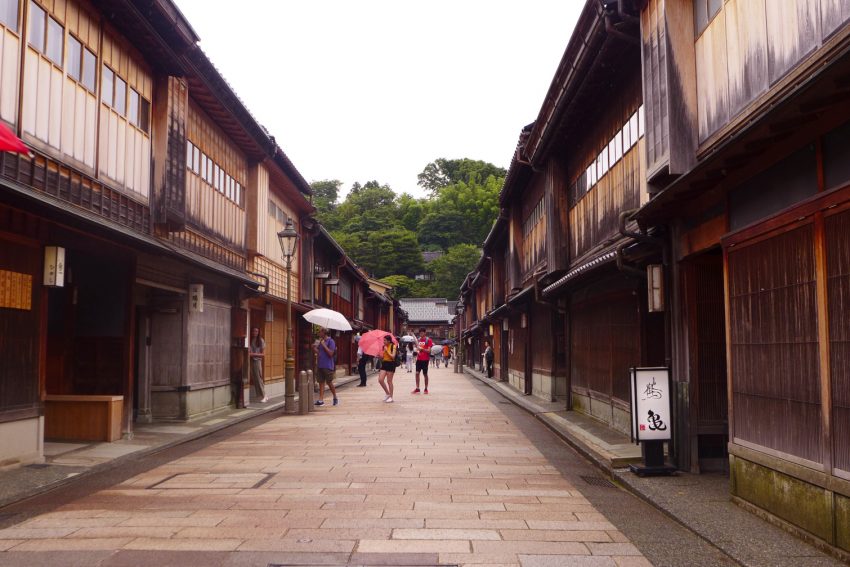 Following our visit to Kenrokuen, we decided to drop by Higashi Chaya, Kanazawa’s answer to Kyoto’s Gion. It was still relatively early for our journey to Takayama, so we opted to spend more time exploring this less popular city.

Higashi Chaya welcomed us with a light downpour. But, like the other tourists, we braved the drizzling rain to admire this cultural district. A willow tree danced in the occasional wind as it welcomed its visitors.

As we turned right to the main alley, two rows of former teahouses impressed us. It was mesmerizing to see old architecture so intricate, yet had a semblance of lightness that was typically Japanese. These wooden structures had very clean lines, yet they complemented the organic curves of the natural landscape that served as its backdrop. Some looked too modern for its time, with the steep roof lines and their minimalist windows and screens. The wooden panels had an interesting red hue for some, while others took on a gradient that sharply transitioned from a light color to a deep grey. Several walls showed off a grid-like design, but perhaps it was the construction that prompted its unintentional aesthetics. What I found a little bit distracting was the road. I felt it was too new, too park-like for a wonderfully-preserved geisha district.

Unlike many other teahouse districts, this was relatively empty. Even the buildings themselves were devoid of large signages that could’ve spoiled the historic atmosphere. Things changed however as we turned to a smaller alley, where a few could be seen hanging. Electric towers and lines plagued the vista, but it might have been unavoidable to render the main alley “spotless”. The side alleys had an allure of its own, though. The walkway was a lot narrower, which not only provided a cozier atmosphere, but also made us truly imagine what it was like to walk along these paths several centuries ago. Some shops even had small front gardens, akin to those we saw in Kyoto but a lot simpler. It would have been lovely to get lost wandering around the area, simply marveling at the traditional Japanese architecture…if only we had more time and the weather was kinder. We would’ve wanted to stop by a coffee shop in this area, especially with the weather souring, but we opted to head back to the station instead.

Note: I never expected to be able to squeeze in Higashi Chaya in our itinerary, and quite frankly, I knew very little about the area. I didn’t know that teahouses were open to the public (yes, it was very foolish of me), and we greatly missed having a cup in this atmospheric area.

At Kanazawa Station, we had a stroll around a small shopping area and sat down for coffee at Kanazawa Chitose Coffee. As the shop was small, we could see the barista prepare the pour-over coffee while we waited for our orders. The coffee did not disappoint — I couldn’t shake my belief that Japanese people are truly specialists in their chosen crafts.

It was time to say goodbye to a city that pleasantly surprised me. I don’t understand why it doesn’t quite get the fame of other Japanese cities, but it deserves to get its fair share of visitors. Somehow though, I could only wish that it wouldn’t be overrun with tourists, as it was one of its major advantages over other more popular destinations. A market, a garden and a geisha district: they were enough to convince me that this was a city worth returning to. One day, I hope I will.

More on our Japan adventure next time. Happy (virtual) travels!