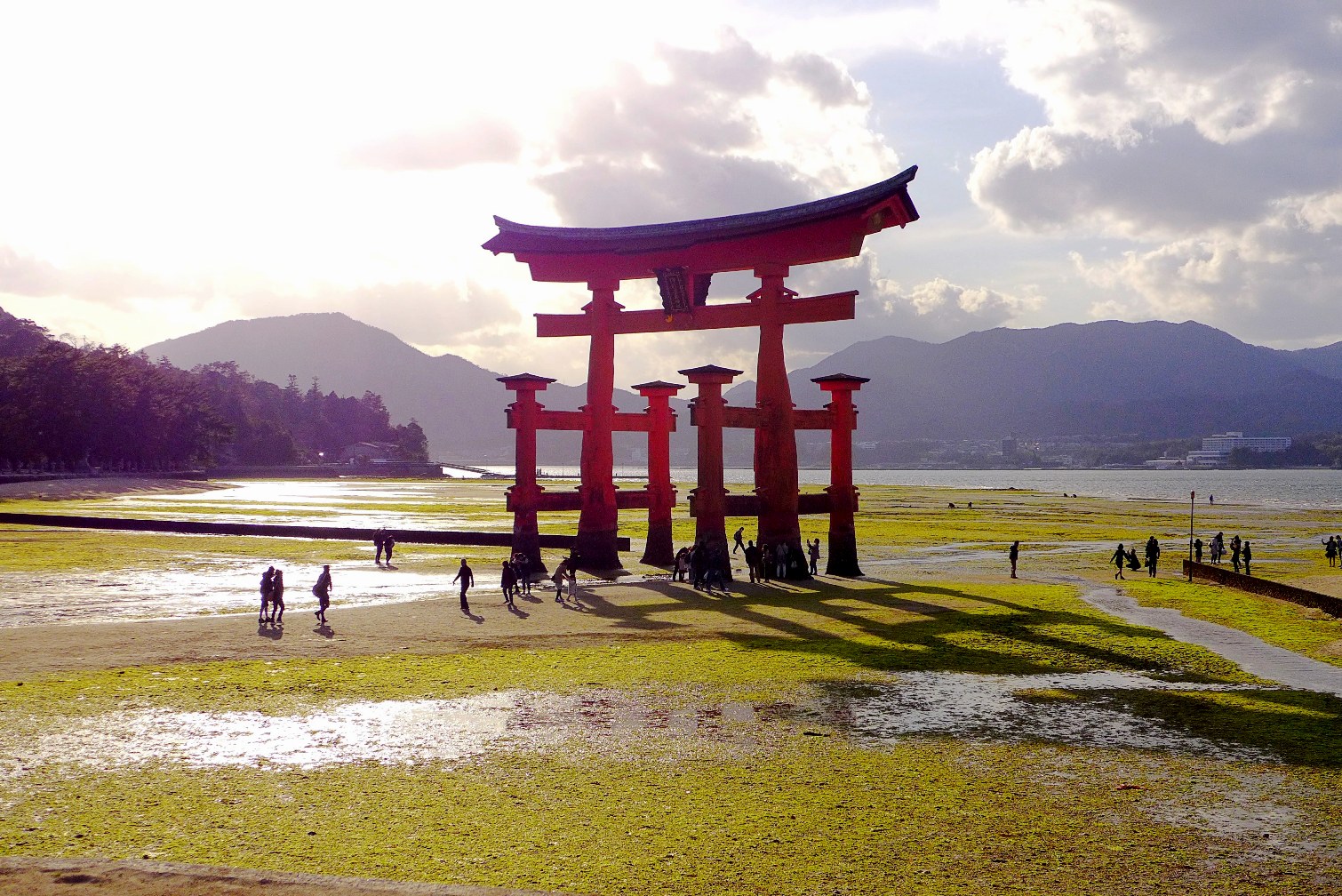 Japan gave us a cold welcome, literally. While the temperature soared during the first half of March, it suddenly dropped by the time we arrived. Yet, our short stay made us move our butts to see the most that the wonderful country can offer.

We made the city of Osaka our base for our short trip, and made excursions each day to see different parts of the Kansai and Hiroshima regions.

Less than an hour from Osaka, Himeji Castle stands beautifully with its white façade. You could even catch a glimpse of it when you’re riding a train bound to the western parts of Japan. The train station lies about a kilometer away from the castle entrance, but as I was with a group of older folks, we opted to take the Loop Bus instead.

The Loop Bus delivered us right in front of the Castle. Its moat was alive with water and koi and the wooden bridge looked perfect in its place. Our visit was a few days too early, though.

The cherry trees at the front of the castle weren’t in bloom yet. Worse, we were a few days shy of the castle interior’s opening. The bright side of our visit was that there weren’t too many people around, making this one of the most pleasurable visits to an attraction in Japan. (You see, Japan’s attractions are just brimming with tourists.)

A cherry tree was blooming in its early stages inside the castle compound, an experience I thoroughly enjoyed since it was my first time to see cherry blossoms, Japan’s favorite flower. The castle’s stone walls, tiled roofs and wooden gates were all massive, yet exuded a delicate balance between grandeur and simplicity. Viewing the castle on its corner was best, since it showed a lot of depth to the otherwise flat white façade. How I wish we could go inside the castle itself. 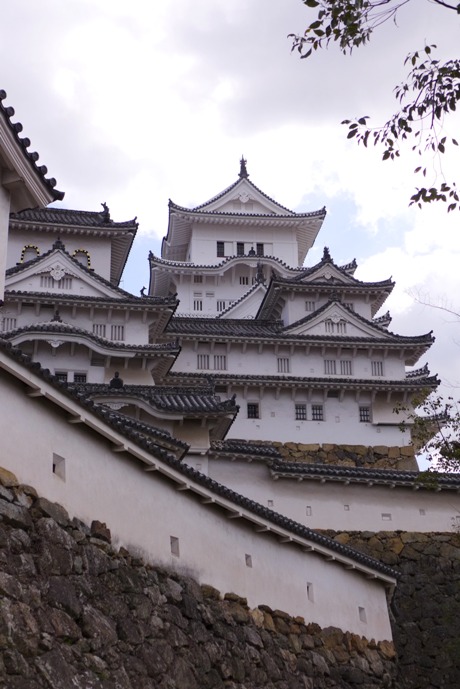 After taking that short stroll around the castle compound, we took the Loop Bus back to the train station, allowing us to see a little bit more of Himeji — its park, a museum building and an older street. We bought some ekiben, bento boxes found at train stations, and took the shinkansen nozomi to Hiroshima.

The streetcar from the train station to the Peace Memorial Park was slow, yet very rewarding. It afforded us views of the city on the ground level and a glimpse to local culture. Apparently, Hiroshima is such a progressive city! I never imagined to see a modern city, at least not after the devastation that the atomic bomb caused.

The Atomic Bomb Dome was in partial cover during our visit. They were doing a structural stability test to the dome, something done just once every three years. The empty tree branches gave a more eerie look to the already scary dome. A photo of the building before it was bombed was shown, but the present one hardly resembles its great counterpart in the past.

However, the park is alive. People from all over the globe visit to remember the people who lost lives during the war. Some Japanese offer their prayers at every shrine in the park, while others offer their one thousand paper cranes. An eternal flame is lit just in front of the cenotaph marking the peace memorial. Behind it, the museum is open for anyone interested in knowing more about the tragedy. The memorial museum was a no-go for us — one, we’re pressed for time; two, I’m not sure if I could bear the strength to witness the damage that the atomic bomb brought forth.

Children ran freely around the Children’s Memorial, a sad, sobering irony that dawns to any visitor. People strolled around the park as if it were just an ordinary park, but everyone was mostly silent, as if relating to the tragedy that occurred so many decades ago. A sound of the bell keeps you awake though — the bell of peace — reminding everyone of the call for peace.

We left Hiroshima in a streetcar bound for Miyajimaguchi, the jump-off point for Miyajima.

Hungry from our day’s adventure, we decided to sip some hot udon in Miyajimaguchi. It was my first time to taste Japan’s unagi, or smoked eel. The noodles were very chewy, though the broth was a little bland to my liking. After our meal, I played with the vendo machine for a cup of coffee, a tricky endeavor since the labels were only in Japanese characters, until I finally got the hang of it after three tries.

The ferry ride to Miyajima was quick, and the ferry wasn’t too full. I initially thought that there weren’t a lot of visitors here too, just like in Himeji and Hiroshima, until we docked and disembarked. Tourists were abundant in this island, just like deer!

We walked along the shore to the Itsukushima Shrine. Sadly, the tide was at its lowest point during our visit (a trade-off I took in order to visit all these three places just in one day). The upside was that we got up close to the shrine, and we were able to put coins on the torii gate that is believed to bring good fortune.

Though we planned to stay until sundown, the cold weather and strong winds prompted us to depart earlier than expected. We took the way back to the ferry terminal through Omotesando Shopping Street, looking around the souvenir shops and restaurants. The giant spoon was hard to miss! Ofcourse, we didn’t leave miyajima without trying their momiji manju (custard and peach were my favorites) and a stick of nigiri ten with cheese and bacon. 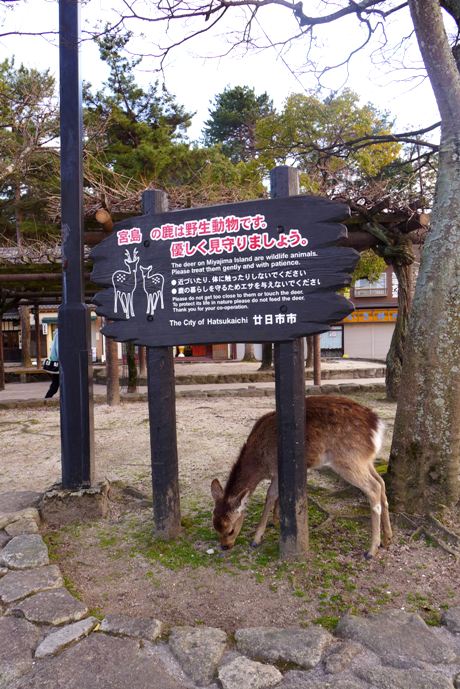 We headed back to the ferry before darkness fell to make our way back to Osaka. 🙂

2 thoughts on “Himeji, Hiroshima and Miyajima in One Day”