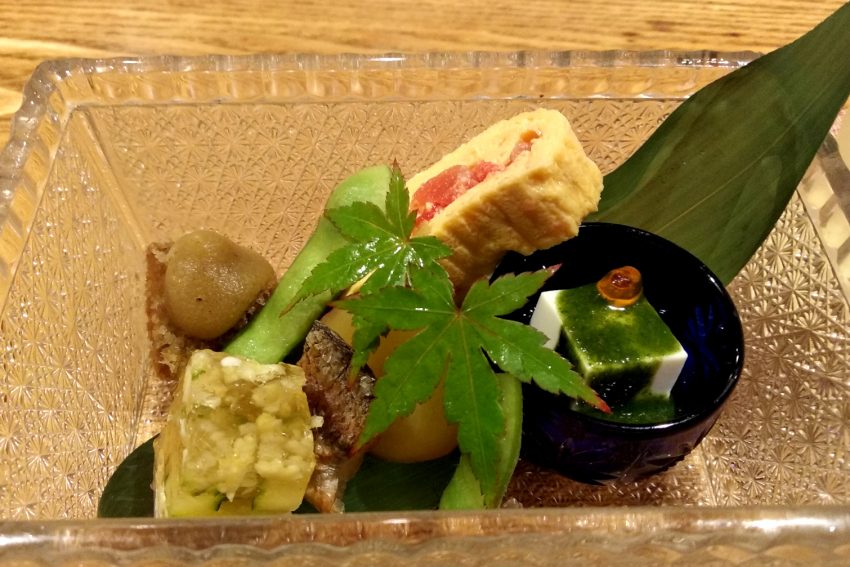 The dark streets leading up to Giro Giro Hitoshina were enough to dispel most of my excitement for the meal ahead. Though I knew that Japan was safe, there was an eerie feeling that I couldn’t shake off as we navigated the dimly-lit paths. Even the alley on which the restaurant stood was almost barren, with no visible life as one looked from the street.

It came as a surprise that a brisk business was ongoing behind the lifeless facade. The lighting was bright and the ground floor was cramped, but it was cozy at the same time. Our reservation came with a request for counter seating, to which they obliged. Though the restaurant would be serving a modern twist to this traditional meal, it would be my first kaiseki meal nonetheless. Except for the small dishes that were served one after another, I knew very little of this gastronomic tradition. All I wanted to do was to enjoy this night with my family.

Truth be told, I expected little with this meal. I had been burned before by photos of great looking dishes, but were far from stellar when it came to taste. The Japanese, honoring their age-old tradition, manifested such exquisite interplay of visual delight, taste and texture that most mouthfuls were unique and interesting. I later learned that there was a sequence to this meal, but unfortunately I did not take much note of it. Luckily, the chef spoke some English, and he was able to describe every morsel of food he served us. Here were the dishes that made up our meal:

We started our meal with two slices of fried maki in edamame sauce. It wasn’t the strongest of flavors, but the crispy texture of the light batter was a good contrast to the otherwise soft morsels.

It was quickly followed by a plate of interesting items: a Japanese omelette with tomatoes, two edamame pods, a fried fish with eggplant sauce, a cube of vegetable jelly, a boiled root crop I assumed was sweet potato, and a tiny block of tofu served in spinach and salmon roe.

It was a beef soup with tomatoes, taro and a citrus rind. Meant to be a palate cleanser, it was slightly acidic, but very fresh.

Though I was familiar with such flavors given our traditional sinigang, this Japanese rendition had the most delicate of flavors. The mild citrus taste was not overpowering the beef, whose meaty flavors still permeated throughout the broth. The clarity of the soup was also something to be commended. This was definitely one of the my top dishes.

Next came the sashimi. Three slices of flat fish were served with shredded zucchini and some seaweed. A small dollop of wasabi was provided, as expected. It was another lightly flavored dish, as expected with the thin slices of the fish. I honestly have so much to learn appreciating these delicate fish flavors.

An eggplant drenched in a sauce made of miso, egg and oysters followed. It was topped with tomatoes, cucumber and pepper, and garnished with nori. From only the description, I was hesitant, but it turned out to be my favorite dish among all that I tried. Miso and eggplant had become a famous combination in the culinary world, but the addition of egg and oysters made the sauce not only a flavor bomb, but also an authority in creaminess. It was so good, but I unfortunately consumed the entire thing without photographing it!

Another palate cleanser came in the form of fish, grape vinegar jelly, shredded ginger and some cucumber. Instantly, it reminded me of kilawin, a Filipino dish of vinegared dish, though this one in front of me had better techniques and a culinary finesse. The jelly melted in my mouth, providing a tart dressing to the fish. The fine juliennes of ginger imparted texture and some small spicy kicks. I wished I could have more!

A bowl of corn tempura rice, pickles and some miso soup, like many Japanese meals, rounded up this kaiseki course. It signaled to me that our experience, sadly, was drawing to a close.

Finally, dessert was served. Seasonal fruits, green tea jelly and red beans in syrup were provided. It was a sweet ending to this memorable meal.

Flavor-wise, most dishes were very subtle, except for the miso, egg, oyster sauce in the eggplant dish. There was a lot of restraint in using bolder flavors, perhaps to showcase the fresh and seasonal ingredients. Until I learn to recognize the nuances of these flavors, I would find it difficult to appreciate the meal in its entirety.

Don’t get me wrong, I loved this kaiseki meal. The culinary techniques as well as the beautiful plating were magnificent to me. I enjoyed interacting with the chef, no matter how little Japanese I knew. I found observing the chefs prepare the dishes entertaining; it was like watching a performance art of sorts. Giro-Giro’s rendition on this multi-course meal was modern, and the atmosphere was a bit relaxed, making it a very good first experience.

This Japanese gastronomic experience certainly was not the cheapest of endeavors. But unlike many restaurants offering kaiseki ryori, Giro-Giro’s was priced very reasonably. Our meal set us back around 4500 yen per person, including the drinks we ordered on the spot. It was definitely on the more affordable side of the kaiseki ryori price spectrum, and I hope to find other restaurants providing such quality meal at these reasonable prices. It was surely worth the splurge.

Like any performance, nothing will remain the same. The produce used were mostly seasonal, and chefs were known to change their menu to suit the season and to showcase the best produce available, making this truly a once-in-a-lifetime experience. Yes, I loved this experience so much that I look forward to the next one, whether that be in Giro-Giro again or anywhere else in Japan…I wonder when that will be.

Until the next tale, happy (virtual) travels!