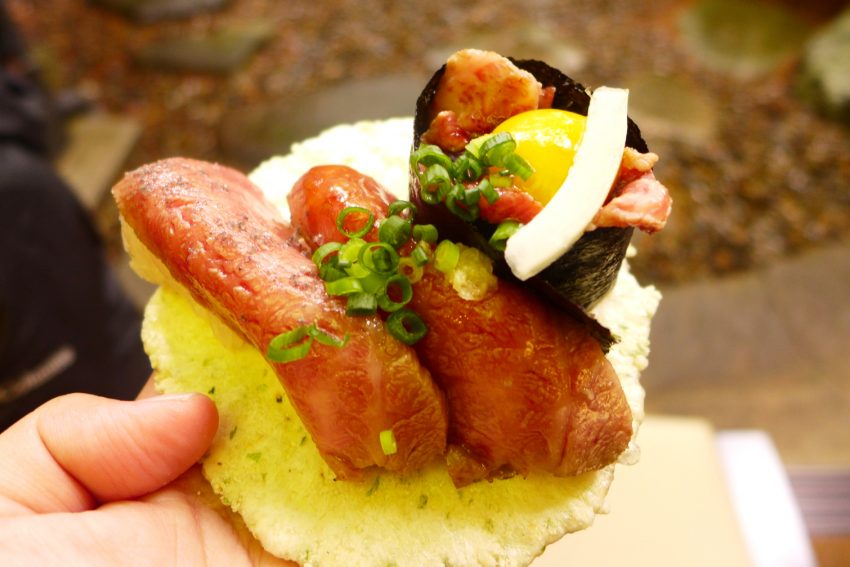 On this trip, there were a lot of gastronomic delights we experienced. I had long associated Japanese cuisine with something good, but quite mildly flavored compared to its Asian neighbors. While this bias resonated in most dishes we tried, there were some that proved me wrong. What I realized on this trip was that most food places gave a dish justice by doing things right, and that expertise in technique or preparation made the dish truly shine.

Our first wagyu experience was a yakiniku-style Hida Beef from Takayama. Of the four provided cuts, the beef cubes were my favorite, and they truly exceeded the melt-in-your-mouth texture that made wagyu famous. Our Kobe beef lunch was done teppanyaki style, which we found less spectacular than Hida Beef. I now wonder how Kagoshima Beef, the latest winner of the wagyu Olympics, taste like. Maybe I’ll get the opportunity to taste it when we visit the island of Kyushu one day.

Trying belly fat tuna was one of the things that excited me the most. Because it was already afternoon by the time we got to Kuromon Market in Osaka, only chutoro, or the medium fatty tuna, was available. It was definitely more tender and less intensely-flavored than the regular tuna slices, but I’m not sure whether its hefty price tag was worth the splurge. I am biased though, as I tend to favor salmon sashimi over its tuna counterpart. Kanazawa’s Omicho Market stole our hearts in this regard, as it offered us some wonderful salmon sashimi at very good prices.

Though I didn’t intend to eat at a sushi restaurant on this trip (budget was limited, so we had to prioritize our food experiences), I wanted to make my brother try the cheaper alternative: a conveyor belt sushi restaurant. The one I was eyeing was full when we dropped by, and we never had any opportunity left during the other days we stayed. We were able to try two other different sushi kinds though. The first was some Hida Beef sushi in Takayama, where torched beef slices sat on top of the molded rice instead of fish. A gunkan sushi with a yolk was life-changing. Honestly, I was initially grossed out by the idea, but tasting it was one of those aha moments. It was delicious! Creamy and beefy, it was one bite worth having again and again.

Nara’s kakinoha-zushi was also something we tried, since it was a specialty of the city. It was sushi wrapped in persimmon leaf, although its mackerel variant had a flavor profile close to our own paksiw. It was worth a try but it wasn’t my favorite.

Cost: Around 2000 yen for a set meal of soba and tempura at Honke Owariya; less than 1000 yen for a bowl of udon or ramen

Kyoto was famous for its soba, and so we had to indulge in it while we were there. Honke Owariya was touted as one of the best, and it certainly did not disappoint. We all tried the hot/soup version, which was clean and mild tasting so it highlighted the nutty flavor and the coarser texture of the soba. The tempura sides were a good addition. Udon was my favorite noodle though, but the one we had at Kansai Airport wasn’t the best. It was good enough to satisfy my craving for these thick, chewy noodles. The only ramen we tried was in Takayama, which was in a shoyu broth. It was tasty, but I must say that ramen in general was still my least favorite among the three.

Cost: 200 yen for 6 pieces of takoyaki at Karikari Harase at Nishiki Market; less than 1000 yen for one okonomiyaki from Ajinoya

Takoyaki and okonomiyaki are both Osaka specialties, but we had takoyaki in Kyoto on this occasion. It was only my third attempt to eat takoyaki, but I still didn’t find these fried octopus balls appealing. I’m not sure if I’ll ever find some that I’ll enjoy, but I want to keep trying.

Our okonomiyaki meal was from Ajinoya, and boy was it scrumptious. I only had this vegetable pancake once before, yet this second time was enough to make me crave for more. It was simply delicious and very filling too!

My craving for eel began in Kyoto, heightened in Osaka, and was finally answered in Kanazawa’s Omicho Market. Most of these seafood sticks were priced quite heavily in Kansai, but it was relatively cheap in Kanazawa. The quality? Superb. The outside was crisp from the hot coals, yet very tender on the inside. Its texture reminded me of grilled catfish, but this was drenched in a sweet soy-based sauced. I loved it.

We were able to try three of these Japanese sweets on trip. First, we had some disappointing dango from Nishiki Market. Next, we bought some warabi-mochi, a Kyoto classic confectionery, from another stall in the market. Its bitter notes hit you just as soon as you bite it, but the flavor mellows down after some time. It was very chewy though. Finally, we brought home some yokan, which were jelly-like bars. I enjoyed the chestnut (I think) flavor more than the matcha.

There were also Japanese versions of western sweets that we were able to sample. I must say I loved these confections as they weren’t too sweet and very creamy. Ice cream cones were our favorite, especially with the heat of summer. Cream puffs were also another hit for us, especially the matcha flavored ones. We also had some cheesecake from Pablo, which we just bought from the convenience store. It was creamy and sweet, with hints of bitterness from the green tea, but it was a bit too pricey for such a small cake.

Cost: Around 2000 yen for a dinner meal set at Katsukura Kyoto Station

Eating at a tonkatsu restaurant was still one of my favorite Japanese meals. The tender and juicy pork shone amidst the crunchy coating. From grinding the sesame seeds to completing the meal with miso soup, pickles and rice, it was an enjoyable Japanese dining experience.

Cost: Around 4500 yen for dinner at Giro-Giro Hitoshina for one person

The meal on our final night in Japan was very memorable. It was our first time sampling Kaiseki Ryori, a traditional multi-course meal, but we had one with a modern twist. I loved the theatrics of the experience, as well as the flavors, textures and techniques that came with every bite. I’d love to have more of this kind of meal given the chance (if the budget allows, that is).

Of course, I couldn’t make this list without mentioning our convenience store finds. From the simple sandwiches to onigiri, from karaage to bento boxes, and from rice crackers to wasabi chips, there was simply too many goods to try. Sometimes they disappointed, but they were quite good most of the time. Most of our breakfast came from the convenience store too. At one point, we even had to wait for the opening of the konbini at the train station, as we were getting on a very early train. There were also times when it was too late or we were too tired to even bother eating out, and we made do with what we could find in the store on our way home. Though these on-the-go food might not be the healthiest of choices, they were very budget-friendly and good-tasting.

We also enjoyed trying different varieties of drinks offered by the vending machines by the roadsides. As it was summer, my favorite was Craftea’s peach tea.

All in all, we had a feast in Japan. Cost-wise, we tried to balance out our splurges with the budget options. Was it worth all the money? I’d definitely say yes. We had new experiences that would last us a lifetime and a lot of discoveries about Japanese food culture. I can’t wait to go back and have more of Japanese food.