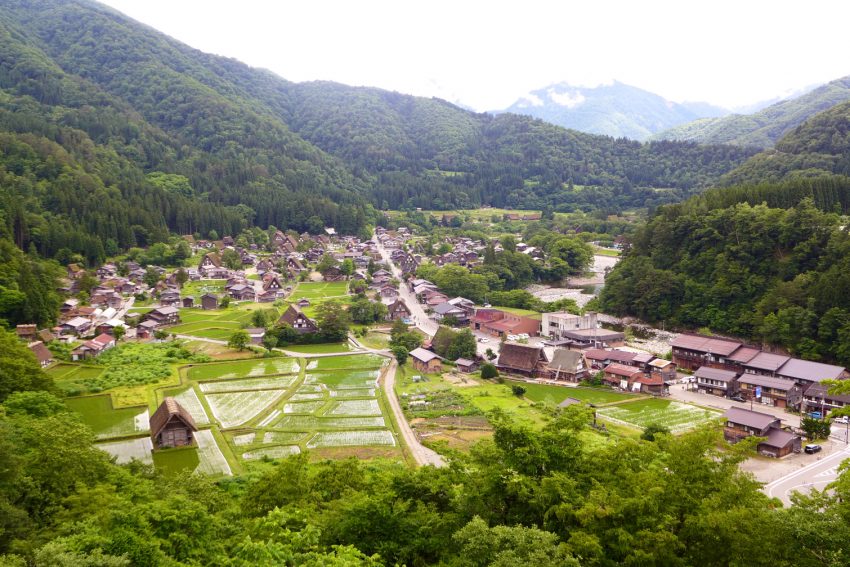 While booking this trip to Japan, I initially intended a relaxed vacation where we would just explore the city of Osaka a bit more, eat some of their fantastic food, and do some sightseeing in Kyoto. With my brother joining us, it had suddenly evolved into a jam-packed itinerary full of ‘must-see’ attractions. We were gladly revisiting some of Kyoto’s most famous sights for my brother’s sake, but I wanted to venture somewhere else again. In 2015, it was Himeji, Hiroshima and Miyajima. Not wanting to do the same thing again, I opted for the Japanese Alps instead.

The village of Shirakawago was the biggest reason I wanted to visit this region. The photos of this UNESCO heritage site were truly remarkable, and as a lover of old towns and villages, I wanted to see the houses in person. The problem was that it would take more than four hours to get there from Kyoto, and doing it as a day trip would seem too much hassle for the amount of time left exploring the village. We then decided to extend it to a two-day affair, including the city of Kanazawa which was along the route. But, I was greedy. I wanted more. Hence, I managed to squeeze in the historic town of Takayama. It was a bit hectic, but it was truly a memorable side trip.

Day 1 Kyoto to Takayama via Kanazawa

Our journey began early in the morning by riding the first scheduled Thunderbird Limited Express from Kyoto to Kanazawa. After enjoying some seafood at Omicho Market, we proceeded to Kenrokuen Garden, before heading to Kanazawa’s geisha district. We strolled around Higashi Chaya for a little bit, before bidding adieu to the city.

Seeking refuge from the rain, we spent some time at the station before taking the shinkansen to Toyama, where we took the Hida Wide View Limited Express and were blown away by the scenic views of the Japanese Alps. The rainy night welcomed us in Takayama, as we enjoyed our Hida beef yakiniku dinner. This was also where we spent the night on this two-day side trip.

Day 2 Takayama to Kyoto via Shirakawa-go

Our morning in Takayama passed by quickly as we explored Miyagawa Morning Market, before heading to Sanmachi Suji, the town’s famous historic alleys. Our visit was cut short by the sudden downpour, but it allowed us to discover Takayama Jinya, a former government building. We returned to Sanmachi Suji where we ate the famous hida beef sushi (the gunkan one was amazing!).

Shortly after lunch, we boarded the bus bound for Shirakawa-go, our final but most anticipated stop. The observation deck was our first destination before exploring the village on foot. We paid a visit to Kanda house, where we saw the underbelly of the steep thatched roofs that made the village famous.

We took the bus to Kanazawa before sunset, before getting on a Thunderbird Limited Express for a late return to Kyoto.

What I Would’ve Done Differently

In hindsight, we could’ve squeezed in one more attraction in Kanazawa, considering we had plenty of dead time in Toyama. Back then, I was hoping that the weather would turn better in Toyama so we could have some black ramen, but that didn’t happen.

If money was not a concern, it would have been easier to simply head to Takayama via Nagoya on Day 1, spend the entire day there before hopping on the bus to Shirakawa-go to spend the night. A minshuku or ryokan stay would have certainly added to the experience (though it was not fitting in our case due to my parents’ lack of mobility). An early stroll around the village and a hike up the observatory would have been feasible on Day 2. Kanazawa would be waiting to be discovered later in the morning until the afternoon.

Of course, if we had more time, a longer side trip would have been preferable. 🙂

Will I do this again?

Unlike my crazy Himeji, Hiroshima and Miyajima in One Day side trip, I would do this again in a heartbeat. Sure, it was a bit rushed, but we got to see a side of Japan that we otherwise wouldn’t have if we stayed in Kyoto. It allowed me to appreciate the country even more, and I am eager to see these more remote areas of Japan. My father was even interested in Tateyama-Kurobe Alpine Route, which he saw on one ad in Takayama’s bus station. During our train and bus rides, I tried my best to keep my eyes open so I could view the scenic mountains and lush fields. What I know for certain is that I couldn’t wait to get the chance to see more of Central Japan and the Japanese Alps.

I’m sure this kind of travel isn’t suited for everyone. But if you’re planning something of the same sort, I hope this helped you somehow. Central Japan is beautiful, and it captivated my heart tremendously. I hope you also get to explore this region.